Can You Sue Someone For A Tweet That Induces Epilepsy? 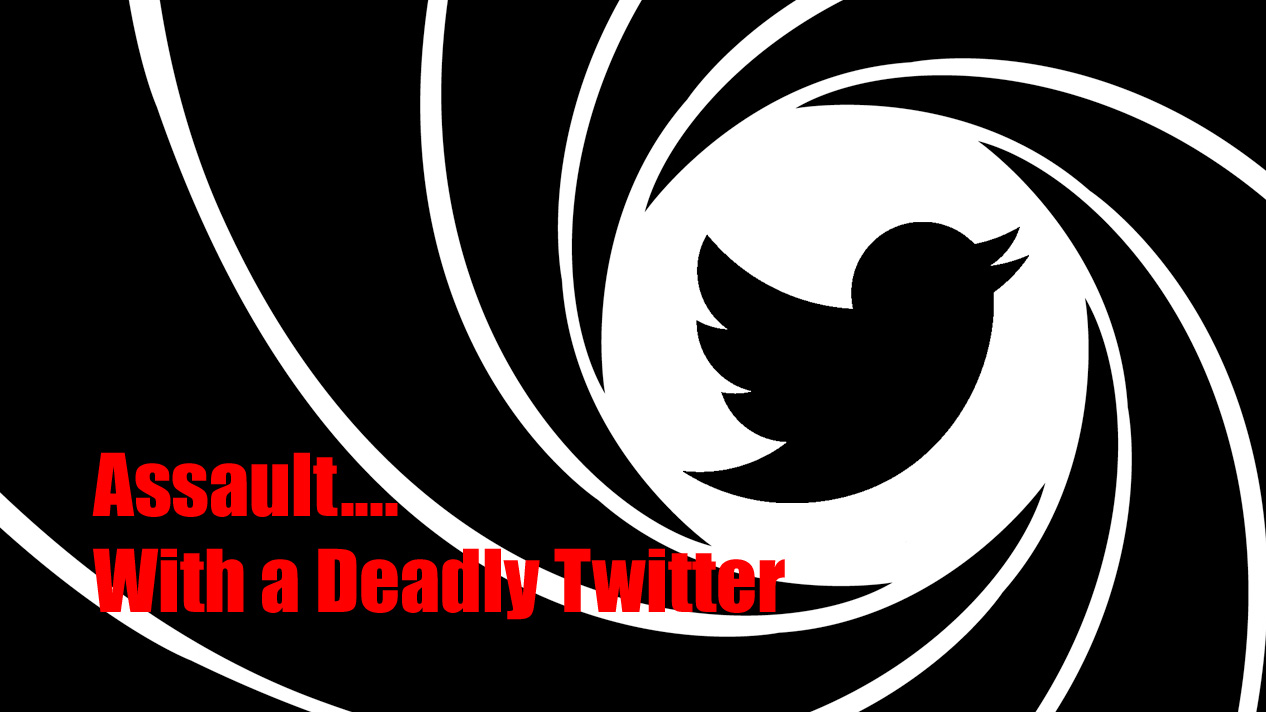 This is Part I of the ongoing coverage of Assault With A Deadly Twitter. Continuing entries:

In October of 2016, someone sent a Tweet to journalist Kurt Eichenwald (a known epileptic) that contained an animated gif of flashing images of the sort that often cause epileptics to have seizures. This was apparently done in retaliation to an article Eichenwald had written. Eichenwald wrote about the experience of receiving the Tweet in Newsweek:

I was carrying my iPad, looking at the still image on the video and, without thinking, touched the PLAY button.

The video was some sort of strobe light, with flashing circles and images of Pepe flying toward the screen. It’s what’s called epileptogenic—something that triggers seizures. Fortunately, since I was standing, I simply dropped my iPad to the ground the second I realized what Mike had done. It landed face down on the bathroom floor.

And apparently last night, December 15, 2016, someone again sent a Tweet with an flashing & strobing image, along with the message “you deserve a seizure.” In a now deleted Tweet, Eichenwald’s wife claimed: 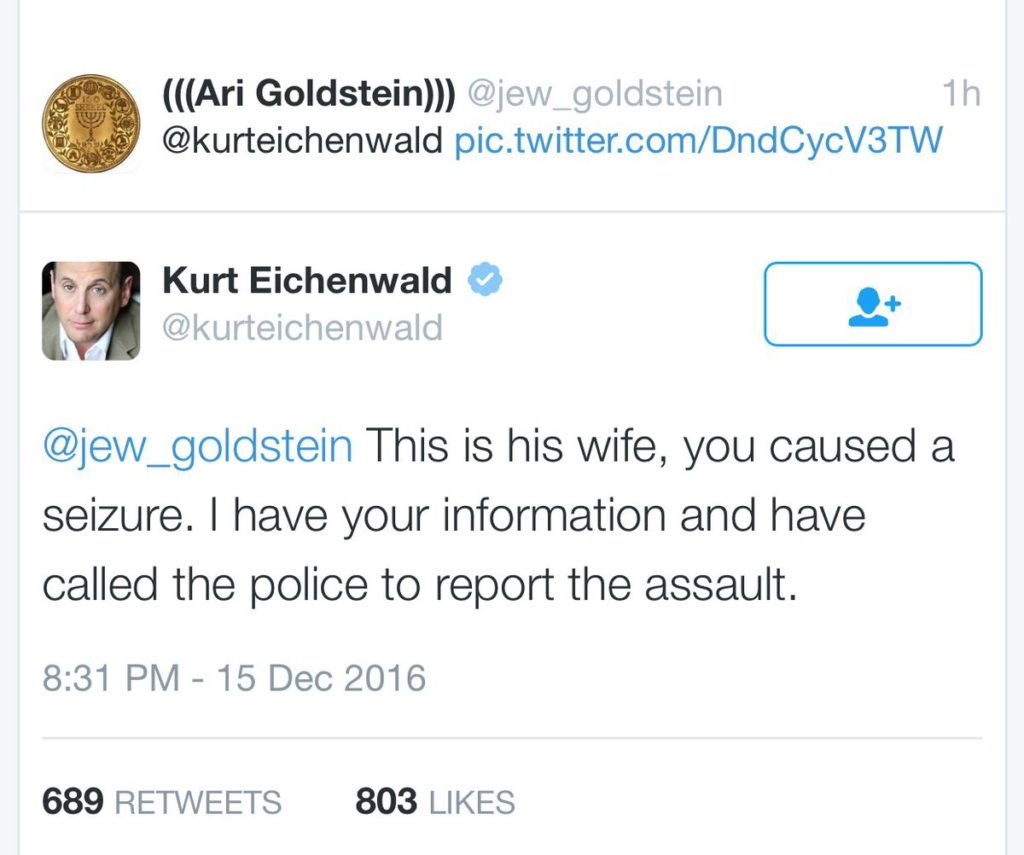 The following day Eichenwald posted a series of Tweets beginning here (click through to read the full string of messages):

For self-protection, I am taking a short twitter break. I will be spending that time with my lawyers & law enforcement going after 1 of u…

So that leaves us with the question:

Can You Sue Someone For A Tweet That Induces Epilepsy?

When this issue initially arose back in October of 2016, U.C. Davis law professor Elizabeth Joh discussed the issue at Slate,

Had this Twitter troll walked up to Eichenwald and pointed what appeared to be a loaded gun at the journalist, most would agree that the troll would be guilty of assault. Had the troll walked up to Eichenwald and surprised him with a tablet displaying the video, the result would likely be the same. After all, not all weapons are guns. It’s the same thing with the tweet—the distance does not change the analysis.

This may not be the clearest exposition, and makes some fairly obvious conflations, but the point is that the delivery mechanism, the distance, the means, does not change the elements of the offence.

Nor is this about Twitter, but applicable to any social medium, and more generally, any malicious use of the internet…

This isn’t rick-rolling. Whether the video could trigger a seizure isn’t the point either. Nor does it matter that Eichenwald didn’t actually suffer the seizure, though he may have suffered iPad damage in the process of avoiding any potential harm.  The point is that Twitter had the potential to be used as a delivery mechanism for harm.

Greenfield more accurately framed the question “Can You Sue Someone For A Tweet That Induces Epilepsy?” as:

Can the mechanics of an internet medium serve as means of committing assault?

sending a link to an epileptogenic video to a journalist, the sender committed an assault: “intentional creation of a reasonable apprehension of imminent bodily harm.” An assault by threat, as we’d say in Texas — a class C misdemeanor, fine-only stuff….

But this assault on the journalist is interesting for another reason. It’s not only a threat to commit imminent harm — indeed, it’s arguably not even a threat to commit harm — but an attempt to cause bodily injury. That’d be a class B misdemeanor in Texas, with a maximum 180-day jail sentence and $2,000 fine. It’d be a third-degree felony — up to 10 years in prison — if the assailant intended to cause serious bodily injury.

Which transforms sending a blinking gif to someone from “haha, this will be funny,” to “oh shit, the FBI is at my door.”

Before we get too far afield, let’s get some common ground.  Using Greenfield’s question, we need to understand:

Mechanics Of An Internet Medium

The word ‘mechanics,’ is commonly understood to mean:

As applicable to the Internet, this means:

The Internet is the global system of interconnected computer networks that use the Internet protocol suite (TCP/IP) to link devices worldwide. It is a network of networks that consists of private, public, academic, business, and government networks of local to global scope, linked by a broad array of electronic, wireless, and optical networking technologies.

In most states, an assault/battery is committed when one person:

Many states declare that a more serious or “aggravated” assault/battery occurs when a person:

Assaults may also be pursued via civil means. That is, someone who commits an assault may be sued by the victim as well as prosecuted by the state for their crimes. Simply put, an assault is an intentional attempt or threat to inflict injury that places another person in fear of imminent bodily harm.1http://criminal.findlaw.com/criminal-charges/assault-and-battery-overview.html

In the situation involving Eichenwald: were the mechanics of an internet medium (Twitter) able to act as a delivery system for an assault (an intentional attempt or threat to inflict injury that places another person in fear of imminent bodily harm)?

Given that the offending user (((Ari Goldstein))):

I’d say that it’s likely that Eichenwald has some merits to his claims.

Of course, it’s also arguable that Eichenwald assumed the risk of being exposed to epileptic inducing images and videos by using Twitter.

“Assumption of risk” is a commonly understood defense in torts, which bars or reduces a plaintiff’s right to recovery against a negligent tortfeasor if the defendant can demonstrate that the plaintiff voluntarily and knowingly assumed the risks at issue inherent to the dangerous activity in which he was participating at the time of his or her injury.2https://en.wikipedia.org/wiki/Assumption_of_risk 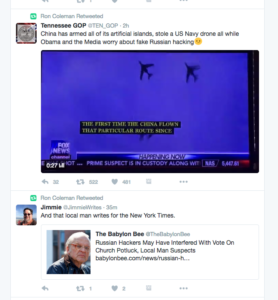 The Twitter service regularly shows pictures, autoplaying videos, and autoplaying animated GIFS in users newsfeed. It’s an inherent part of the service. Using Twitter is not an “inherently dangerous activity” by itself. But given that Eichenwald is an epileptic, it is possible to argue that is might be so in this narrow, specific instance:

This is further compounded by the fact that Twitter has an option to disable the auto-playing of media in its settings. Given that Eichenwald has been a user of the Service since 2010 and has composed nearly 50k Tweets, it is likely arguable that he should have known to use this option to prevent flashing images from showing up in his newsfeed.

That being said, assumption of risk only applies to tort law.

A final question is what, if any, liability Twitter has in this scenario.

“No provider or user of an interactive computer service shall be treated as the publisher or speaker of any information provided by another information content provider” (47 U.S.C. § 230). In other words, online intermediaries that host or republish speech are protected against a range of laws that might otherwise be used to hold them legally responsible for what others say and do.

The protected intermediaries include not only regular Internet Service Providers (ISPs), but also a range of “interactive computer service providers,” including basically any online service that publishes third-party content.

Twitter exercised no control over the offending Tweet other than acting as an interactive computer service provider. As such, it did nothing to elevate its control of the message to elevate its status to that of a publisher.

The only way such a ridiculous scenario could happen is if Reddit.

As that’s not the case here, Twitter doesn’t have anything to worry about.

Nothing New Under The…

All this is speculative of course. Delivery of assault across an internet medium is likely going to be viewed as somewhat of an issue of first impression before a court. As such, who knows what could happen. I think much will likely be bandied about by the distance involved but I don’t see that offering much defense. Just as someone can be held liable for a spring-gun despite being miles away, there is no reason to think that someone cannot be held liable for assault delivered electronically across great distances.

Regardless, the Eichenwald Scenario, if it is pursued, should offer law nerds ample fodder for discussion over the coming months.

Update: Here is a report on Sudden Unexplained Death in Epilepsy. Which is apparently a thing that happens that I was unaware of. Shout out to the AM Slack.