Assault By GIF (Assault with a Deadly Twitter Part VI) 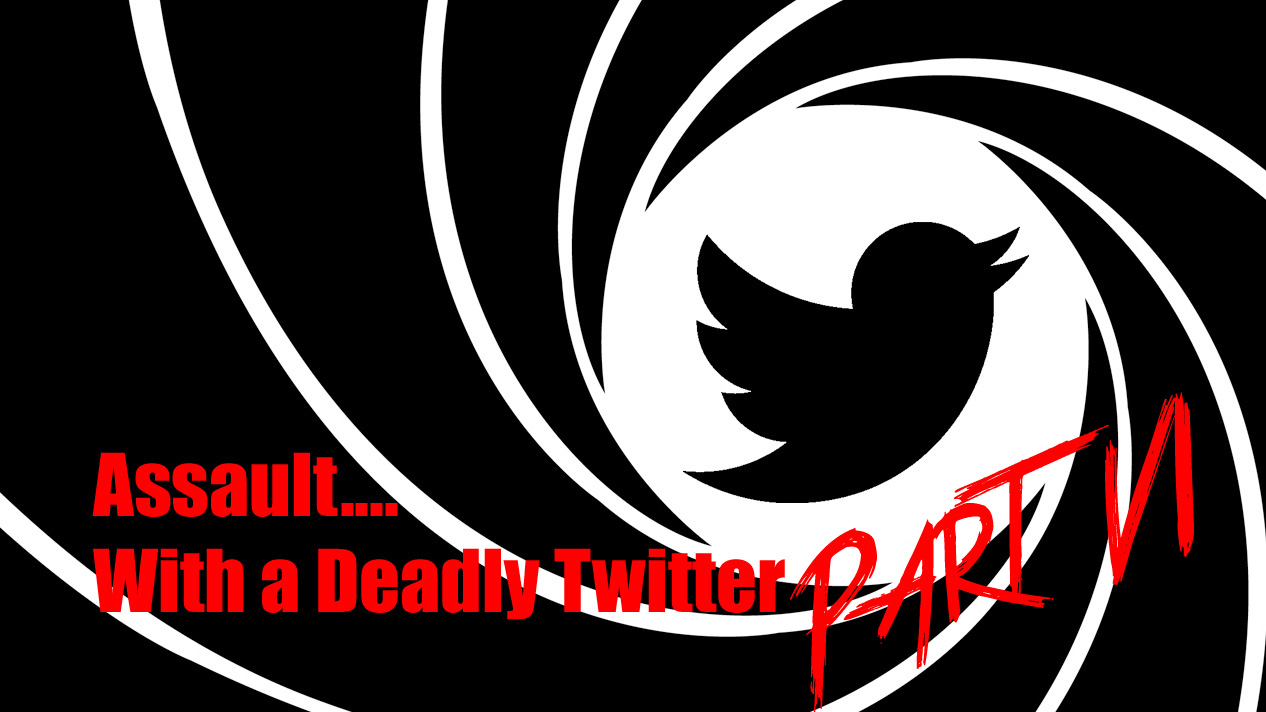 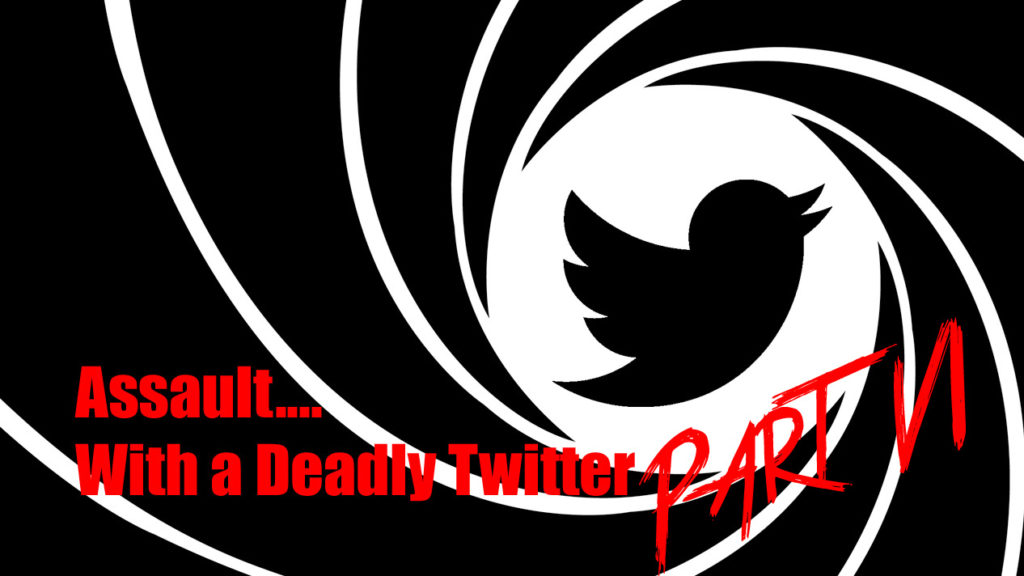 This is Part VI of the ongoing coverage of Assault With A Deadly Twitter. Previous entries:

In case you missed the explosion on social media yesterday, lots of information dropped regarding Assault With A Deadly Twitter.

The Texas court unsealed the complaint in the case, which you can read here.

Despite supporter’s claims that Rivello was discovered because he had made donations to an epilepsy foundation and emailed Eichenwald, we learned that he was discovered via old fashioned sleuthing (albeit of the digital variety).

Rivello bought a prepaid burner phone and SIM card. He setup an anonymous Twitter account. Theoretically, he was taking the right steps to remain hidden from discovery. But here’s what happened. 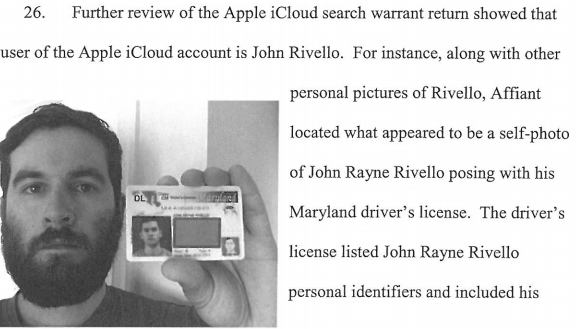 LIFEPROTIP: if you’re creating an anonymous account to harass people, don’t store a pic of you with your real ID in it too.

But let’s look at the charges.

(2) with the intent to kill, injure, harass, intimidate, or place under surveillance with intent to kill, injure, harass, or intimidate another person, uses the mail, any interactive computer service or electronic communication service or electronic communication system of interstate commerce, or any other facility of interstate or foreign commerce to engage in a course of conduct that—

(A) places that person in reasonable fear of the death of or serious bodily injury to a person described in clause (i), (ii), or (iii) of paragraph (1)(A); or

(B) causes, attempts to cause, or would be reasonably expected to cause substantial emotional distress to a person described in clause (i), (ii), or (iii) of paragraph (1)(A),

To help understand, let’s stick Eichenwald and Rivello into the above code section to see how it reads.

With the intent to kill, injure, harass, intimidate (see evidence in complaint)…used…Twitter…to engage in a “course of conduct” that-

(A) Placed Eichenwald in reasonable fear of death or “serious bodily injury;” or

(B) caused, attempted to cause, or would be reasonably expected to cause substantial emotional distress to Eichenwald.

This can lead to 10 years in prison if (b)(3) “if serious bodily injury to the victim results or if the offender uses a dangerous weapon during the offense.” Worth noting that in the complaint, the 5th Circuit’s Pattern Jury Instructions are referenced regarding a “dangerous weapon” – “any object capable of inflicting death or serious bodily injury.” (More on this below)

Going in reverse order, (B) is difficult. Emotional distress is a tough reach in any situation. But (A) has pretty solid footing.

The remaining questions are:

1) Was Eichenwald in “reasonable” fear of death or “serious bodily injury?”

Tricky. Eichenwald are his wife are the only witnesses. Their testimony will be essential. Will a judge and jury find them to be trustworthy witnesses? 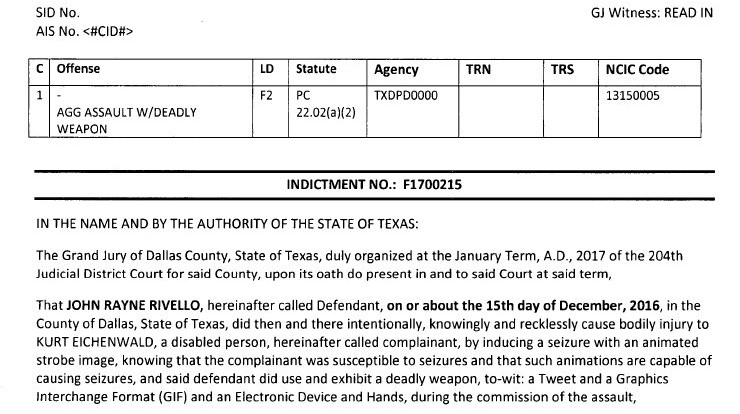 a Tweet and a Graphics Interchange Format (GIF) and an Electronic Device and Hands, during the commission of the assault

The Dallas DA is alleging that these things in conjunction, during the commission of the assault, constitute a deadly weapon.

What is a deadly weapon?

In Texas, there are two categories of “deadly weapons.”  The first category is the “by design” category. It encompasses weapons that are firearms “or anything manifestly designed, made, or adapted for the purpose of inflicting death or serious bodily injury.” Pen § 1.07(a)(17)(A). Serious bodily injury is defined as “bodily injury that creates a substantial risk of death or that causes death, serious permanent disfigurement, or protracted loss or impairment of the function of any bodily member or organ.” Pen § 1.07(a)(46).1O’Connor’s Texas Crimes & Consequences at 49 Not what we have here. Instead we’re looking at the second category.

The second category of deadly weapons is the “by manner of use”category. It encompasses “anything that in the manner of its use or intended use is capable of causing death or serious bodily injury.” Pen §1.07(a)(17)(B)2id.

So what has been found to be a deadly weapon in Texas?

All the people worry that if Rivello is found guilty of assault with a deadly weapon (Tweet and a Graphics Interchange Format (GIF) and an Electronic Device and Hands) need to understand that such a finding would only apply in this very narrow set of circumstances.

Just as you can still purchase underpants in Texas, you’ll still be able to Tweet GIFs at people as well. But in the context of the Eichenwald Scenario as described in Part III of this series, you might be found guilty of felony assault.

And for those who think this seems far fetched, remember:

“Personal indignity is the essence of an action for battery; and consequently the defendant is liable not only for contacts which do actual physical harm, but also for those which are offensive and insulting.” 5 FISHER v. CARROUSEL MOTOR HOTEL INC424 S.W.2d 627628 (Tex. 1967)

That’s from a case where a server snatched a plate out of the hands a black man at a country club, shouting that a “negro could not be served in this club.” There was a lengthy trial and subsequent appeals before the Supreme Court in the state held that  “The intentional snatching of an object from one’s hand is as clearly an offensive invasion of his person as would be an actual contact with the body.”6Thanks to California Lawyer Steve Hendricks for reminding me about this case

Huge thanks to Jason Wilson for letting me take a peak at O’Connor’s Texas Crimes & Consequences. It helped immensely with this post. If you a CDL in Texas, you should buy it.