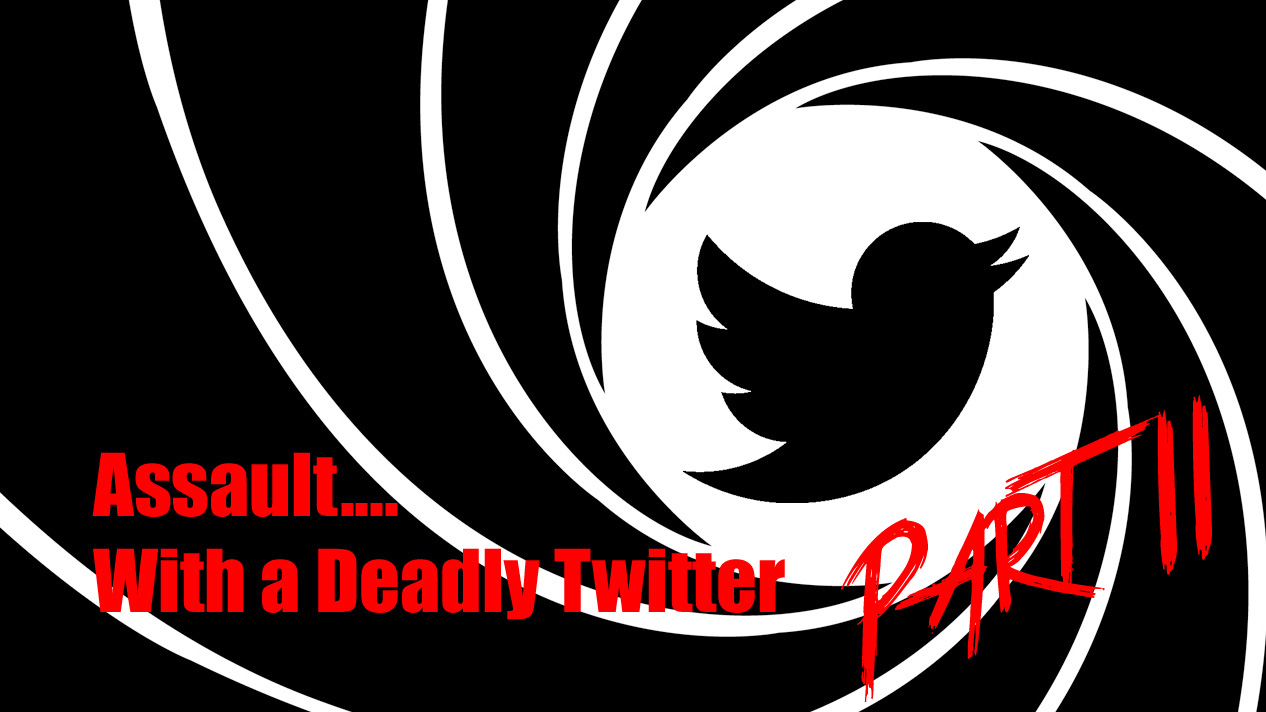 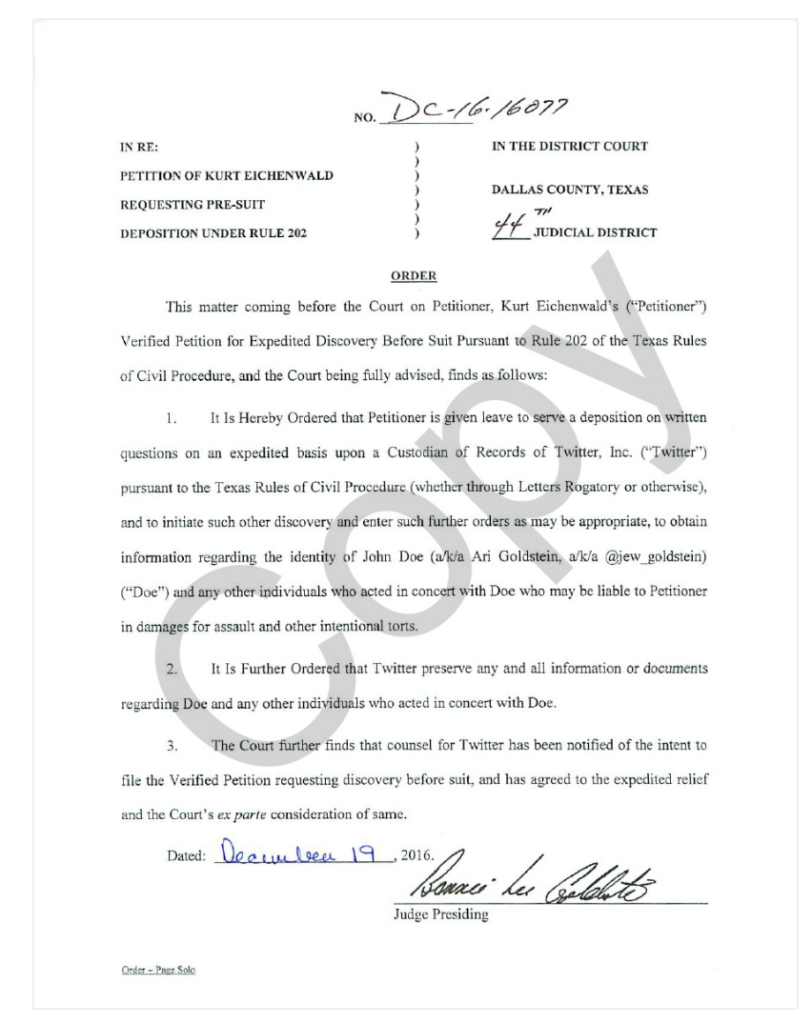 The most interesting thing to note above is “counsel for Twitter…has agreed to the expedited relief.” That means Twitter is not objecting to the petition, nor are they going to support “@jew_goldstein” on free speech grounds. So it looks like we’ll be seeing this matter in court sooner than later unless “@jew_goldstein” files an objection soon.

UPDATE (12/20/16, 1600): Daily Caller states that it received, from Eichenwald, a copy of a police complaint filed with the Dallas Police Department:

“On the evening of December 15, 2016, John Doe (a/k/a Ari Goldstein, a/k/a @jew_goldstein) (‘Doe’) tweeted to Eichenwald an image known to trigger seizures in people with epilepsy, e.g., a strobe image flashing at a rapid speed. Doe sent this image with the intent of causing a seizure, as evidenced by the words Doe typed onto the strobe, ‘You deserve a seizure for your posts.’ Doe succeeded in his effort to use Twitter as a means of injuring Eichenwald, causing Eichenwald to have a seizure which led to personal injury.”

Criminally speaking, things are now in the police’s court. They decide if they should investigate and a prosecutor makes the determination if charges should be pursued. (Note, this is different from the civil action, which is discussed below.)

Before you read this make sure you understand the background of the situation by reading this post, Can You Sue Someone For A Tweet That Induces Epilepsy?

So our question now is:

Before we can answer that question, we need to become familiar with a few concepts. Most importantly, what is Rule 202?

RULE 202. DEPOSITIONS BEFORE SUIT OR TO INVESTIGATE CLAIMS

202.1 Generally. A person may petition the court for an order authorizing the taking of a deposition on oral examination or written questions either:

(a) to perpetuate or obtain the person’s own testimony or that of any other person for use in an anticipated suit; or

(b) to investigate a potential claim or suit

Essentially, Eichenwald is filing a special type of claim against Twitter in order to obtain identifying information on the account (((Jew Goldstein)))(“JG”) that sent the offending Tweet.  Federal courts and other states typically give potential plaintiffs the opportunity to take depositions to preserve witness testimony when there is a credible risk that the testimony may be lost if it is not recorded immediately, but the Texas Rule is much more broad.  It specifically allows potential plaintiffs to “investigate” potential claims.1http://www.krcl.com/news/2014/05/07/litigation-update/litigation-alert-rule-202-pre-suit-depositions-in-texas/

In the Eichenwald Scenario, there is no way for Eichenwald to determine the identity of JG to file suit directly against him. JG’s personally identifying information is in the hands of Twitter. So it only follows that Eichenwald filed a Rule 202 Petition in order to determine JG’s identity in order to be able to serve him with a lawsuit.

A similar situation arose in New York two years ago:

It’s important to understand this so case so I’m going to lift a good summary I found courtesy of Steven Richard at Nixon Peabody. You can also read the opinion at Google Scholar here.

A man named Lemon Juice was accused of posting on Twitter a picture of an infant sexual assault victim, which was taken during her trial testimony against her assailant in a high profile criminal proceeding. The presiding judge had prohibited photography in the courtroom, yet someone surreptitiously snapped the photograph of the testifying victim and posted it on a Twitter account identified as [email protected] Lemon Juice, who had attended the criminal trial, was arrested. Ultimately, the contempt charges were dismissed when an investigation revealed that Lemon Juice had no connection with the Twitter account.

Lemon Juice wished to sue whoever tried to frame him. Before an action is commenced, “disclosure in aid of bringing an action” may be obtained through a court order under New York Code at § 3102(c). Lemon Juice filed a petition seeking a court order directing Twitter to disclose subscriber records, internet protocol records or similar information relating to the account. He also sought that Twitter be ordered to preserve the posted photograph and documents regarding the account creator’s identity. Twitter objected to providing any pre-suit disclosures in the absence of a court order.

The court determined that Lemon Juice has a viable claim for intentional infliction of emotional distress, characterizing the behavior associated with the Twitter account as “so extreme and outrageous that[] it went beyond all possible bounds of decency,” especially by giving the false public impression that Lemon Juice owned and operated the account on which the illegally taken photograph was posted. After Lemon Juice’s arrest, the account was updated to post a picture of him in its profile section.

The court evaluated whether it should deny the petition on First Amendment grounds, citing to precedent holding that free speech protections extend to activities on the internet including some anonymous speech. Free speech, however, is not absolute at all times and under all circumstances. The court concluded that Lemon Juice’s rights to protect himself and his reputation outweighed any First Amendment rights of the anonymous speaker, especially based upon the clearly tortious conduct behind the creation and updating of the Twitter account.

Weighing the above considerations, the evidentiary scale tipped against the anonymity of the account creator and in favor of Lemon Juice’s need to address the actionable wrongs against him. The court granted Lemon Juice’s petition ordering Twitter to make the pre-suit disclosures and preserve information as requested.2http://www.nixonpeabody.com/files/171148_Social_Media_17SEPT2014.pdf

So in the above matter, a plaintiff was able to get Twitter to divulge the identifying information of an anonymous user. The Eichenwald Scenario is not directly analogous to this, but it’s pretty close. But before you get too excited, we also need to consider a recent Texas case that limited TRCP 202.

But As Always, Jurisdiction First

The problem that Eichenwald is likely going to run into is one of jurisdiction. What does jurisdiction mean? It’s the power of a court to adjudicate cases and issue orders. One of the most fundamental questions of law is whether a given court has jurisdiction to preside over a given case. A jurisdictional question may be broken down into three components:

A Texas District Court allowed Rule 202 discovery to proceed against an anonymous blogger who was criticizing an Ohio software company which had office in Texas. It was appealed all the way to the Texas Supreme Court, where the anonymous blogger entered a special appearance as a “John Doe” party, contending that the petitioners had not shown that the Texas courts have personal jurisdiction over him. The Texas Supreme Court overturned the district court:

The majority held that the Trooper had legitimate justifications for his special appearance to contest personal jurisdiction. If he just sat back passively and allowed the pre-suit discovery to proceed, a Texas court without personal jurisdiction over him would compel the production of identifying information that would later be used against him in a forum where he is subject to suit. The majority held that the Trooper properly sought to protect his assertions of a First Amendment protection to remain anonymous. Otherwise, his claims of constitutional rights would be irreparably compromised by a court lacking personal jurisdiction and entering an order authorizing discovery as to his identity.4http://www.nixonpeabody.com/files/171148_Social_Media_17SEPT2014.pdf

I think it’s safe to assume that Twitter will object to jurisdiction in current matter based on advice of their legal counsel. Although given Twitter’s recent behavior (Trust & Safety Council anyone?), if not but for their lawyers, they’d likely just hand the information over.

If the Eichenwald Scenario was purely a matter of free speech, I think most courts would be inclined to allow him to remain anonymous under 1st amendment grounds.

But given the unique scenario (known epilepsy, strobing images, etc.) a reasonable person could determine that the speech (animated gif) actually rose to the level of assault in this very narrow scenario.

I’d say Eichenwald’s got a fair shot of having a court of appropriate jurisdiction issue an order to Twitter that compels it to provide identifying information on JG.

The immediate question remains, is a Texas District Court the appropriate court?6It’s worth noting that Texas has a very broad longarm statute.