This is Part VIII of the ongoing coverage of Assault With A Deadly Twitter. Previous entries:

Things have been quiet of late on this case as the wheels of justice grind ever so slowly. Hearing dates have been set, then pushed back, etc. Not much has been happening other than, “hurry up and wait.”

Then someone sent me a grand jury subpoena.

With my name on it.

The grand jury subpoena was at the request of the Department of Justice (DOJ). And the subpoena didn’t actually have my name on it but instead my Twitter account name (@associatesmind) on it. Along with fellow lawyer/law blogger Ken White (@popehat) and a few other anonymous users.

Note that the DOJ wants information on our accounts since creation. Not exactly time-limited in their request. Further, the information they request is…expansive. 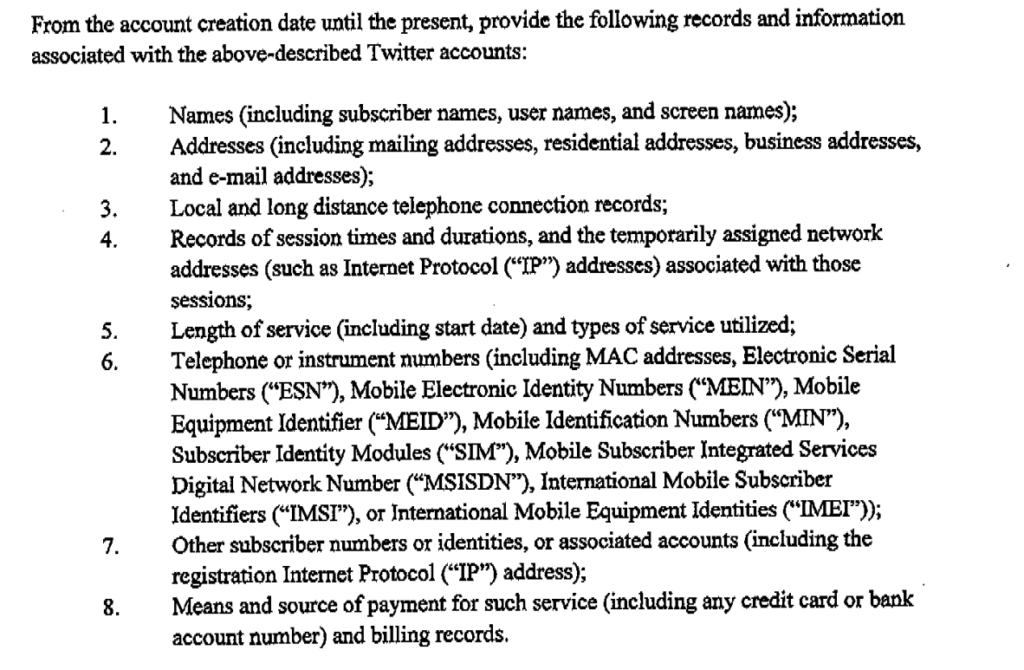 Why does the DOJ want this information on us? What does this have to do with Eichenwald v. Rivello? That’s a rather winding tale.

If you want the entire story, you should read this excellent write up from TechDirt which broke the story yesterday. But essentially the subpoena has nothing to do with Eichenwald v. Rivello. Rather in the context of a conversation on Twitter a few months ago talking about Eichenwald v. Rivello, a security researcher by the name of Justin Shafer showed up:

…about the time all of this was happening, Ken “Popehat” White had started another Twitter thread about the Rivello arrest, leading Virgil and Keith Lee to respond about the criminal complaint, eventually leading Mike Honcho to note “Nathan Hopp is the least busy FBI agent of all time.” It is to that tweet that Shafer replies with his smiley emoji and adds or cc’s, Dissent Doe to the conversation:

…and that’s it. Because Shafer Tweeted a smiley emoji at us, the DOJ wants identifying information on our accounts since creation. It’s a bit…overbroad.

You can read more here:

I’m unconcerned about any of this because I have no idea about who Shafer is or what this is all about other than he Tweeted an emoji at me. I’ve got nothing going on in the case.

I’m also not concerned about the DOJ “unmasking” the true identity of my Twitter account…because I’m myself. That’s sort of the whole point about having one of those verified blue checks on Twitter. And as we debated in LawyerSlack, I guess the DoJ doesn’t think a judge would take notice of Twitter verification under 201(b)(2).

But What About the Anonymous?

But the other three anonymous users likely care about their privacy. As TechDirt notes:

Twitter is apparently fighting back against this subpoena. And even though it was issued back in May, a few days ago, the company alerted the individuals that the DOJ was demanding info on. Dissent Doe has already stated publicly a plan to move to quash the subpoena as well, and I wouldn’t be surprised to see the others named take similar steps.

Doe is going to fight for his right to exercise his free speech rights while remaining anonymous. And as Greenfield notes at Simple Justice,

For Dissent Doe, this is a serious matter of principle, and that’s reason enough to go to war over this inanity. But if this scenario couldn’t get any more ridiculous, Ken writes of his initial urge to get on the phone and call up the AUSA.

Third, when I read the subpoena yesterday, I was suddenly gripped with exactly the sort of impulses that I urge clients to resist: the overpowering urge to do something and talk to someone to straighten it all out. I was tempted to email the AUSA and introduce myself, and to argue that it’s ridiculous that he subpoenaed my identity, and ask what the hell he wants. That, of course, would be extremely stupid, even though I’ve done nothing wrong — perhaps especially because I’ve done nothing wrong. Fortunately, just as I plead with clients to resist this urge to reach out to the government, I resisted it myself. But I must admit it is powerful.

Just to reduce this to basics, here’s the guy who is the target of a subpoena to twitter, whose identity is open and notorious, writing about the subpoena and the urge to deal with it, while twitter refuses to comply, will fight the subpoena, and the government will go to war for the purpose of learning Ken White’s identity.

The entire situation is ridiculous.

Further, it is well-established that anonymous speech on the Internet, like other types of anonymous speech, enjoys First Amendment protection. In re Anonymous Online Speakers, 661 F.3d 1168, 1173 (9th Cir. 2011)(“online speech stands on the same footing as other speech—there is `no basis for qualifying the level of First Amendment scrutiny that should be applied’ to online speech”) (quoting Reno v. Am. Civil Liberties Union, 521 U.S. 844, 870 (1997)). As the Ninth Circuit has explained, “the ability to speak anonymously on the Internet promotes the robust exchange of ideas and allows individuals to express themselves freely without `fear of economic or official retaliation . . . [or] concern about social ostracism.'” Id.(quoting McIntyre, 514 U.S. at 341-42).

First Amendment protection of anonymous speech “is not unlimited, however, and the degree of scrutiny varies depending on the circumstances and the type of speech at issue.” Id. Political speech is considered to be “core” speech and is afforded the highest level of First Amendment protection. McIntyre, 514 U.S. at 346. Online messages such as the ones at issue here are also entitled to some level of First Amendment protection, even if the hurdle for overcoming that protection is less stringent than it is for political speech. See In re Anonymous Online Speakers, 661 F.3d 1168 at 1177; see also Highfields Capital Mgmt., L.P. v. Doe, 385 F. Supp. 2d 969 (N.D. Cal. 2005) (finding that identity of individual who anonymously posted derogatory comments about a company on an online message board was protected from disclosure under the First Amendment); Art of Living Foundation v. Does 1-10, No. 10-cv-5022 LHK, 2011 WL 5444622, at *5 (N.D. Cal. Nov. 9, 2011) (finding the standard articulated in Highfields applied to anonymously posted online commentary criticizing the plaintiff’s organization).

Given that I can’t imagine any reason for wanting huge swaths of data from our accounts, because someone Tweeted an emoji at us, I’d say that the three anonymous Twitter users are in a pretty good spot while Twitter fights the subpoena.

More updates to come as this case and Eichenwald v. Rivello move forward.

Aside, I’d like to publicly state that I appreciate Twitter going to bat for us on this issue. Thanks to everyone in the legal department for fighting this.