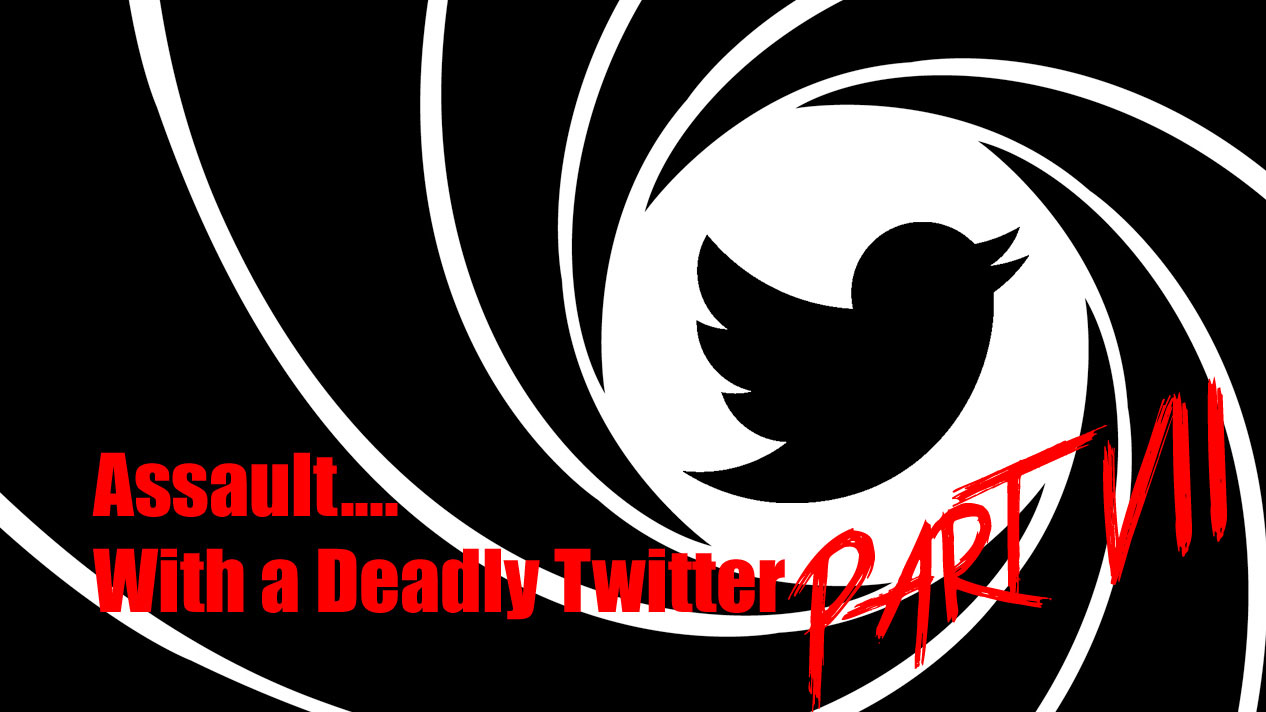 This is Part VII of the ongoing coverage of Assault With A Deadly Twitter. Previous entries:

Things have been relatively quiet since Rivello was arrested a few weeks ago. But in an announcement on Twitter, Eichenwald announced that he is filing a civil suit.

The civil action follows the arrest of John Rivello at his home in Maryland on March 17, 2017 on a warrant issued by the United States District Court for the Northern District of Texas. Based on publicly-available documents associated with the criminal proceedings against Mr. Rivello, we believe that other individuals conspired with Mr. Rivello in planning and executing the sending of the strobe light to Mr. Eichenwald. Through the civil discovery process, we intend to identify those individuals and to pursue claims against them as well. We are also considering additional civil actions against the more than 90 people who have sent flashing strobe lights to Mr. Eichenwald subsequent to the public disclosure that Mr. Rivello’s strobe attack had caused Mr. Eichenwald to have an epileptic seizure. (emphasis mine)

I discussed it a fair bit ago a few weeks on Twitter, but it’s worth pointing out again – there is a good chance that Eichenwald will attempt to sweep up as many people into this lawsuit as possible. If other people directly helped Rivello, there’s probably even a chance of a conspiracy claim.

LifeProTip: stop being a dick and sending flashing images to epileptics. If you disagree with someone, engage with them in argument, not by attempting to physically harm them.

So now with the filing of a civil suit we have:

The civil suit filed by Eichenwald seems like the shakiest leg of the charges against Rivello. The trick is: what are Eichenwald’s damages? For the first time we get an idea of what he’s alleging in his complaint. Starting at page 14 (complaint embedded below), we get a look at the damages Eichenwald is claiming. Essentially they are:

Damages in this situation are tough. Eichenwald has been saying that he’s been impaired for some time, but in the two months after the assault with a deadly tweet, he was:

Which casts some doubt on as to the severity of his impairment. But taking Eichenwald at his word, let’s examine the possible damages further.

I’ve never had a seizure before, but I imagine it’s not a pleasant experience. But generally speaking, they seem to be limited in duration. Eichenwald is also a lifelong epileptic and has had a successful career in spite of his condition. So the damages occurring from a single seizure are likely not that significant. A few days of missed work perhaps?

This is fixed cost that certainly lends itself to damages. So do appointments with doctors.  Maybe in the low thousands of dollars? But again, it’s not a significant amount.

I’m certainly not a doctor, but this seems speculative to me. Certainly something a defendant would fight against with their own expert witness. It’s also hard to quantify in terms of damages, especially as Eichenwald seemed to be going about his regular writing/appearance schedule in the months following the Twitter assault.

If Eichenwald was in a distressed state and was required to miss out on family celebrations, that’s certainly unfortunate, but not actually causing much in the way of damages. Unless it gives rise to…

Emotional distress is the “damage” suffered by a victim in a situation. Intentional Infliction of Emotional Distress (IIED) is the civil tort that one alleges when they have suffered from it.1Note Eichenwald listed three other torts: Assault, Battery, and Purposeful Infliction of Bodily Harm/Prima Facie Tort. These have been addressed, ad nauseum in previous entries so I’m focusing on the IIED claim here. In Texas, an IIED claim is composed of the following elements:

Emotional distress is something many people want to claim, but courts are incredibly reluctant to grant. Getting a successful IIED claim anywhere in the country is difficult. Every lawyer in Texas I spoke with about the case were universal in their response which largely amounted to:

Furthermore, let’s not forget element #6 – to prove an action for IIED, a plaintiff must establish that no alternative cause of action would provide a remedy for the severe emotional distress caused by the defendant’s conduct. “Intentional infliction of emotional distress is a “gap-filler” tort, judicially created for the limited purpose of allowing recovery in those rare instances in which a defendant intentionally inflicts severe emotional distress in a manner so unusual that the victim has no other recognized theory of redress.8Vaughn v. Drennon, 372 S.W.3d 726, 732 (Tex. App. 2012)

In Vaughn, the defendant damaged the plaintiff’s property, polluted it with exhaust, and threatened the plaintiff with a gun.9Id. Because these actions gave rise to other tort claims (nuisance and assault), the plaintiff could not recover for IIED against the defendant. There is no reason to suspect that a court would find otherwise with Eichenwald’s complaint.

It’s About Sending A Message

In a civil suit, Eichenwald has a chance of winning, but his recovery will likely be small. There just isn’t that much in the way of actual damages for him to recover. Not that I think Eichenwald is pursuing the claim for money, rather it’s the principal of the matter. It’s not going to have that much of a financial impact on Rivello.

But the criminal charges being pursued against Rivello are different. As discussed in Part VI, they have potential to be Rivello in prison for a long time.

More to come once the hearings start up later this summer.

Huge thanks again to Jason Wilson for letting me take a peak at O’Connor’s Texas Causes of Action. It helped immensely with this post. If you’re in Texas, you should buy it.