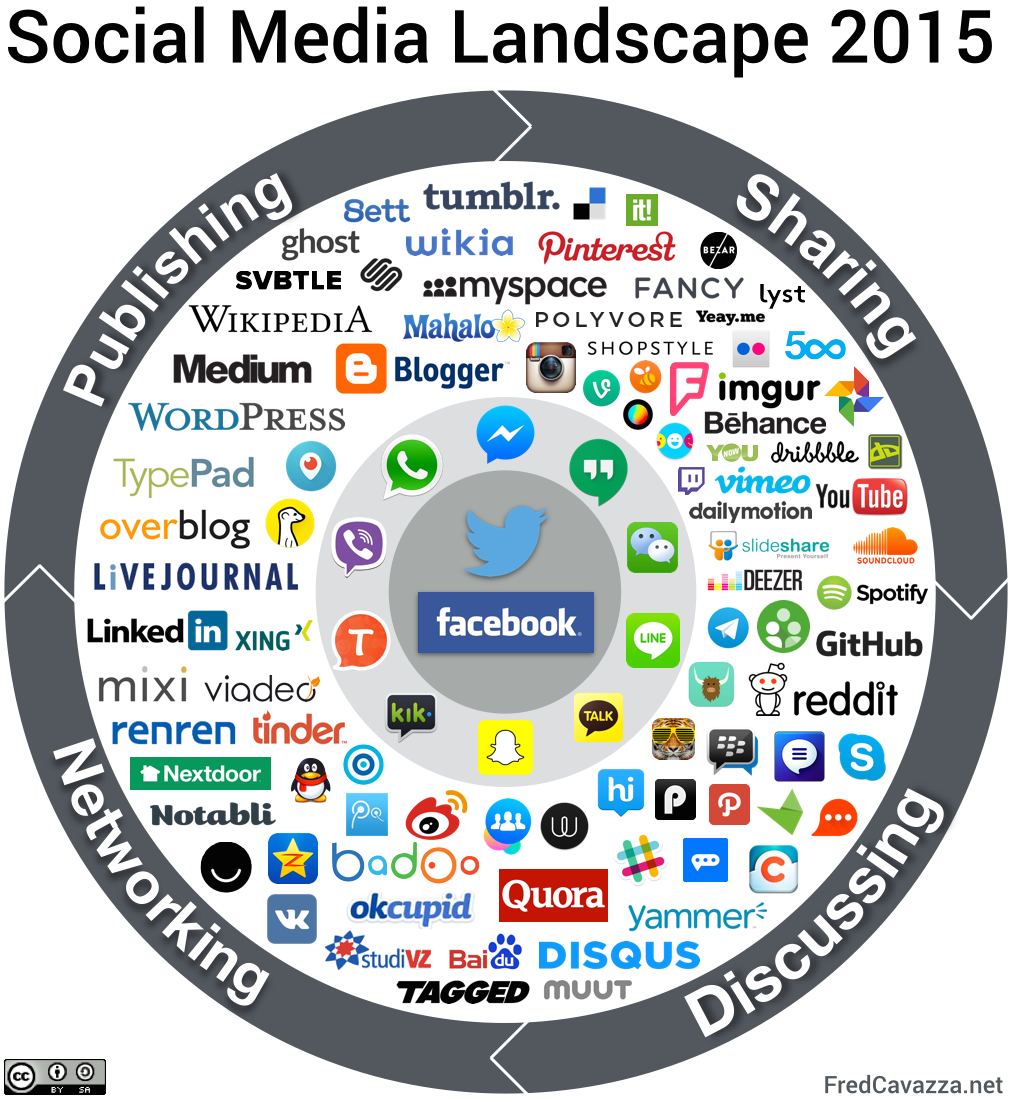 For many people, especially to those immersed in it, social media can seem ubiquitous. #Hashtags are everywhere and on everything. On TV, people have their Twitter handles on display below their name. Everyone knows that everyone else is on Facebook. The Internet, and social media, are here in a big way.

Recently, the 2015 Internet Trends Report from Kleiner Perkins partner Mary Meeker was released. TechCrunch calls it “the ultimate compilation of essential tech statistics.” Suffice to say, if you want to get a handle on where internet technology is going, it’s a must read. But it’s lengthy, and there is lots of superfluous information in there that we don’t need. Let’s break out the essentials. First off:

How big is the Internet? 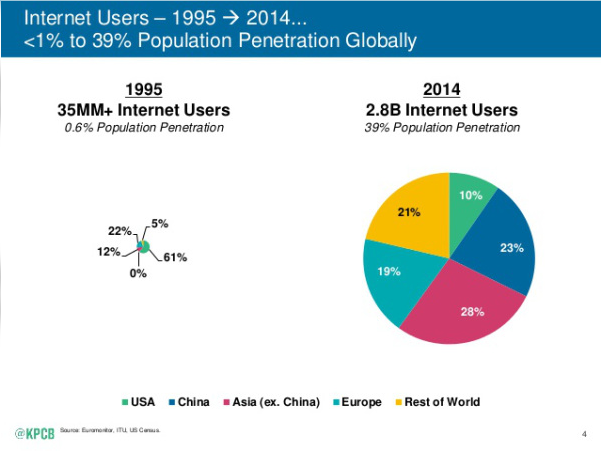 Roughly 40% of the population is on the internet in some manner. That’s alot of people.

How are they getting online? 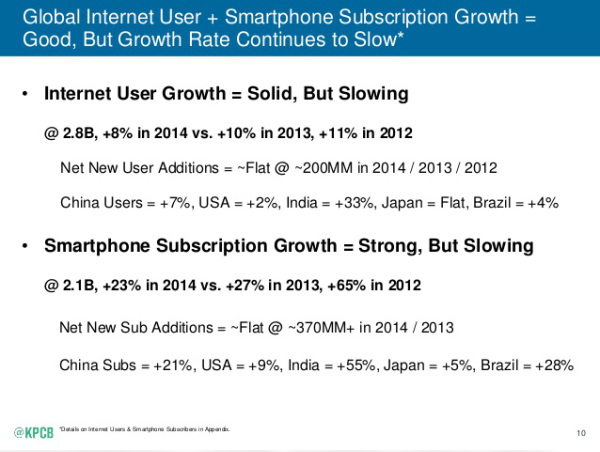 Notice the overlap there. There are 2.8B Internet users, & 2.1B Smartphone subscriptions. In a lot of emerging markets, Smartphones are becoming often the only means of accessing the Internet. But in other places, notably the United States, it means people are using multiple devices. 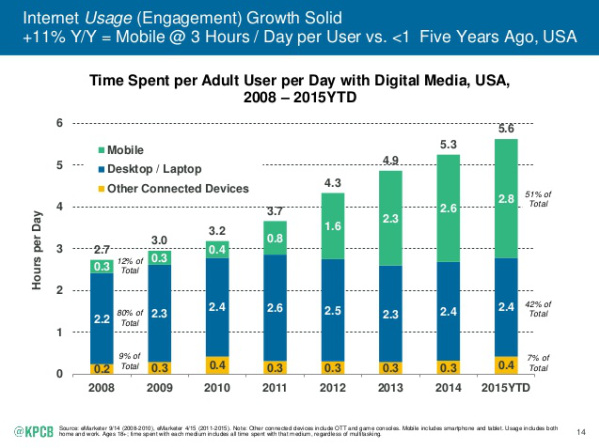 So that means of the 280 million Americans (first graph, 10% of 2.8B) using the Internet, they’re spending an average of 5.6 hours a day on average on the internet.

That’s a lot of time.

And 51% of that time is now spent on mobile devices. So no wonder Google rolled out a big update that punishes websites who aren’t mobile friendly. Technology companies are also increasingly mobile-focused Facebook, Twitter, Apple, Google, and Microsoft. Particularly in stand alone app development. Why? Look at this breakdown released by Flurry in 2013 of time spent on mobile devices: 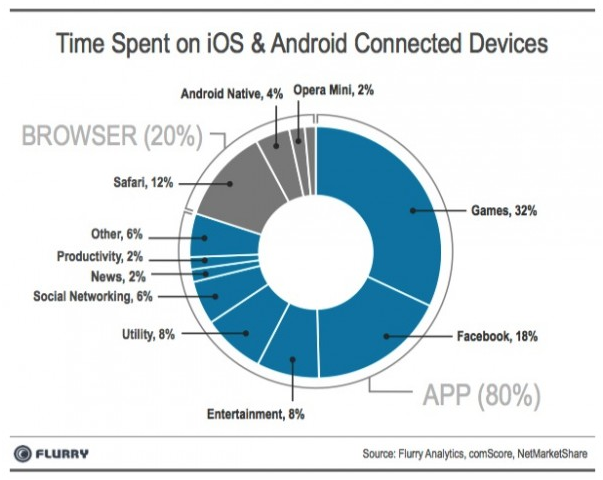 So the average American is on their phones about three hours a days. Of that time, 80% is likely devoted to app usage. Probably more than that as the above data is from 2013.  A bit more of a breakdown, this time back again to the 2015 Internet Trends Report: 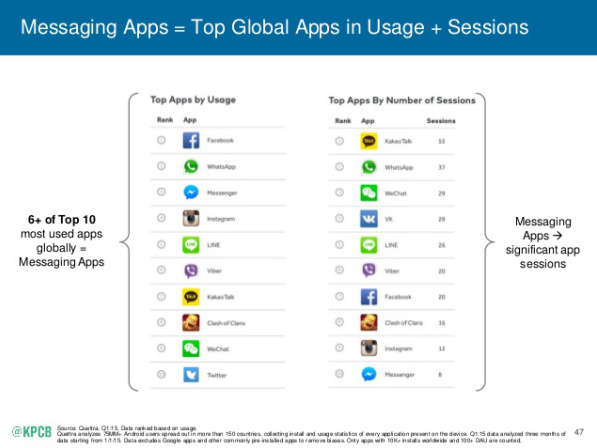 Communication is King. Also worth noting, Facebook owns the top four spots. Facebook owns Instagram, Messenger is their messaging app, and they bought WhatsApp in early 2014 for $19B.

Great, so why is this significant for lawyers?

If it isn’t apparent, this is where most Americans now get their information. Yellow Pages are in decline. People are tuning out from TV or using DVRs or streaming services such as Netflix and are no longer consuming advertisements. If you’re trying to reach a potential consumer or business client, odds are they are on the Internet in some fashion. As demonstrated above, they’re spending hours a day on the Internet. It’s where people go to get information at this point. Why?

Because people have come to trust and rely on the internet for almost all their information.

When was the last time you went to a library to research a problem? Use a physical dictionary? Encyclopedia? All gone. The Internet (for better or worse) is putting them all to bed.

When someone wants to learn about the official bird of Kyoto Prefecture (Streaked Shearwater), find movie times, or search for reviews and recommendations of appliances – they’ll Google it. Let’s break down those three examples a little bit:

Given all of the above, that means you should get right out there and start buying online advertisements right?

I actually looked at this a couple of years ago in a post, And The Most Trusted Type of Advertising/Promotion Is… I pulled some information from Forrester Research that should the following: 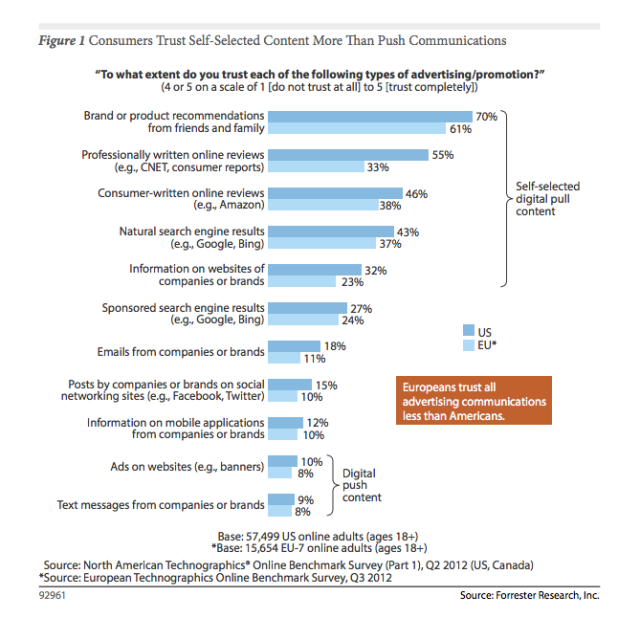 70% of people trust recommendations from people they know. Next people trust professional reviews, then consumer reviews. Natural search results com in at number four then trust starts to really slip off.

Here’s the thing, when people are purchasing something, they want to feel like they are making informed decisions.

Let’s have an example.

Let’s take Attorney Alice. Alice is a solo practitioner. She’s been using the same desk chair for about 5 years now and it has just about had it. So she decides to look into desk chairs and see what she should buy. Alice might be swayed by an advertisement, but I really doubt it. An advertisement does nothing to inform. It’s just sort of noise. Alice is a critical thinker and likes to make informed decisions. So she does a few things.

Alice wants a new desk chair, she asks her friends on Facebook for recommendations for chairs they use. A recommendation from a friend makes a person feel like they are getting reliable information from someone they can trust. She gets a few recommendations that way. But she want’s to do more research.

Alice goes on to look for some professional reviews. She stumbles upon The WireCutter, and finds their lengthy chair review page. It seems well researched and thorough. But their recommendation is $900. It’s just too rich for her blood.

Finally, Alice hops on over to Amazon and looks around at chairs.  Alice looks around before stumbling on the Alera Elusion Series Mesh Mid-Back Multifunction Chair: 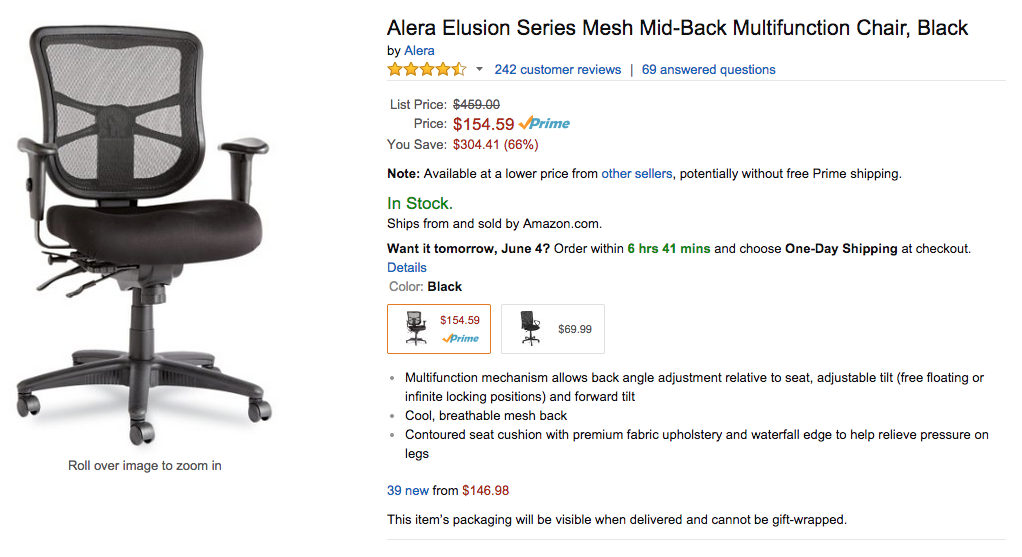 It’s in her price range, (she has Prime, woo!) and there are 242 consumer reviews, with an average of 4.5 stars. Trusting the “wisdom of the crowds,” she goes with the Alera as her purchase.

So if this is how consumers purchase goods online, it’s only natural to ask the following question:

Are consumers and businesses searching for professional services in the same way?

Checking You Out Online

For some people maybe they are looking for lawyers in the same sort of straight up away as above. They type in “wichita DUI attorney” and off they go looking for reviews. It’s the entire concept behind Avvo.com, the most popular lawyer review/recommendation site. Yelp, once solely about restaurants has long since morphed into a general rating/review app – lawyers are under the professional services category. There are all other sorts of “marketplace” apps and websites popping up as well. So some people will be going to those places to learn about potential lawyers they might hire.

Yet I don’t know if I would go so far as to call these “informed decisions” yet. It’s more difficult to verify these reviews. Also, on Avvo, lawyers can recommend one another, but that leads to the scenario of lawyers recommending other lawyers they don’t actually know.

Some potential clients (consumer or business) are also going to try and make an informed decision when it comes to professional services. Many are going to go through the same scenario Attorney Alice went through above. They’ll ask family, friends, and (perhaps) colleagues depending on the types of legal services needed. They might do that in person, but they also might do it on Facebook. But this personal recommendation is important because the nature of the decision at hand.

Choosing a lawyer is a significant decision for consumers or businesses.

Potential clients are not looking to spend $100, $300, or even $700 on legal services. Most legal services for consumers easily range into the $1000s of dollars. When it comes to business clients, that can easily shoot into millions of dollars.

For consumer clients, choosing a lawyer is likely one of the more significant choices they are going to make in their lives. A lawyer might be preparing their will, filing their divorce, or defending their 16-year-old daughter in a hit & run case. The consumer client needs to know they can trust the lawyer they hire.

So the decision to retain a lawyer is viewed through a bit of a different lense than just buying a chair. Choosing a lawyer is an expensive decision that can have long range effects. So even when these potential clients are given a recommendation from someone they trust, they are going to make the extra effort to learn about that lawyer. Perhaps they’ll stumble upon a review site, perhaps not.

But what they’ll likely do is Google something along the lines of “Keith Lee lawyer” in an effort to check you out. (Aside, if you want to read more about Googling yourself and SEO, I’d suggest seeing this old post of mine on the topic. And then this one.)

This is where we come to the point.

Potential Clients Want To Get A Sense Of Who You Are

What social media provides is a means of potential clients learning about lawyers they might want to hire. They get to read a lawyer’s blog and see how they present themselves on substantive legal issues. They get to see pictures of the lawyer with their family on Instagram. They see Tweets from the lawyer discussing the law, but also their favorite baseball team. By having a robust social media presence, a lawyer can help “fill out” how they appear online. They can make it easier for potential clients see that they are a real person – not some lawyer caricature.

This is the reason for lawyers to have a working knowledge of social media and how it functions. So that when the potential client can get at least a superficial impression of who a lawyer is – or at least how they present themselves online.

So far, all of this has been “The Why?” Why should lawyers pay attention to social media? Given everything laid out above, I think it’s safe to say that social media is now a permanent part of our culture and lawyers need to be part of it. But, I want to go back and highlight the first sentence of this post:

For many people, especially to those immersed in it, social media can seem ubiquitous.

Many lawyers are not immersed in social media. They have little to no understanding of what it is. The potential advantages it could bring to their practice, nor the pitfalls and ethical quandaries that can occur. But at some point, they begin to look into social media and are faced with this: 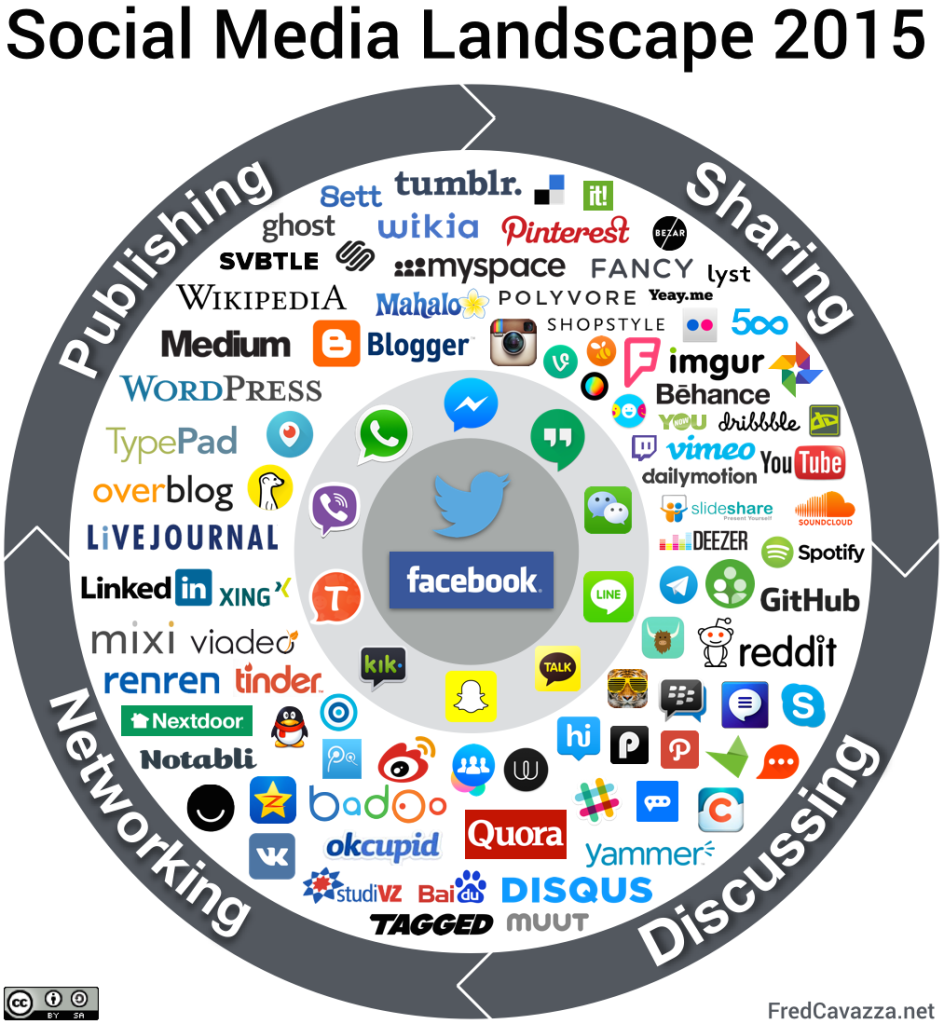 Then they throw their hands up in the air and give up trying to make heads or tails of it. Or they start throwing money at SEO and online advertising companies in the tune of hundreds to tens of thousands of dollars a month in hopes that it will do something – because lawyers feel like they want to be part of social media, but they don’t know how.