A Criticism of Cynicism

That’s the classical etymological origin of the word cynic. Today most people define cynicism as an attitude or state of mind characterized by a general distrust of others’ motives.1https://en.wikipedia.org/wiki/Cynicism_(contemporary).

And if you spend much time paying attention to current events, a cynical posture is pervasive. If you spend anytime on Twitter or other social media, it’s almost all-encompassing. Particularly when it comes to politics, law, and government.2And to be fair, could President Trump make it any easier?!

I’m as guilty of cynicism as anyone, probably more so. I mean, in my Twitter bio I self-describe as “snarky.” Which isn’t that surprising really. I’m a lawyer and lawyers are trained to be skeptics.

To that point, while research indicates most people tend to look on the bright side of things, lawyers don’t – Except in One Career, Our Brains Seem Built for Optimism

All in all, Dr. Seligman said, optimists tend to do better in life than their talents alone might suggest.

Surveying law students at the University of Virginia, he found that pessimists got better grades, were more likely to make law review and, upon graduation, received better job offers.

“In law,” he said, “pessimism is considered prudence.” 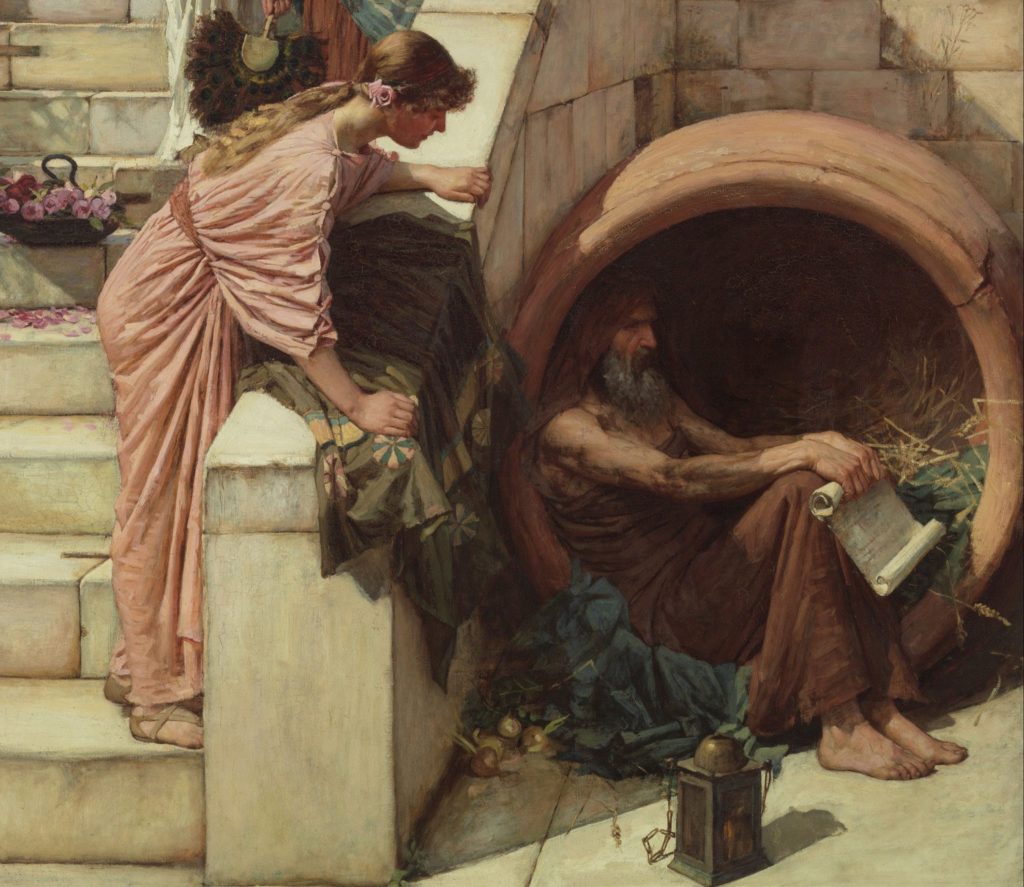 Diogenes was knee deep in a stream washing vegetables. Coming up to him, Plato said, “My good Diogenes, if you knew how to pay court to kings, you wouldn’t have to wash vegetables.”

“And,” replied Diogenes, “If you knew how to wash vegetables, you wouldn’t have to pay court to kings.”

As mentioned in the etymology box above, Diogenes is the most renowned Cynical philosopher. Diogenes and other cynics espoused not “general mistrust of others,” but questioning the authority and conventionality of traditions.

Classical Cynicism is not isolated distrust in others and ridicule of absurd ideas. Instead, “the key is to remember that any rebellion against convention is not to be done simply for the sake of rebellion, but rather for the amelioration of both one’s individual psyche and that of the larger community.”3https://scientiasalon.wordpress.com/2014/12/17/why-not-cynicism/

And I’m not sure if there is a more “just because” profession than law.

In many respects, the legal industry holds fast to tradition for good reason. It is built on precedent. As stated earlier, when approaching a case or deal, a healthy dose of skepticism is prudent. Lawyers need to avoid the Fallacy of Chesterton’s Fence.

In the matter of reforming things, as distinct from deforming them, there is one plain and simple principle; a principle which will probably be called a paradox. There exists in such a case a certain institution or law; let us say, for the sake of simplicity, a fence or gate erected across a road.

But sometimes, you do need to tear down a fence. Sometimes the Emperor has no clothes.

Lawyers, legal education, the legal industry as a whole – cannot remain stuck in the past. Progress is inevitable. But it needs to be prudent progress, balancing thoroughness while chasing efficiency.

Cynicism Can Lead To Stagnation

Two areas of the legal industry that have been on my mind recently are technology and education.5Actually they’re pretty much always on my mind, but that doesn’t have the same rhetorical flair. I’m speaking at legaltech and a legaled conference in the next two months and I’ve been thinking about how to discuss improvement in the legal industry in a method that is Cynical, not cynical.

As legal work is often dependent on high levels of thoroughness, the industry often resists attempts to move towards efficiency and innovation. And because lawyers are trained skeptics, they view any attempts at changing processes and procedures (especially if they’ve been working) with doubt.

If you look at the past 10 years of legaltech, you’ll find the corpses of dozens, if not hundreds of companies that have crashed and burned when they hit practicing lawyers.

It’s easy to be cynical when so many companies fail.

Law school is perhaps the most ivory of the ivory towers of universities. Ensconced in theory and  set methodologies of teaching. Law schools are currently viewed with distrust, if not outright revulsion by the “lost generation” of law school graduates from roughly 2007 to 2015.

It’s easy to be cynical when neither you or any of your friends don’t have a job.

But cynicism for it’s own sake is worthless. It’s wallowing in one’s own dirty bathwater. Again, it’s cynicism, not Cynicism. If you’re only being critical and not trying to push the ball forwards (or hold it in place if you think it’s being pushed in the wrong direction), then you’re full of sound and fury, signifying nothing.

It’s okay to be dissatisfied, but you also have to want to improve the status quo.

Claude Shannon, famed American scientist often refereed to as “the father of information theory,” once remarked on this type of dissatisfaction when giving a talk at Bell Labs on how to engage in creative thinking.

People with a sense of constructive dissatisfaction are also a key driving force in the changes happening in legaltech and legaled. These aren’t people who think things are bad, but that things could be done better.

Beyond that, they’ve evolved the conference into a general legaltech conference, becoming a general gathering of other people and companies who are dissatisfied with the technology most lawyers use in their practices. The speaker list reflects reflects people with a constructive dissatisfaction with the status quo of legaltech.

In October, I’ll be co-chairing the Educating Tomorrow’s Lawyers conference along with Alli Gerkman. In 2006 the people at IAALS were dissatisfied not with just one part of the legal system, but the system as a whole. They said “I think things could be improved a little.” Twelve years later they’ve made strides in a variety of issues:

This year, ETL17 is focusing on serving tomorrow’s clients. The ETL17 speakers reflect people at the forefront of legaled and from legaltech. Not to mention ignite presentations from innovative educators around the country.

It’s easy to be cynical and snarky.6mea culpa If you’re going to be an innovator, handling cynical attitudes and snark from the peanut gallery is part and parcel of the game. I saw Amy Wan talking about it in a Tweet about her startup Bootstrap Legal:

Developing a thick skin is a must. People are going to doubt and castigate you for trying to change.

But it’s your role to be a Cynic in the face of their cynicism.

Embrace constructive dissatisfaction and say “No, I think I can make things better,” regardless of what the haters say.

Take us out Tay: