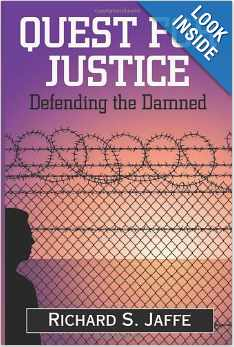 A couple weeks ago I was at my local bar association’s annual Bench & Bar conference and had the chance to meet Richard Jaffe, a highly-respected criminal defense lawyer here in Birmingham. We had both been invited to present our books at the conference and ended up sitting next to each other for quite a bit. Afterwards, we gave each other copies of our books. Before I get into my thoughts on Jaffe’s book I wanted to touch on something I was struck by while sitting next to Jaffe.

As people filed past us, person after person came up to Jaffe. He seemingly knew everyone. Lawyers, politicians, judges. People went out of their way to go and speak to Jaffe with warmth and familiarity. It’s obvious that over decades he has built lasting relationships, worked hard, and conducted himself with integrity to garner the level of respect I saw that day. Once I read his book, Quest For Justice: Defending The Damned, it became apparent how this came to be.

Quest For Justice is Jaffe’s history in the practice of law, and it is quite the career. Jaffe has been an attorney for nearly 40 years. He started off as district attorney in Tuscaloosa county for a few  years before transitioning to private practice as a criminal defense lawyer in Birmingham. The book chronicles case after case that Jaffe has been involved in over the years, as well as, encounters with colorful and larger-than-life characters of the Birmingham legal community. For instance, early in the book Jaffe recounts being in the infamous Judge Jack Montgomery’s courtroom, and demanding a preliminary hearing for his client – something Judge Montgomery reviled.

“Damn it!” [the judge] screamed. “You’re not getting a hearing. Do you understand me?”

“Judge, [Jaffe] began, standing my ground and hiding my fear, “we have to.” The words rolled off my lips slowly as my eyes met his enraged stare.

Suddenly, he drew a pistol. All bedlam broke loose as the the judge began to wave the gun in the air, pointing it just above my head.

Being threatened by a Judge with a gun, while on the bench, is something that lawyers don’t really face anymore.

And while the book is peppered with stories such as the above, the book is mostly a story of Jaffe’s clients – particularly those facing the death penalty. Quest For Justice provides an inside look behind the scenes of capital cases – from the trial court to decades on appeal. The twists and turns that such cases follow. The “sweetest words” in the English language – not guilty. Dark days of defeat. Jaffe does not sugar coat his experiences.

Yet, despite nearly 40 years as a criminal defense lawyer, Jaffe closes out with the following:

I still feel scared before every trial as I consider losing a case and possibly watching an innocent person sentenced to prison or even death. The thought that my best effort wasn’t good enough agonizes me for a great deal of time afterward. I feel a sense of inadequacy that I missed something in my case preparation, presentation, arguments or examinations, or perhaps the lack was somewhere deep inside me.

Which made me think of imposter syndrome, and another criminal defense lawyer’s thoughts on the subject. Despite decades of experience, those feeling never seem to go away.

All in all, Quest For Justice is the personal history of one criminal defense lawyer’s career and the cases that have defined him. If you’re interested in what it was like to practice criminal law in the Deep South for the past thirty years or just want an inside look at what it means to be a criminal defense lawyer, this book is for you. Recommended.