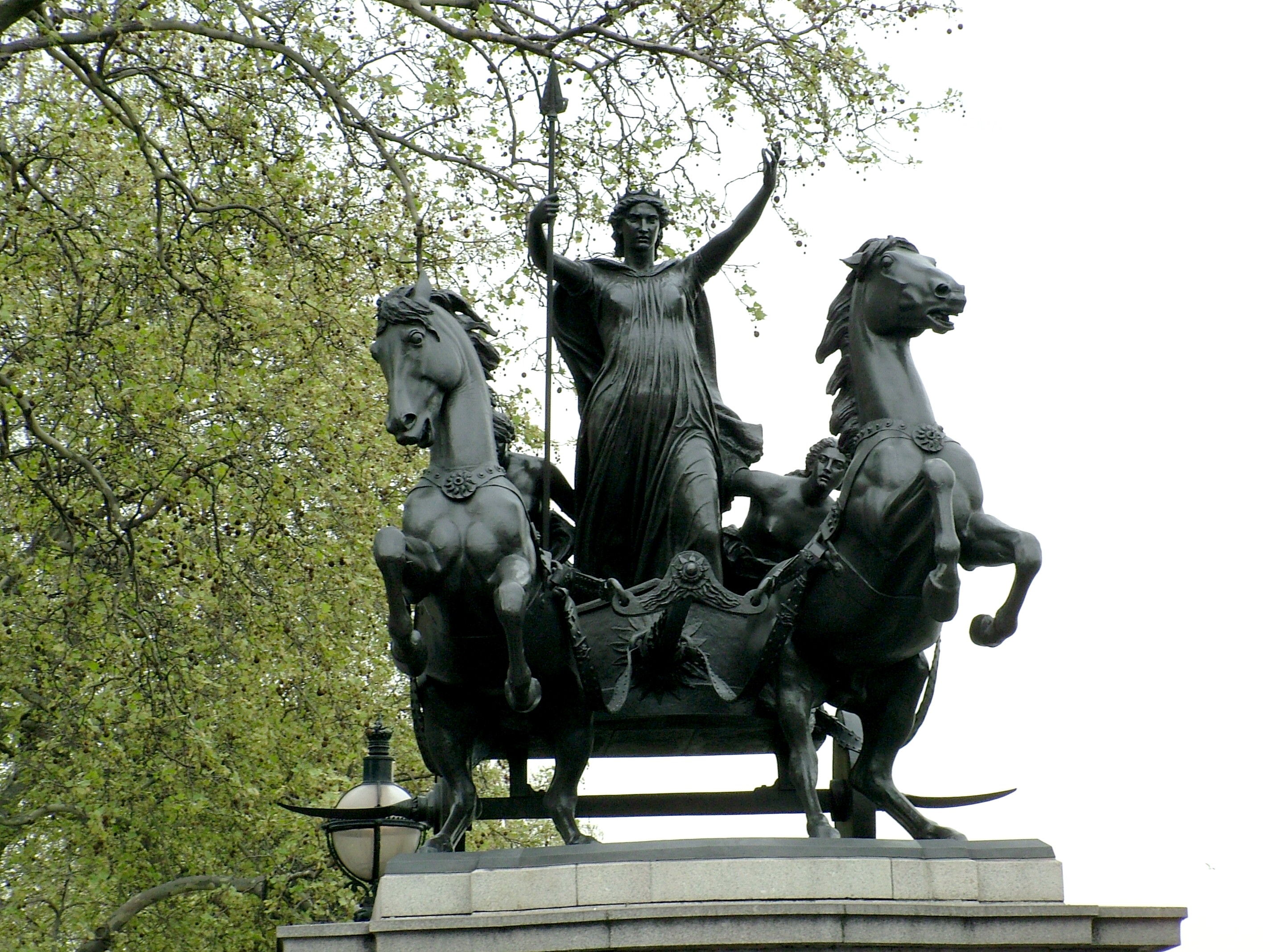 In cards, as well as in the long term challenges of life and acute moments of conflict, Fortune does not always deal us the preferred hand. As a consequence, everyone occupies a position of weakness from time to time, and everyone faces defeat. While it is fate, chance or Fortune who deals the cards, it is the unique capacity of the mind to alter the outcome based on manipulation of the context in which we play the game. In this post, I will explore three battles in which the seemingly weaker forces emerged victorious by manipulating the context of the moment. Specifically, they narrowed the playing field.

In Antiquity, when battle meant the intimate, face-to-face clash of tightly-packed formations of infantry, there was great danger in having one end of your formation out-extended by your enemy’s opposing wing. Therefore, we talk about a force being outflanked when the enemy succeeds in advancing around its end and gains access to its unprotected side or rear. A conventional way to protect oneself from a flanking maneuver is to situate ones vulnerable wing on a fixed (and hopefully impenetrable) obstacle such as a body of water, wall, or cliff. In so doing, the numerically inferior force manipulates the context of the fight by choosing the battlefield that minimizes its weakness. In these three examples, the smaller but smarter force gains the advantage based on this principle, force equalization.

Perhaps the most famous example of force equalization was recently depicted in the film 300. According to Herodotus (Book VII) and later historians and biographers, at Thermopylae, a few thousand Greeks including 300 Spartan citizens held at bay Xerxes’ hordes* by means of their heavy arms, motivation, grit, and, above all, battlefield selection. Ten years after Marathon and weeks before Salamis, Leonidas, the Spartan king and allied commander, faced the Second Persian Invasion over a cross-section of a narrow mountain pass. The path, only meters-wide, was bounded by a sheer mountain face on one side and a precipitous cliff on the other. This geography favored the Greeks: by limiting the surface area of their formation (and that of the Persians), man could face man without fear of encirclement (for the time being). Moreover, the Persians could only bring to bear a fraction of their force at any time, so their numbers were to no immediate advantage. With no ready access to alternate routes, the path was the Persians’ only place to fight. Whereas, on a plain, the Greek force would have been easily outflanked and overrun, here only the iron tip of the phalanx was exposed.  Unlike the jumble of free-style, one-on-one combat portrayed in the film, combat was tight-ranked. 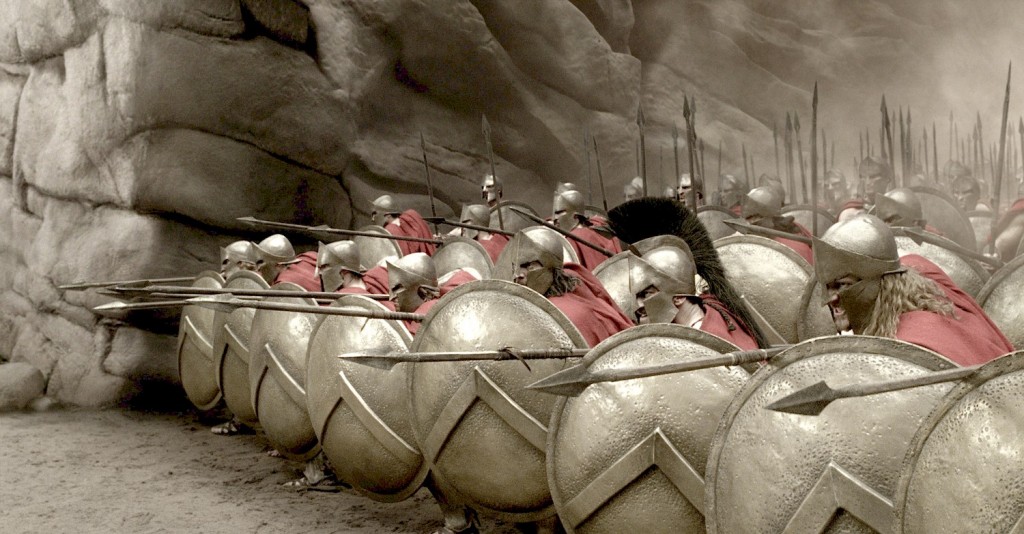 Tight formation of the phalanx, with shields overlapping. From 300.

Greeks stood across the pass shoulder to shoulder, with shields overlapping like scales and spear tips jutting out. Their iron-and-bronze-laden mass proved unmovable to the more lightly equipped Persians, and even waves of the elite Persian troops, the Immortals, were summarily repulsed. Those Persians that were not cut down were crushed under foot or pushed en masse into the sea below. Few Greeks were lost. In breaks between fighting, the Greeks heaped the Persian dead into walls of flesh, further hindering the way of Persian reinforcements. This action continued over days before, by treachery, the Persians gained access to an even narrower and higher pass leading to the Greek rear. Thus flanking the Greeks and on high ground, the Persians, on that third day of fighting, “won” a costly battle, killing the remaining Greeks, perhaps 4,000 that day. Herodotus says 20,000 Persians died.

What on the surface appears to be a defeat was quite the opposite, and not only from a public relations standpoint. At Thermopylae, the Greeks won a strategic victory, as the three-day delay (not to mention the morale blow) hurt the Persian cause. The delay allowed evacuation/retreat of much of the mainland outside of the isthmus of Corinth and the society to fight another day, specifically at the straits of Salamis. A strategic victory is not always a tactical one, nor is every victory complete.

*Estimates range from hundreds of thousands to more than a million.

A similar strategic decision on the part of the Roman general Suetonius Paulinus saved 10,000 legionaries in what proved to be the swan song of one of the great women of history. As good nationalistic Celts, the inhabitants of Briton, like their mainland cousins in previous generations, had grown tired of Roman intervention. The leader of their revolution, Queen Boudicca of the Iceni tribe, amassed ~100,000 lightly armed Britons and lead a final assault on the remainder of two Roman legions which had not succumbed in prior battles. The location of the battle is not definitely known, but Tacitus’ description of the site coincides well with a portion of the course of the ancient track, paved by the Romans which, in future times, would be known as Watling Street.

After evacuating London, which he determined he could not defend with so few troops, Suetonius needed to find a strategic position from which to fight. Outnumbered 10:1, the risk of envelopment was paramount, and so he sought a way to nullify his weakness.  Why should I paraphrase the details when we have Tacitus, one of the great historians of antiquity, telling the story?

Suetonius…chose a position approached by a narrow [gorge], closed in at the rear by a forest, having first ascertained that there was not a soldier of the enemy except in his front, where an open plain extended without any danger from ambuscades. His legions were in close array; around them, the light-armed troops, and the cavalry in dense array on the wings. On the other side, the army of [Boudicca], with its masses of infantry and cavalry, was confidently exulting…and so fierce in spirit that they actually brought with them, to witness the victory, their wives riding in waggons, which they had placed on the extreme border of the plain. 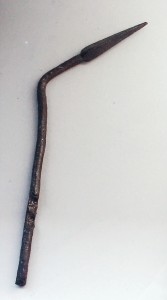 Suetonius had better trained, more professional, and heavier armed soldiers, so, with strategic positioning, he had gained the advantage despite the enemy’s numbers. Thus packed into the gorge which protected his flanks and rear and funnelled the enemy onto their swords, the Romans stood ready to receive the riotous attack of the Britons. As the charging enemy approached, the Romans hurled their pila, cutting down the first line of attackers and the momentum of the assault. The Romans then “rushed out in a wedge-like column” and broke through those who offered strong resistance. The others they put to flight toward the perimeter bound by the train of waggons. The waggons hindered their escape, and there the retreat piled up, allowing the pursuing Romans to fall on the backs of masses of Britons. Every man, woman, and pack animal within reach of a Roman sword was killed. Thus, the revolt was crushed, and the Romans solidified their occupation of the island.

In November, 333 BC, Darius III, the King of Persia, was the owner of a number of advantages, mostly associated with possessing the largest empire in the history of the world. But, as every pride-leader must respond to challenges from younger males, Darius had to face an audacious upstart from the barbarian hinterlands. It would be a small matter, once accomplished. Despite the fact that his adversary had won an early victory (against the governor of one of his border territories) and had traipsed (virtually unopposed) from Granicus through Sardis, Ephesus, Miletus, Halicarnassus, Gordium, and the Cilician Gates, there would be hell to pay at Issus. It was one thing to defeat governors and small-time commanders; it was another to face the King’s army. Moreover, the invader had made a critical error as he impetuously bounded ahead, and Darius took advantage by marching his whole army to his adversary’s rear, cutting off his only supply and communication route. So one can be sure Darius felt comfortable astride the escape route with a manpower advantage somewhere between 3:1 and 10:1. Darius was right to be confident, because he had made all the right moves. Unfortunately for him, the upstart barbarian was Alexander.

It did not escape the young man that he was at a great disadvantage. Alexander, to augment his boldness and impetuosity, was keen and discerning. Utilizing the strategy above, he chose the battlefield which negated his weakness and highlighted his strength. Somewhere on the narrow plain between modern Payas and Iskendrun, bounded on the east by hills and the west by the Mediterranean Sea, Alexander set up for the battle that won him the western half of the vast and rich Persian Empire. On the right wing of his army, first on foot, then at the head of his Companion Cavalry, Alexander routed the opposition forces, including Darius after a near-face-to-face encounter. He then turned to dispatch the flank of the Persians still engaged with his left. What can be said in a sentence took hours and the lives of tens of thousands of Persians. Moreover, Darius who fled when he saw Alexander bearing down, suffered humiliation which would outlast the age and find permanence in Pompeian mosaics not to mention the history books (for the above account and more, I beg you to read TA Dodge’s Alexander).

From Pompeii: Alexander (left) faces Darius at Issus. (D’s about to run.)

As I’ve said in earlier posts, it’s doubtful that you’ll be able to apply lessons from this article in a direct way. If you find yourself in a legal proceeding literally outflanking your opposition counsel or funnelling him onto your sword, something has gone terribly wrong. However, if you practice (or live) for any significant period of time, you will find yourself at a decided disadvantage. You will face defeat at the hands of someone on whom Fortune has smiled that day. But Fortune always smiles on the educated mind which can aid its own cause. When you face a situation in which you seem outgunned, try to narrow the scope of the argument, seeking ways to downplay your weaknesses and accent your strengths. With these ideas in mind, you may turn the tables on an unsuspecting foe.