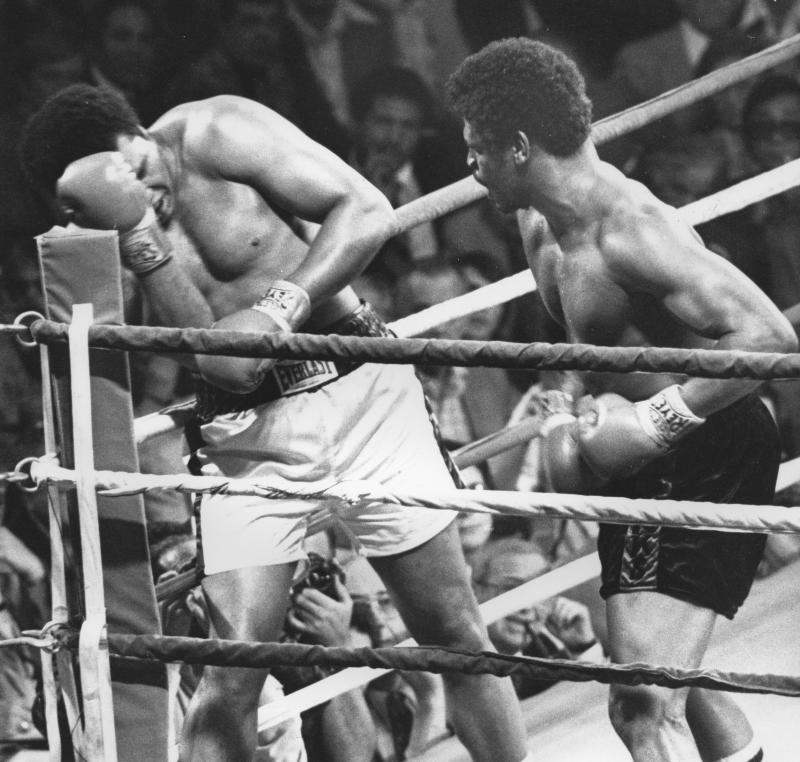 So Muhammad Ali, William the Conqueror, Philip II of Macedon, and Themistocles walk into a bar…

That joke was not going to end well, but it gets you where I want you. What do these dead old white men have in common with a modern sports icon? Strategy. Specifically, Rope-a-dope. Maybe I should say, “What do George Foreman, the English, the Theban-Athenian confederacy, and the Persian navy have in common?” They got suckered into believing that their adversary was actually “on the ropes” when, in fact, they were feigning retreat. In this post, we’ll watch this strategy change the outcome of a few old battles that, had they turned out differently, would have led to a completely different world.  Glad you speak English? Glad Western culture exists? Fan of democracy? Then I guess you’re glad those dead guys knew what you’re about to know.

It’s a short list of battles that determined the fate of all that we know. I can think of two candidates: Marathon and Salamis. Sure, there are lots of battles that changed the world, but none as world-forming (or world-preserving) as these. Their importance cannot be overstated. And if I had to make an argument for one over the other, I would choose Salamis. If the Athenians and Plataeans had lost on the fabled Attic plane, perhaps the Spartans, delayed by religious festivals, might have followed them up. I doubt the Persians would have fared better against the Spartan phalanx. But by the time the triremes tangled at Salamis, ten years later, a second Persian invasion had crushed everything in its path. The cream of Sparta had been annihilated in a suicidal stand at Thermopylae, and a tidal wave of Persian troops hundreds of thousands strong flooded Greece. Athens literally relocated to semiprotected islands off the Attic coast (Aegina, Troezen, and Salamis). Greece was lost, except for the Peloponnese which was protected by the Corinthian isthmus, but only temporarily. Unlike ten years earlier when a small Persian expeditionary force landed, lost, and left, Xerxes was executing a bludgeoning. His army, unprecedented in size, was reinforced and resupplied by the his navy of over a thousand ships. If the Persians attained sea-superiorty, no isthmus was going to prevent a sea-borne flanking maneuver on the Peloponnese. It is no exaggeration to say that the preservation of what would become the Greco-Roman world, this West of ours, was at stake.

Themistocles, the leading Athenian statesman, was the Odysseus of his day. He was wily and cunning, and could be so unscrupulously if it sought his ends. And his desire on this momentous occasion was this: to force the battle to occur there and then. There was in the Straights of Salamis; then was the next day. The urgency was due to the Peloponnesian leaders’ desire to evacuate the Straights (and Salamis) and fall back on their homeland. The Greek war council was in disarray, and Themistocles took advantage of the situation to press his cause. Themistocles leaked false intelligence via his trusted servant who brought news to the Persians that Themistocles wanted to defect to Xerxes’ side. Themistocles claimed that the Greeks were preparing to flee to the northwest and that, if the Persians acted immediately, they would catch the disorganized and demoralized force in its most vulnerable state–and would be able to destroy it.

It was a virtual feigned retreat, but it worked as well as a real one. The details of the ensuing tactics are not entirely clear, as there is disagreement between both ancient authors (Aeschylus, Herodotus, Plutarch, and Diodorus Siculus are main ones) and modern historians (such as A.R. Burn and Barry Strauss). The Persians moved to encircle the Greek position, perhaps by blocking both exit routes from the straights. A Greek vessel returning from a mission outside of the straights brought back information about the encirclement, and the Greeks, until then fractured, united for the preservation of their liberty. While the Persians, hugging the Attic shore, moved into the Straights, the Greeks, moored in the recesses of Salamis, prepared for a final battle. 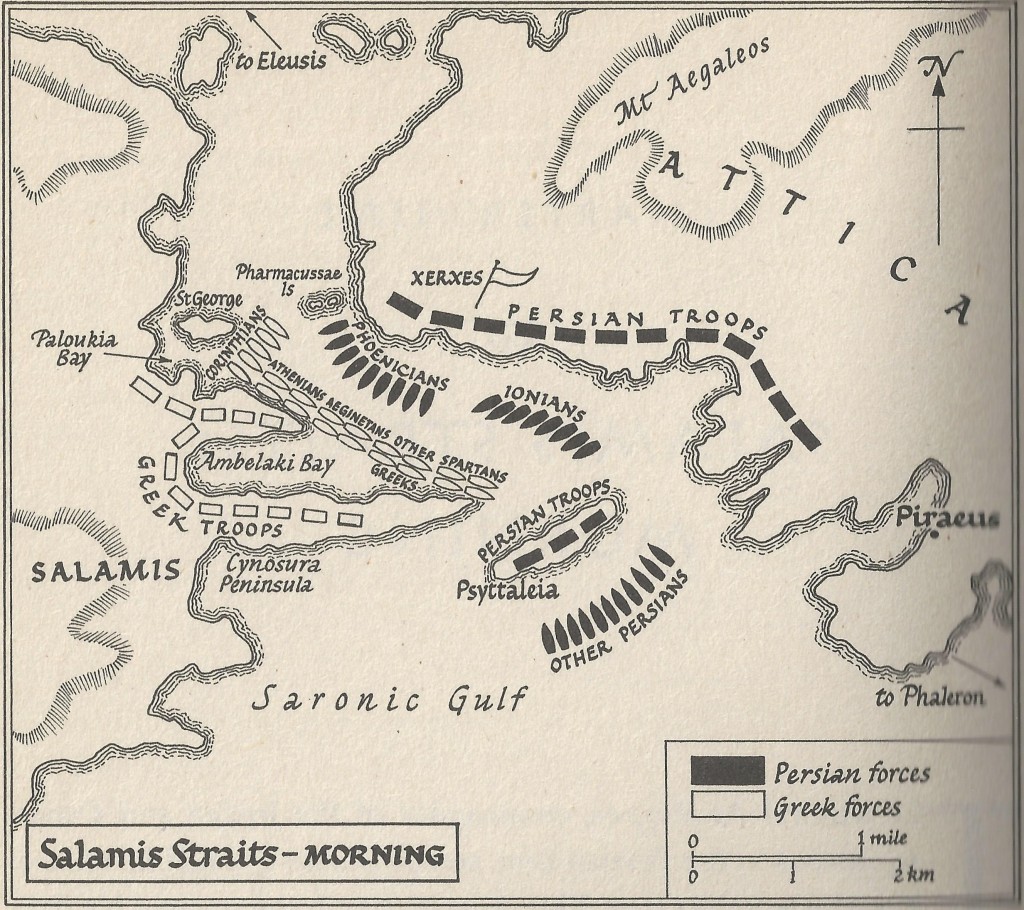 At daybreak, Themistocles’ stage was set. Seventy thousand Greeks from a score of independent city-states had boarded 378 triremes. Across the Straights lay a large portion of the 1,207 ships (according the Aeschylus, who fought in the battle) which the Persian confederates brought to bear. There is some debate regarding whether a second, physical feigned (or actual?) retreat was executed by 50 Corinthian ships at the northwest extent of the battle lines, as is depicted below. Despite historians’ disagreements on details, what followed was very bad for the Persians. 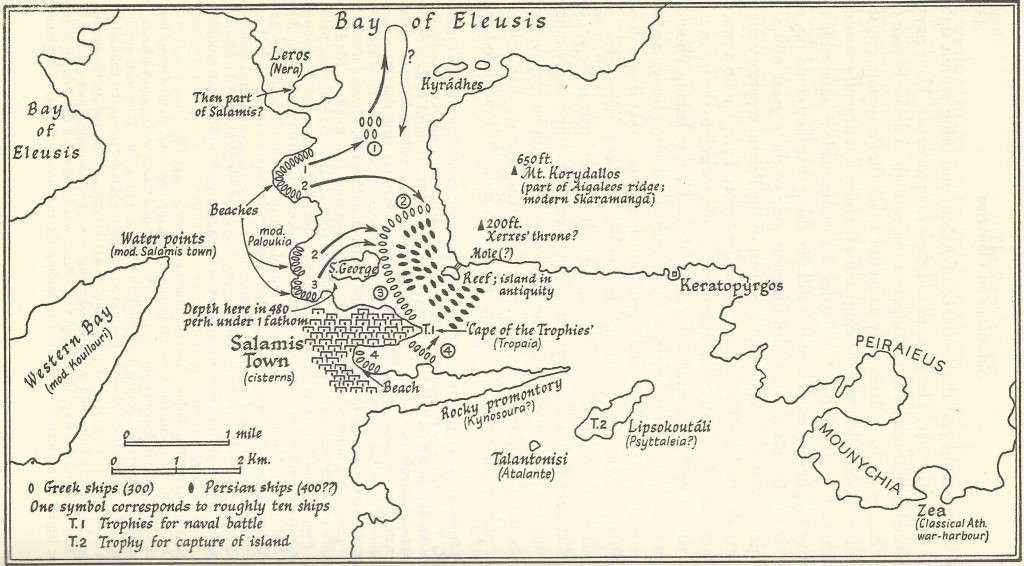 A song-like shout sounded triumphantly from the Greeks, and at the same time, the island’s rocks returned the high-pitched echo. All the barbarians felt fear because they had been deprived of what they expected. The Greeks were singing the stately paean at that time not for flight but because they were hastening into battle and were stout of heart. ~Aeschylus, Persians

The state-of-the-art Phoenician fleet, with its fast and agile ships, were too crowded in the bottleneck to escape the rams of the Greeks, led by 180 Athenian triremes. After a day of much slaughter, the Persian fleet routed in disarray. Aeginetan ships, lying in wait (probably behind the Cape of the Trophies, Cynosura or Psyttaleia) closed the net, preventing the Persians from falling back on their base at Phaleron.

And the sea could no longer be seen because it was full of shipwrecks and of the slaughter of men. ~Aeschylus, Persians

With the disintegration of the Persian navy, reinforcement and provisioning of land forces was impossible. The next year, near Plataea, a reinvigorated allied Greek land force of 100,000 annihilated the remaining Persian army, killing 257,000 of the 300,000 at the battle (if Herodotus’ numbers are accepted). The allied Greek navy followed up their victory at Mycale, completing the destruction of the Persian Mediterranean forces and paving the way for the Golden Age of Athens.

In 338 BC, Greek power was waning. Its institutions, art, and literature lived, but its manpower and military might had faltered. The Peloponnesian War and the Spartan and Theban Hegemonies had taken their toll. A new power was emerging in the rustic north, in Macedonia, where King Philip II was developing a fantastically agile and impeccably trained breed of shock troops, with a new, long range weapon, an 18 foot spear, the sarissa. More deadly than the spear was the discipline of his professional army which was exhaustively drilled and could execute maneuvers which clumsier shock formations would never dream of. 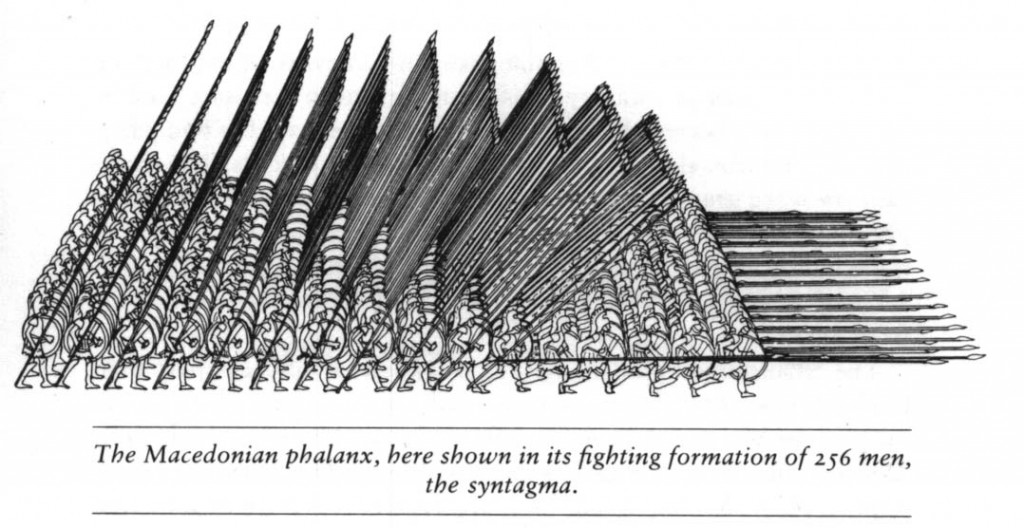 Not to belabor the political points, it is sufficient to say that the Greeks were tired of Philip’s increasing influence (indeed domination) of much of the Greek mainland, and they resolved to put an end to his bullying at Chaeronea. The old phalanx still used by Philip’s adversaries had been updated in the last half-century, but its lack of mobility and reliance on relentless plowing-ahead continued to make it vulnerable. If a breach formed in the normally-solid line of shields, any penetrating forces would wreak havoc in the formation. Also, allied confederate forces still used cavalry mostly as skirmishers, for harassment of supply lines, and for transport of men and materiel to the field. 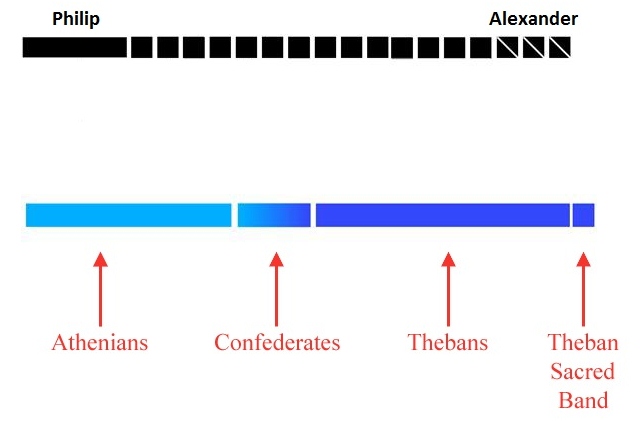 There were two keys to Philip’s success: the skill of his phalanx and the utilization of cavalry as front-line shock forces. Philip’s plan was to utilize his mobility and exploit the undisciplined Athenians to create a gap in the enemy line into which he would send his cavalry. Philip led the infantry at the Macedonian right; his son, an 18-year-old named Alexander, led the horse, his Companion Cavalry, at the left. Across the field from Philip stood the Athenian phalanx. Across from Alexander were the Thebans, including their Sacred Band, an elite infantry force which had never been defeated.

The opening move was Philip’s; he advanced with his right wing toward the Athenians while his left wing, anchored by Alexander, stayed put (that is, he assumed a left-flank refused formation). At his approach, the impetuous Athenians sought engagement.

In an incredible maneuver, Philip turned his troops 180° and led them in “retreat.” As the Athenians pursued their intended prey without regard for the integrity of their formation, the disciplined Thebans stayed in line. Consequently, a gap opened up, and Alexander, in a first recorded demonstration of his opportunism, drove his cavalry into it. Meanwhile, Philip’s phalanx abruptly turned to face the Athenians and counterattacked. 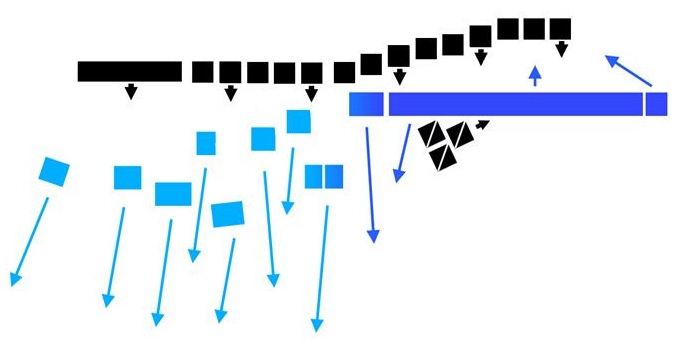 Seeing their predicament, the Athenians began to crumble and then routed, and the Thebans, unrewarded for their discipline, were outflanked by Alexander’s horse. A Theban gutting insued, in which the members of the legendary Sacred Band were slaughtered.

With no viable army remaining, all of Greece outside of the Peloponnese was Philip’s. Soon, Philip would be dead, and Alexander would begin is campaign to conquer all the nations of the earth.

Whether the decisive moment in the autumn of 1066 was a feigned retreat or a less glamorous simulation of one (that is, an actual retreat) is unclear. It’s hard to see the truth, peering through the fog of war and centuries of propaganda, misunderstanding, and iconoclasm. But what Duke William II of Normandy, soon to be dubbed the Conqueror, achieved through or in spite of this maneuver is remarkable.  As I write this, (accounting for the transition from Julian to Gregorian calendars)  it has been 946 years and 4 months since the last successful invasion of that blessed plot. What William accomplished has not been repeated by Armada or Blitzkrieg, and it created a cultural fusion which leads directly to you and me.

You know it sucked for King Harold Godwinson of England to realize that he had to fight two different (and independent) Viking armies, attacking from two different directions, both in 1066, to preserve his throne. The first invasion, led by King Harald III of Norway, he defeated at Stamford Bridge. Thereafter, he turned to face the norsemen of Normandy, and he met them at Hastings.

To piece together an exact idea of the proceedings, given the early accounts, is difficult; but application of the above battles should produce same clarity. Harold formed his infantry into a shield-wall along an opportune defensive position atop a hill. Forced to charge uphill into awaiting spears, swords, and axes, William’s cavalry failed, and failed again. Whether in retreat or feigned retreat (it’s debated and will never be resolved), the Norman cavalry fell back, and the engaging wing of the Harold’s army followed, breaking the unity of the line. In counterattack, William’s forces first struck their disorganized pursuers and then turned on the weakened flank of the shield-wall.

As with the last post, perhaps familiarity with these stories will only help you out-B.S. someone at a cocktail party. If so, they have achieved one goal. But, more importantly, how can you use these tactics in your professional life? How can you maneuver to place your opponent in a precarious position and, in turn, take advantage of their weakness? 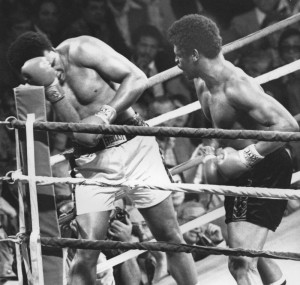 Much thanks, as always, to my references, ancient, modern, and in between.