How To Stop Splintering Your Attention (Deep Work + Eisenhower Matrix) 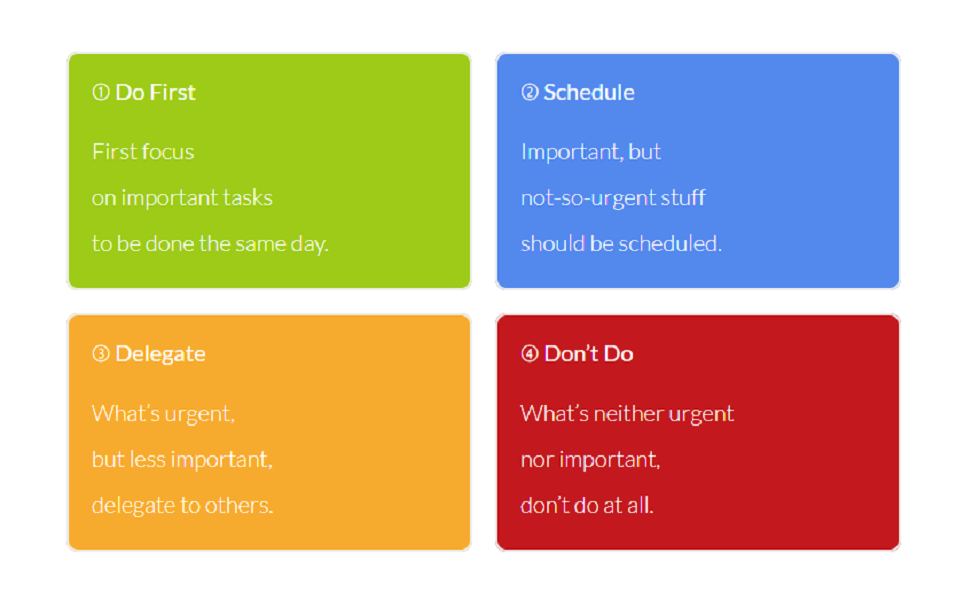 Now this, I think, represents a dilemma of modern man. – President Eisenhower 1The American Presidency Project, Speech delivered by: Dwight D. Eisenhower, Speech number: 204, Title: Address at the Second Assembly of the World Council of Churches, Location: Evanston, Illinois, Date: August 19, 1954, Website description: The American Presidency Project was established in 1999 as a collaboration between John T. Woolley and Gerhard Peters at the University of California, Santa Barbara. Archives contain 104,855 documents related to the study of the Presidency. (Accessed presidency.ucsb.edu on May 8, 2014) link

The world is trying to splinter your attention. Break it apart in a thousand different directions. Attempting to pull and push you in bite-sized chunks that distract you from your purpose.

Squeeze a text in between paying attention at the meeting. Check Twitter while you’re playing with your kids. Reply to that partner’s email while your husband went to the bathroom at dinner.

Computers, smartphones, and the Internet have infected the modern person with a sense of perpetual urgency. Little red dots on your phone with a number on them, a ding from your computer speakers, push notifications on your lockscreen. And interwoven through all of it is FOMO – the fear of missing out.

Companies that prey on your attention have conditioned you to think that they’re important and urgent – when likely they are neither.

When I sit down at my computer in the morning, I know there are going to be a list of items calling for my attention. Unanswered emails, dozens of notifications on Twitter, a thousand messages in LawyerSmack. And that’s not even looking at the list of actual work that I need to accomplish.

The allure of all these different activities is strong, they’re designed to play on FOMO and drive you to sink further into feedback loops. And this infection can spread across your mind to work as well.

If you’re not careful you’ll find yourself in a constant state of reaction. Waiting for some ding, blip, or message telling you what to do. You’re a trained monkey pushing a button to get a banana.

You have to push back against these distraction and determine what is actually important and urgent, and what is just parasitic noise trying to steal your attention.

There are two methodologies that you need to adapt if you’re finding yourself frazzled and flailing about while continually reacting to things.

Professional activities performed in a state of distraction-free concentration that push your cognitive capabilities to their limit. Their efforts create new value, improve your skill, and are hard to replicate.

Once you’ve embraced the first three rules is when the Eisenhower Matrix comes into play – draining the shallows.

Use The Eisenhower Matrix To Drain The Shallows

The Eisenhower Matrix, also referred to as Urgent-Important Matrix, helps you decide on and prioritize tasks by urgency and importance, sorting out less urgent and important tasks which you should either delegate or not do at all.2http://www.eisenhower.me/eisenhower-matrix/

Here is a two minute video that lays out how to use the Eisenhower Matrix:

Divide tasks into these four quadrants.

Once you’ve set aside time for deep work and the discipline of prioritizing your tasks, you’ll find that you can accomplish more than you ever have before. Tasks that had previously piled up will instead line up to be knocked down like dominoes.

Setting aside time for deep work and prioritizing tasks will actually give you more time – because you’ll be getting things done at a much more rapid clip.

Finally, the quality of your work will improve. When you’re no longer attempting to focus on a dozen things at once and instead dedicating your attention and energy to deep work, you’re much more likely to produce something remarkable.

And why would you want to create anything less?