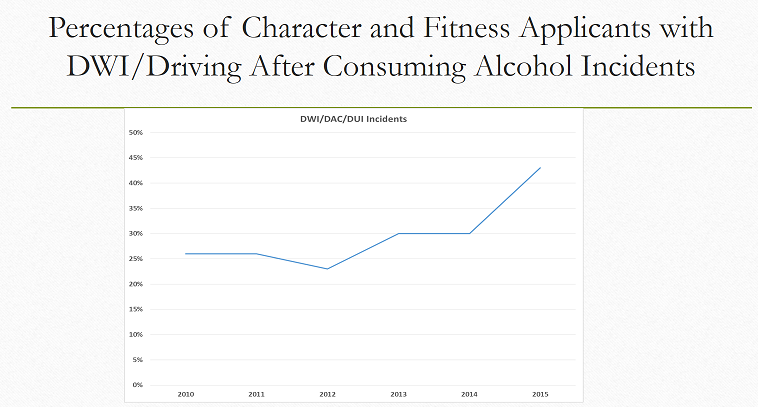 The academic quality of students applying to law school is something I’ve been writing about for quite awhile. Notably, the downturn ever since the legal market imploded back in 2007 along with everything else.

The National Conference of Bar Examiners (NCBE)1NCBE is a not-for-profit corporation that develops licensing tests for bar admission and provides character and fitness services. recently released a large data dump indicating a downward trend in a number of areas. The numbers are troubling if you’re concerned about the future of the profession.

That’s not a mistake. Almost across the board, law schools are taking in more students scoring poorly on the LSAT.

The MBE consists of 200 multiple-choice questions in the following areas: Civil Procedure, Constitutional Law, Contracts, Criminal Law and Procedure, Evidence, Real Property, and Torts. The purpose of the MBE is to assess the extent to which an examinee can apply fundamental legal principles and legal reasoning to analyze given fact patterns.2The Bar Examiner at 38, March 2017 Every state uses it except for Louisiana because they’re crazytown with their reliance on civil law.

There is a downward trend in scores.

This data is broken down into two categories: first-time Bar takers and overall.

Again, there is no getting around the numbers. Far less students are passing the Bar exam than in the past.

The MPRE consists of 60 multiple-choice questions that measure the examinee’s knowledge and understanding of established standards related to a lawyer’s professional conduct.3The Bar Examiner at 42, March 2017 The MPRE is the “ethics” test given to aspiring lawyers and given separately from the Bar Exam. 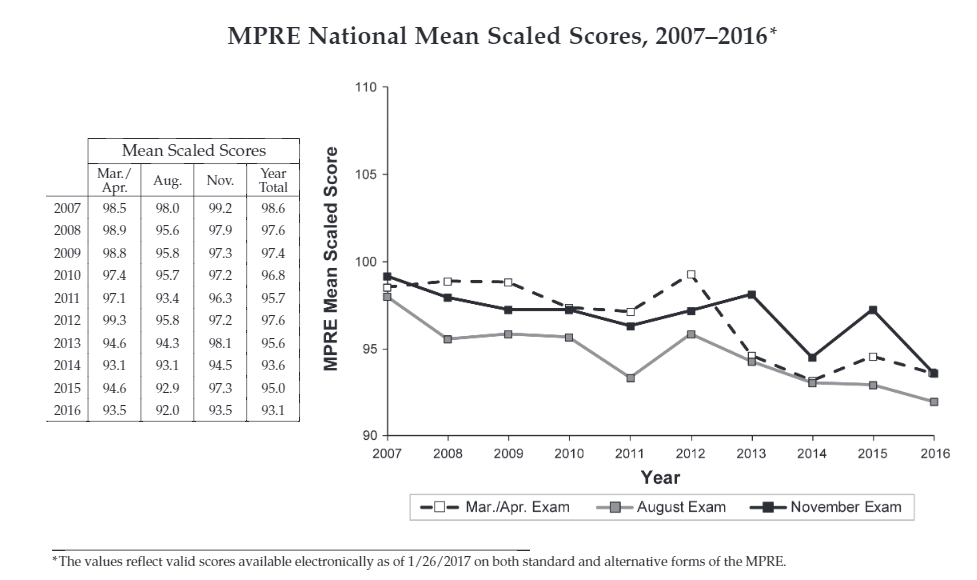 We’re getting…less ethical lawyers?! Students with lower academic achievement also don’t fair well in understanding professional conduct? This is more troubling to me. A high degree of character is essential for new lawyers. If you can’t handle the very lower bar of the MPRE, then are you going to be competently and ethically representing clients?

Every year around March 28th, the American Bar Association (ABA) has its Mental Health Day for law students. Law schools are encouraged to helps students face issues relating to addiction, depression, and anxiety. Probably because lawyers are stressed out and drink – a lot. Some studies and estimates put 1/5 of lawyers having a drinking problem. 28% of lawyers have battled bouts with depression.

Being a lawyer is a stressful job. As I am fond of saying, lawyers are magnets that only attract problems. It can wear on you.

We need to make sure that students we’re accepting into law schools are academically, emotionally, and morally ready to take on the responsibilities of representing clients. This was further highlighted to me when someone in LawyerSlack forwarded me the recently released Final Report from the North Carolina Commission on the Administration of Law and Justice (“Commission”).

The Commission was established toe valuate the North Carolina judicial system and to make recommendations to improve the administration of justice. But similar to the NCBE data, there is some troubling information in the Commission’s report.

Character and fitness issues are skyrocketing. Applicants aren’t disclosing problems, and the rate of DUIs is crazy. Look at these two trends side right next to each other. 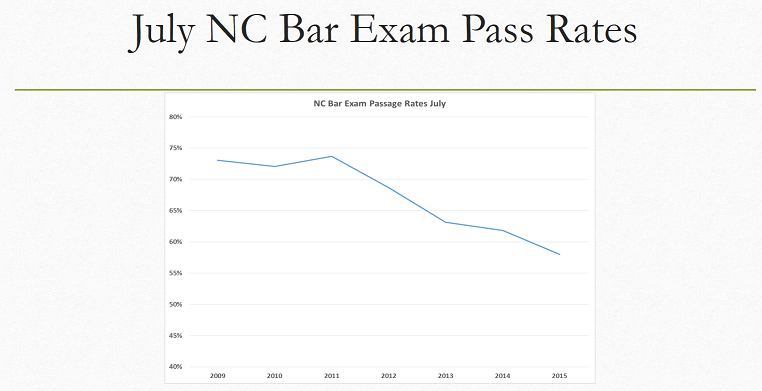 And from the NCBE report:

From 2010 to 2016, all of North Carolina’s law schools face declining enrollment, along with declining 25th% scores.4And who can forget that Charlotte School of Law was placed on ABA probation last year?

That doesn’t bode well for future the future of the profession.

A Crisis of Character

Is this a problem isolated to North Carolina or is it a part of a national trend?

The troubling answer is: we don’t know.

I commend North Carolina for commissioning this study two years ago. I looked around on my State Bar’s website and I couldn’t find any statistical information on applicants’ character and fitness issues. I’m not sure if it’s something most State Bars track.

But given the national trends in LSAT scores, Bar passages rates, and the issues facing North Carolina – they should.

All State Bars should be looking into this issue. By allowing students with lower test scores and academic qualifications to attend law school, are we also admitting students who will have difficulty in handling the pressures and responsibilities of practicing as a lawyer?