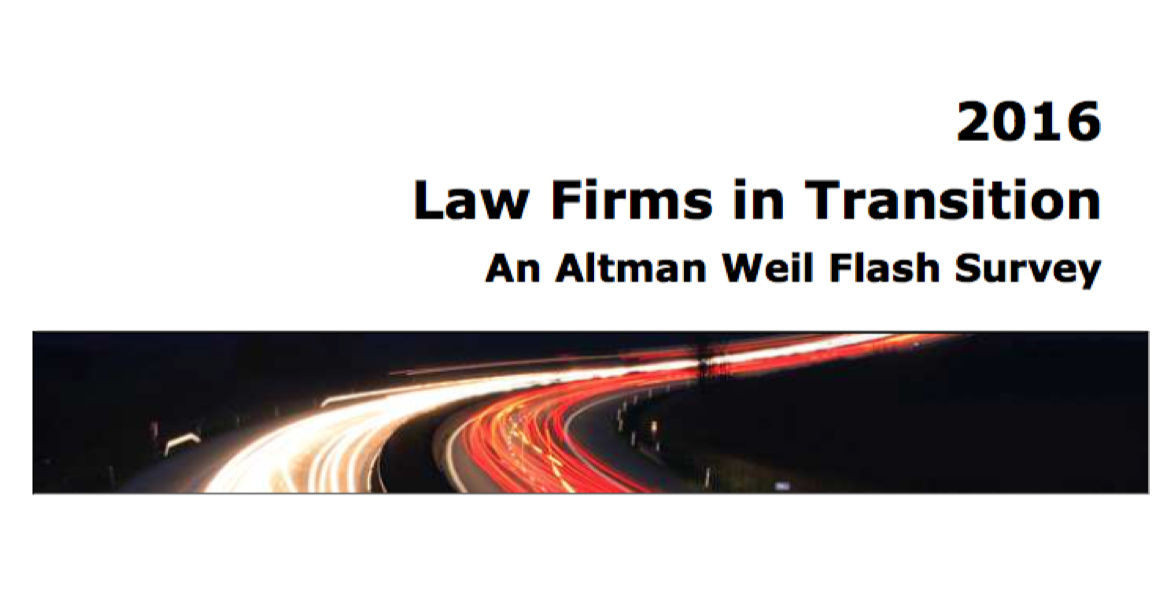 For the eighth year in a row, Altman Weil has released their latest Law Firms in Transition Survey.

Conducted in March and April 2016, the Law Firms in Transition Survey polled Managing partner and Chairs at 800 US law firms with 50 or more lawyers. Completed surveys were received from 365 firms (45%), including 49% of the 350 largest law firms.

Are law firms still in transition in 2016? We think so, although the pace of change can seem modest. Despite pockets of true innovation, most firms are choosing to proceed with lawyerly caution in the midst of a market that is being reinvented around them.

Frozen by fear? Paralyzed by choice? Looking at the survey results Altman Weil concluded that the largest law firms in the country are largely staying the course, despite being buffeted by calls for change.

I’ve selected portions of the report to highlight (in blue text), my commentary follows. 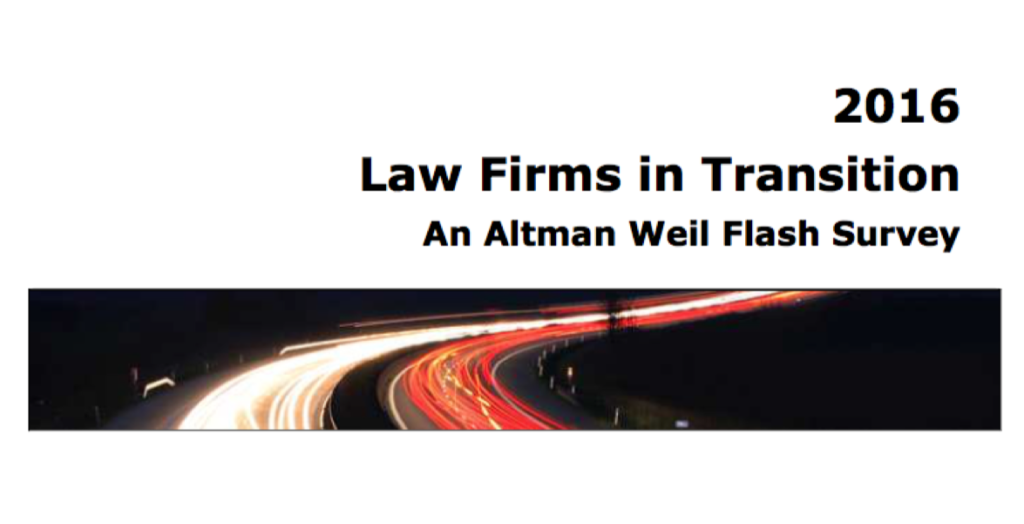 Only 38% of law firm leaders say demand for services has returned to pre-recession levels in their firms. Another 12.5% expect demand to return in 2016 or 2017, leaving nearly half of all firms that think pre-recession demand is at least three to five years away – if it returns at all.

Most firm leaders (62%) think the erosion of overall demand for work done by law firms is a permanent trend. A combination of market forces have combined to put pressure on law firms’ traditional flow of work from clients, including more price competition, seen as a permanent trend by 95% of law firm leaders, commoditization of legal work (88%) replace of human resources by technology (85%), and competition from non-traditional service providers (82%).  (emphasis mine) 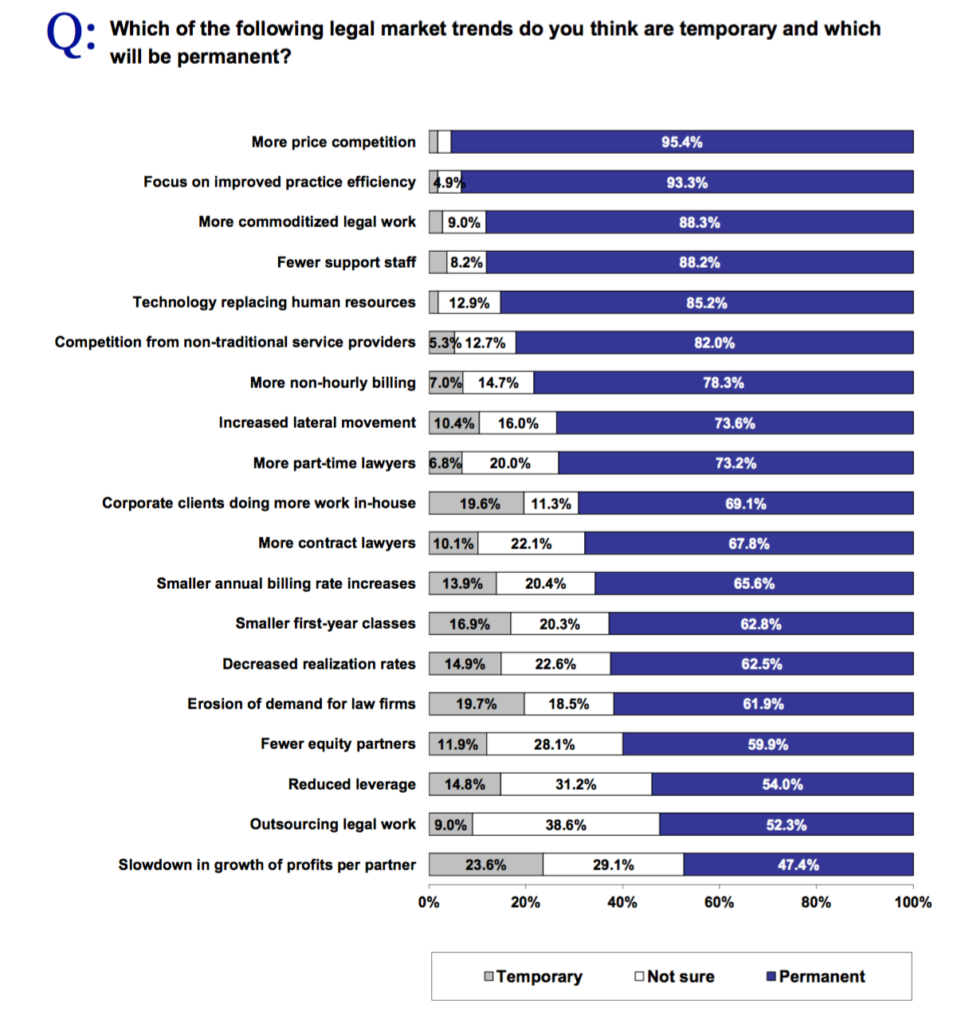 Ouch. If you’re holding your breath for things to go back to the way they were before 2007, I hope you’ve got a good set of lungs. More likely you’re going to pass out because it just isn’t going to happen. Go ahead and take the time to remember these four factors:

CCCT is going to be the name of the game for law firms (both big and small) in the future.

Too. Many. Lawyers. There’s just no other way around it. CCCT have created all sorts of downward pressure on the demand for legal services. At the same time:

Despite the fact that 93% of law firm leaders think a focus on improved practice efficiency is a permanent trend in the legal market, fewer than half of all law firms (44%) have significantly changed their strategic approach to efficiency…

The only efficiency tactics that break the 50% mark among all law firms are knowledge management (54%) and use of technology tools to replace some human resources (52%).

“Improved practice efficiency is a permanent trend in the legal market.” No shit Sherlock. OF COURSE clients want more efficiency out of what they pay for. Law firms should want it as well.

The more efficient a firm is with it’s work should free lawyers and staff to work on different matters. Again, this is trend that is going to continue to accelerate, not slow down or freeze in place.

When asked why their firms aren’t doing more to change the way they deliver legal services, 59% of firm leaders say clients aren’t asking for it and 56% say they aren’t feeling enough economic pain to motivate more significant change. Many partners are inclined to ask, “Why rock the boat?”

The biggest impediment to change, identified by 64% of law firm leaders, is that partners resis most change efforts. This factor jumped by 20 points from last year’s survey to become the most frequently identified impediment.

Old dog, new tricks, yadda yadda yadda. Because lawyers are naturally pessimistic and inclined to rely on precedent, it’s not surprising that many firms aren’t aggressive in their approach to the changing legal industry. Many lawyers also likely see calls for change as a Chesterton’s Fence fallacy:

In the matter of reforming things, as distinct from deforming them, there is one plain and simple principle; a principle which will probably be called a paradox. There exists in such a case a certain institution or law; let us say, for the sake of simplicity, a fence or gate erected across a road. The more modern type of reformer goes gaily up to it and says, “I don’t see the use of this; let us clear it away.” To which the more intelligent type of reformer will do well to answer: “If you don’t see the use of it, I certainly won’t let you clear it away. Go away and think. Then, when you can come back and tell me that you do see the use of it, I may allow you to destroy it.

Put simply, don’t ever take a fence down until you know the reason why it was put up. Many law firm leaders look at how their firms have operated for decades and are not inclined to tear things down before they fully understand what they are going to put in its place.

Another factor is that many law firms leaders are likely in their sixties or older. They likely think if they can just hold out for another decade, they can just retire and it can all be someone else’s problem.

Add It All Up… 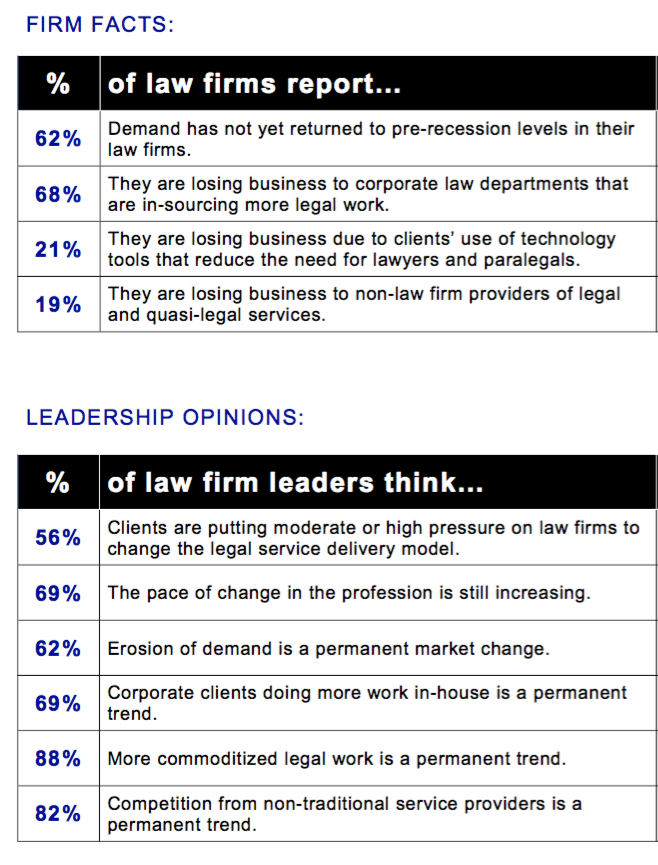 …and it looks like lean times are going to continue in the legal industry. As I noted earlier this year at Above The Law, if you’re average, you’re probably going to go out of business:

“Good enough” was never really good enough of course, but plenty of people were able to get by with it. Lawyers included.

Thanks to CCCT, we’re are moving towards a “winner-takes-all” ecosystem of lawyers. Law firm consolidation continues to accelerate. Legal work is going to continue to be in-housed, commoditized, or replaced with technological solutions. Competition for what remains will be more frenzied and intense. Going forwards, there are going to be fewer players fighting over the shrinking available work.

The 21st century is an era of hypercompetition. Any business that wants to compete must not only be doing well by their own standards, they have to be doing better than everyone else as well. Consider the following:

If you think you can just wait things out and this is going to all blow over, I got bad news for you – it ain’t.

You can download and read the whole report here.

If you’re in law school or a new lawyer and reading all this just made you second guess your life choices, you should read my book.