Who Will Disrupt The Disruptors? 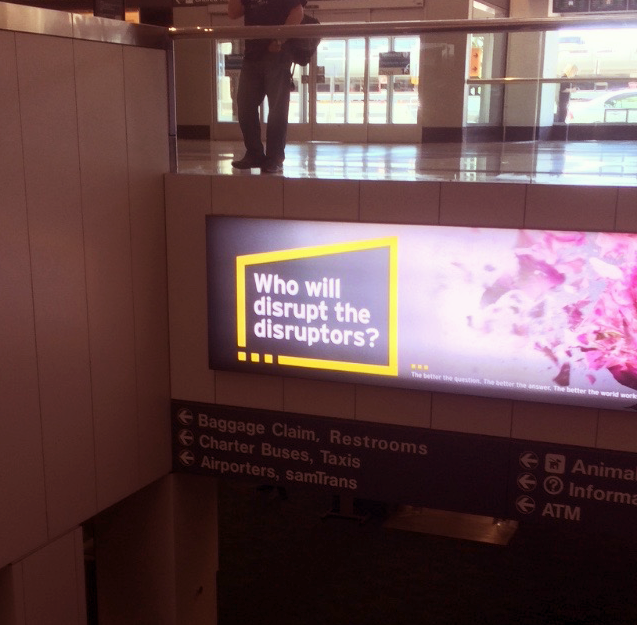 “I could tell you’re from the South by the way you said ‘naked,'” she said.

“Honey, there’s a difference between ‘naked’ and ‘nekkid,’ and I’m fixin’ to explain it to you,” I replied.

I hadn’t planned on explaining the nuance of Southern idioms to the wife of Eddie Hartman, one of the co-founders of LegalZoom, at a party in Silicon Valley, but it’s where I found myself this past Friday night.

But that’s jumping ahead to the end of my week. Let’s start at the beginning.

The above image was one of the first things that greeted me upon landing at SFO. The fact that someone in a marketing department felt that they could use such a phrase non-ironically in an advertisement was a sure sign that I was heading into the Twilight Zone.

I had been invited to the Stanford CodeX Future Law 2016 Conference to compete in a moot court where the legal technology industry was put on trial in 2020, for false claims it had made in 2016. Sam Glover from Lawyerist and I were representing the plaintiff.

As I wrote in my original post on the topic, it was as about a hostile venue as you could get. FYI – It’s not a good sign when the defendants are introduced and the entire crowd breaks into applause. But I’m jumping ahead again.

I Uber’d from SFO to the AirBnB in Palo Alto I was staying in for the week. That was an appropriately Silicon Valley sentence wasn’t it? If only I had disrupted something on my way there.

I had a carriage house behind a small bungalow, which was also a permanent AirBnB residence, not someone’s home. It was a nice neighborhood, adjacent to Stanford’s campus. The type of quiet, family place you find all across the country. On the surface, you can find neighborhood’s like it across the country. But when you lay a meta-layer of internet over it: 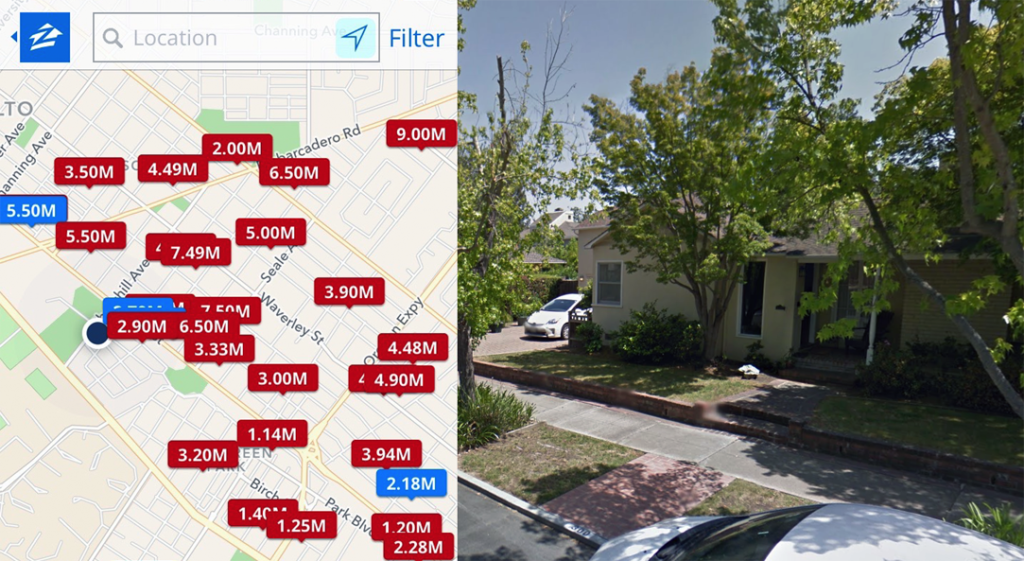 You find that what would be a modest home almost anywhere else in the country costs $2.9 million here. Reality distortion field indeed.

As I laid in bed that night I looked over the agenda and speakers for the conference. It was a veritable “who’s who” in legaltech. The attendee list showed that the conference had drawn people from around the world, curious for a glimpse of the mythical “future of law.”

There were dozens of other legaltech startups of course. Some sounded like they had potential, others were merely flights of fancy, or yet another practice management platform that was pretty much the same as all the rest, but this time it was purple instead of blue. Most will likely fail, some will muddle along, others will be scooped up by Thompson or Lexis once they show some promise.

While I was in Silicon Valley exploring the bowels of legaltech, four companies stood out:

These companies are dots on the spectrum of legal technology with LegalZoom and RocketLawyer being firmly in the “we made it” category, and CaseText and ROSS Intelligence in the “promising up and comers” startup phase.

The following morning I hopped on CalTrain to San Francisco to stop in at RocketLawyer and chat with their GC, Alon Rotem. RocketLawyer is a legaltech startup that…well, was a legaltech startup. Founded in 2008 and with millions of dollars in VC money from Google and the like, they’re solidly in the firmly established business at this point. Their offices are in a couple of floors in a building in SoMa down the street from LinkedIn.

RocketLawyer took some flak earlier this year regarding a pilot program they conceived with the ABA called “ABA Law Connect.” Using RocketLawyer’s technology platform, ABA Law Connect allowed customers to pay $4.95 to ask an ABA-member lawyer a question online and a follow-up question. The lawyer and client could negotiate for further services. Despite only being a pilot program, it was quickly attacked by local bar associations. You can find details, interviews, and rebuttals here.

The bottom line is that Rocket Lawyer and other similar entities should not be left unchallenged. They are simply profit-making ventures less interested in providing competent legal advice than they are in getting a large segment of the market to purchase and use their products and increase their own profits. This is a segment of the market that may not be equipped to understand that they are very possibly —and quite likely — getting less than competent legal advice.

Which is a fair enough criticism I suppose, but last I checked, most law firms are profit-making ventures as well. Unless you’re doing some sort of pro bono/legal aid,  most lawyers aren’t doing this out of the goodness of their heart. The difference is that lawyers are bound by ethical duties of professional conduct. A lawyer’s duty is ultimately due to his client; a corporation, its shareholders. If a client had a problem which could be solved identically by:

And the client would never know the difference, what happens? Theoretically, the lawyer picks option A, because his duty is to the client. But if a corporation’s duty is to create value for shareholders, do they choose Option B over Option A? Where does the ethical duty lie? It’s one of the issues many lawyers have with non-lawyers being able to become equity shareholders in law firms.

But just because someone isn’t a lawyer doesn’t mean they can’t conduct themselves with ethics and standards. Why do people choose one mechanic or plumber over another? Because of the level of care and service they receive. Because they feel like they aren’t getting ripped off.

And passing the bar doesn’t suddenly convey upon someone a magical level of moral constraint. Lawyers can easily be as unethical as anyone else. More than once while I was at the conference I brought up the example of lawyers collaborating on Reddit to game their Avvo scores.

It’s a complicated problem with no easy answers. Technology isn’t going to seamlessly be able to connect paying clients with good lawyers. It’s going to be a slow, lumbering process with many false starts. Upending the way the legal profession connects with clients is not going to be easy. But people are tired of not knowing how to find a good lawyer. Since lawyers don’t seem to have or want to develop a solution, technology companies are trying to figure it out.

Whether it’s RocketLawyer or bar associations or something else remains to be seen. But I have little doubt that lawyer/client marketplaces, ranking services, and assisted legal services are only going to continue to grow in the future. It’s more of a question of how involved/how much impact lawyers want to have on their development.

Regardless, lawyers need to do some deep thinking about the future, because of the coming alternative of getting legal services directly from a company like LegalZoom, soon possible in the UK with their acquisition of a 200 year old law firm. Which is what Eddie Hartman outlined in his talk, An Introduction to the UK’s Alternative Business Structure, which I’ll discuss tomorrow.

Law is too important to be left to lawyers alone. @EddieRHartman #FutureLaw2016