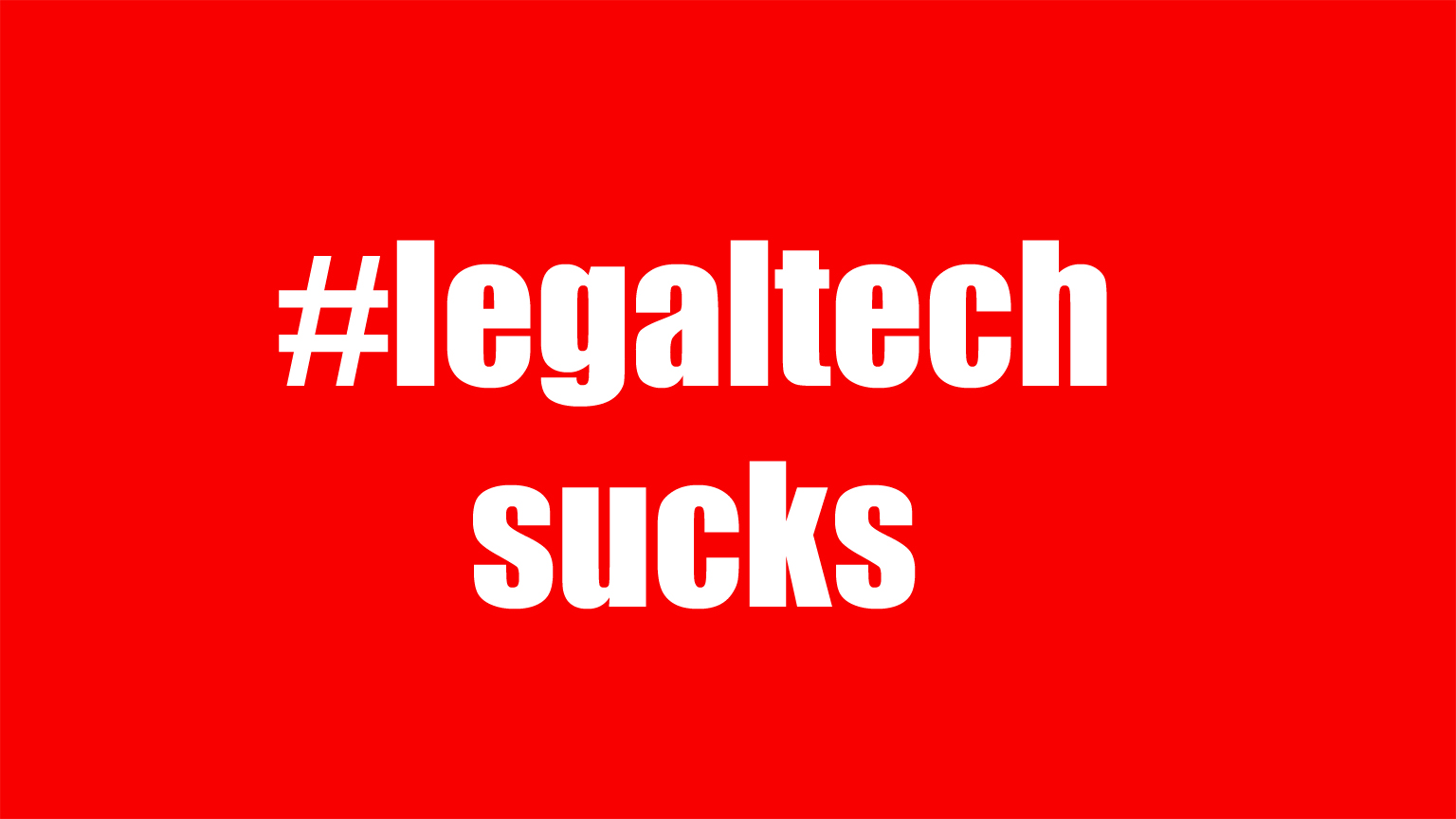 #LEGALTECH! There is always some new legal technology app, start-up, or service that is coming down the pipe that is going to ‘revolutionize’ or ‘disrupt’ everything (and if you’re lucky, sometimes you’ll catch the elusive double-disruption in the wild). Of course, most of them aren’t revolutionary or disruptive. More often than not, they’re just a retread of the same old thing. Or if they do offer something new, it’s not actually that significant or exciting.

Revolutionary change is rare. That’s why it’s revolutionary. But a company that has a new product which offers “sustainable, incremental improvements over existing platforms and workflows” isn’t exactly as sexy sounding as “will disrupt entire industry.” I think part of the reason that many in start-up culture end up adopting such inflated language is because they’re not actually trying to obtain customers, but obtain acquisition. They’re too busy chasing VC money instead of developing a business model.

Another issue is building shit that nobody wants or needs. This happens waaaayyy too often. Lots of tech folks think they know what lawyers want or need. But they never actually get around to speaking with lawyers or understanding lawyers workflows and processes. Or maybe they speak to a few lawyers, but then build a tool for an entirely different practice area. It’s tough to build a tool for every single lawyer because firms differ greatly dependent of size, practice area, and location.

And of course, many are just flat out liars.

Hey! Speaking of disruptive claims, a product no one needs, and lying, Foxwordy relaunched recently! 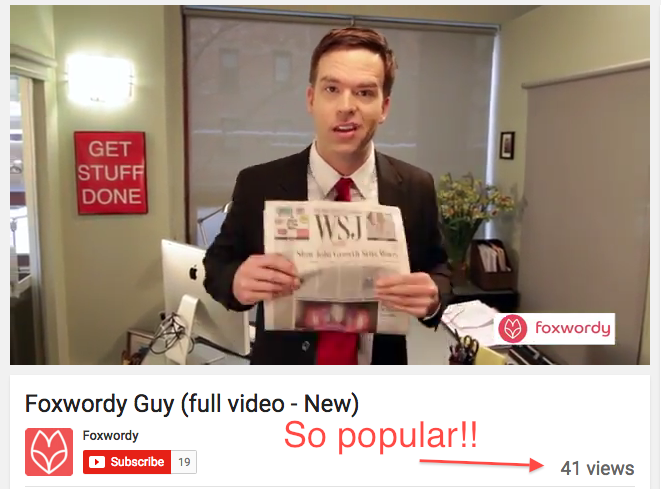 Foxwordy is a professional networking site for lawyers. Despite repeatedly being called out for claiming to be the “first private social network exclusively for lawyers,” when it is the furthest thing from, they just keep saying it over and over again.

Maybe they think if they say it enough it will magically become true?  Of course, pointing out that their baby is ugly is mean. Telling them that no one wants it hurts their feelings. Eventually Foxwordy CEO Monica Zent got so fed up, she banned Robert Ambrogi from the site. Then me and a few other lawyers started asking Zent about banning Bob and why anyone would use the her service. These were uncomfortable questions so she just blocked us.

Anyway, Foxwordy revamped its service and relaunched. According to Bob: “Zent characterizes Foxwordy more as a “social productivity” platform for sharing and collaboration among lawyers.” Essentially, they want to be Slack for lawyers. But as Jason Wilson pointed out in a comment in Bob’s post:

How many law firms have implemented Slack or even know what it is? Teams features are great, but if you go to a firm looking to shave costs in every department, telling them they can get this productivity tool that sort of replaces email for (introductory) $15/per month/per user, will most likely fall on deaf ears. But I wish them luck.

The main issue is that many lawyers are slow to adopt new technology. They’re not “on a team,” in a company. They’re independent, ancillary service providers that have dozens, if not hundreds of clients. They need a communications service that is:

Oh yeah, that exists. It’s called email. Why is a law firm going to add a new communications tool when they already have one that they have to use?

If a law firm does want to adopt an inter-office communication tool, Slack is free for the most recent 10k messages. If you want unlimited storage, integration with everything under the sun, groups, etc., it’s $7 a month. Half of what Foxwordy charges.

Beyond that, do lawyers actually need a private, social collaboration tool? Probably not. For better or worse, lawyers are happy with email. Social collaboration? Despite many other industries having left them in the past, lawyers have adopted and used email listservs for decades. You can find national listservs like Solosez which covers everything under the sun. There are also local or practice-specific listservs which allow lawyers to connect with people near them or relevant to their practice area.

But email is old and clunky! It’s not a good collaboration tool! It’s not teh Social!!!11!

Agreed. Email is not ideal. Listservs kind of suck. So an opportunity exists for a private social network for lawyers!!

Well, here’s the thing. There is this site called Facebook. Have you heard of it? Facebook already provides private, invite-only groups in which people can collaborate, calendar events, post and share documents, and refer business. There are dozens, if not hundreds, of such groups on Facebook (shout out to Successfully Solo Friends). Oh and everyone already has an account on it. And it’s free.

But I don’t want to lawyer it up on FB! I want to remain anonymous. Cool. Then you should join the thousands of lawyers in r/lawyers at Reddit. Private, lawyer-only, open discussion across practice areas, referrals, sharing of documents, etc. Anonymous. Free.

Plus plenty of lawyers just talk out in the open. Twitter, blogs, new services like Casetext. Many lawyers don’t need or want a private platform. Or if they really do want to go private, they go to email.

The point is, there are already numerous platforms out there that allow for everything that Foxwordy claims it does that are: established, already in use by thousands of lawyers, work better, and free. So why the hell is anyone going to use Foxwordy? Especially when they’ve got a track record of lying about their product and block people at the slightest criticism.

Add it all up and Foxwordy is a dud. It’ll likely limp along for awhile because the relative costs of keeping something like this online is pretty low. That being said, I doubt it gets any traction. If they’re still around in a couple years I’ll be surprised.

And given that they inflate their claims and run from confrontation (not high quality traits when looking at lawyers), I don’t wish them luck. Sorry, not sorry.

Speaking of #legaltech, Stanford’s Annual Codex Future Law Conference is coming up on May 20th. Of note:

Imagine it is the year 2020.  Plaintiff, a dissatisfied attorney, has brought suit against the entire legal tech industry, alleging that the claims and promises it made in 2016 amount to fraud and false advertising.  Using a moot court format, this session explores some of the legal tech community’s grander predictions, and examines the various ways the community might succeed (or fail) in reaching these lofty goals.

Sam Glover of Lawyerist and I are co-counsel, representing the Plaintiff.