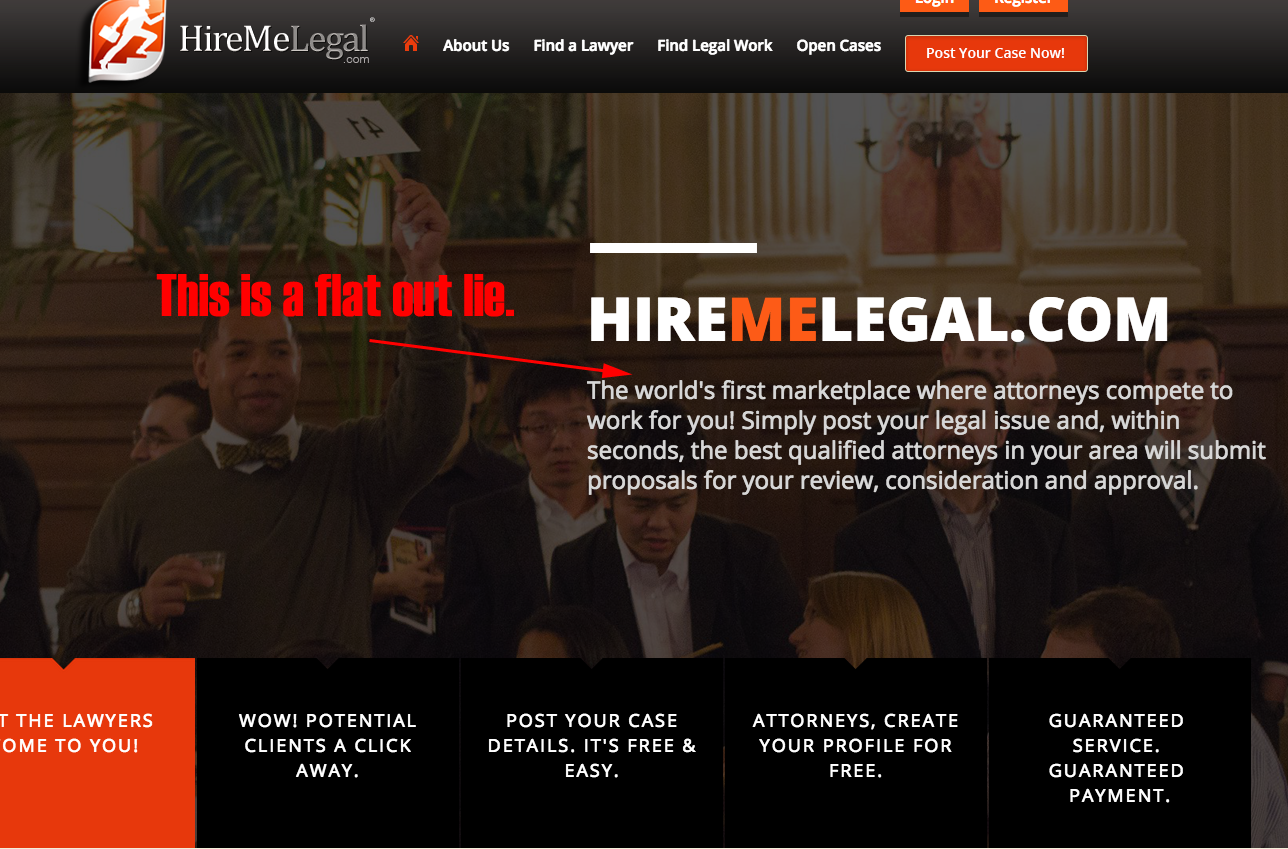 This morning I received a press release, which is nothing worthy of comment in and of itself. I get lots of press releases. usually from some PR company that wants to promote a lawyer’s recent: book, case, appearance in the news, conference, etc. I also get lots of press releases from legal technology startups. These are usually over-the-top in their enthusiasm at the advent of the intersection of technology and law. They are also usually full of hot air. Usually I ignore them, but something about this one caught my eye. Maybe you’ll see it too: 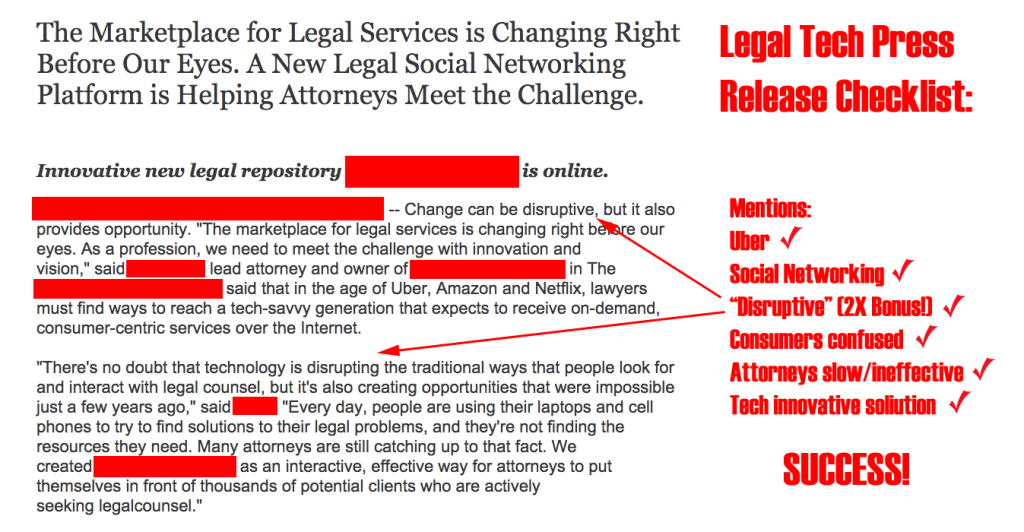 It’s overwrought with cliche and buzzwords. There is no real substance. I would have normally left it at the above along with a few snarky quips on Twitter. But upon clicking through and poking around, I had my hackles raised. Let’s look at some of the claims of hiremelegal.com

Upon looking at HireMeLegal’s website, I immediately thought of Robert Ambrogi’s post on Foxworthy from a couple of months ago, in which Amrbogi highlighted the deceptive claims made by Foxworthy:

Would you want to join a social network for lawyers whose basic marketing pitch is a lie?

Long-time readers of this blog will know that it bugs me when vendors make claims about their products or services that are not true. It makes me distrust the vendor and distrust its product.

So why does Foxwordy persist in claiming it is “the first private social network for lawyers”? That is not true by a long shot. And Foxwordy knows it is not true.

Right off the bat, HireMeLegal does the same thing: 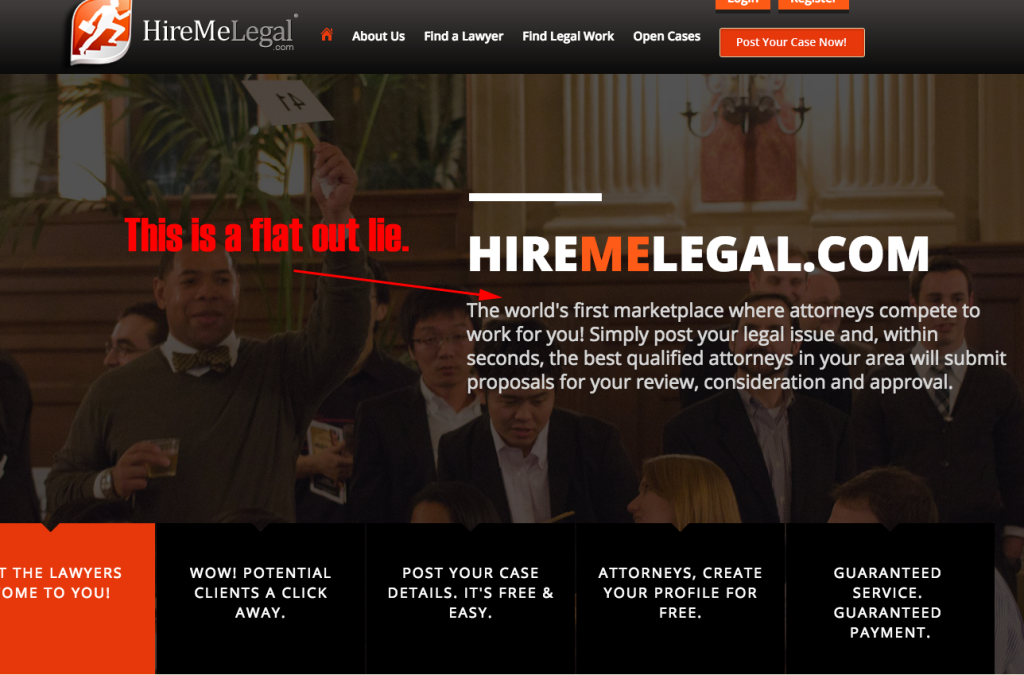 There have been marketplaces for consumers and attorneys for years. Most of them fail (Shpoonkle anyone?) or limp along without anyone noticing (Lawdingo). Yet being honest and forthright (this is an old tired idea that has never worked) doesn’t really sound good. Far better to cry from the rafters that you are “innovative” and “first,” even when you are clearly not:

The fact of the matter, however, is that the reverse-auction sites for legal services is not Niznik’s brainchild. Several such sites have been launched in the past. If we have forgotten them, it is because they failed.

Way back in 2006, I wrote a post here about the launch of just such a site. Called Tip-Mart, it promised that its reverse-auction system “eliminates extraordinary market inefficiencies, drives down prices, increases sales, and provides new value to both buyers and sellers.” Coincidentally, it too was created by a college student who believed he had the next new thing. Today, the site no longer exists.

As a matter of fact, there was even once a law review article written about reverse-auction sites for legal services. At the time, the author noted that there were six such sites when she finished her first draft of the article, but that two had already shut down by the time the article was ready for publication and a third had abandoned its auction component.

The next thing to do is, of course, incredibly inflate the adoption of your service to appear larger than you are. On HireMeLegal’s homepage it claims to have the following:

Nearly 250,000 attorneys?! 25% of all attorneys in the entire country have signed up for your brand new service? That, quite frankly, is absurd. What likely occurred was the people behind HireMeLegal used a bot to scrape a directory of lawyers somewhere, and then just put all the information on their marketplace whether they wanted to be there or not. That’s why I was able to find the Texas attorney “Immigration Specialists:” 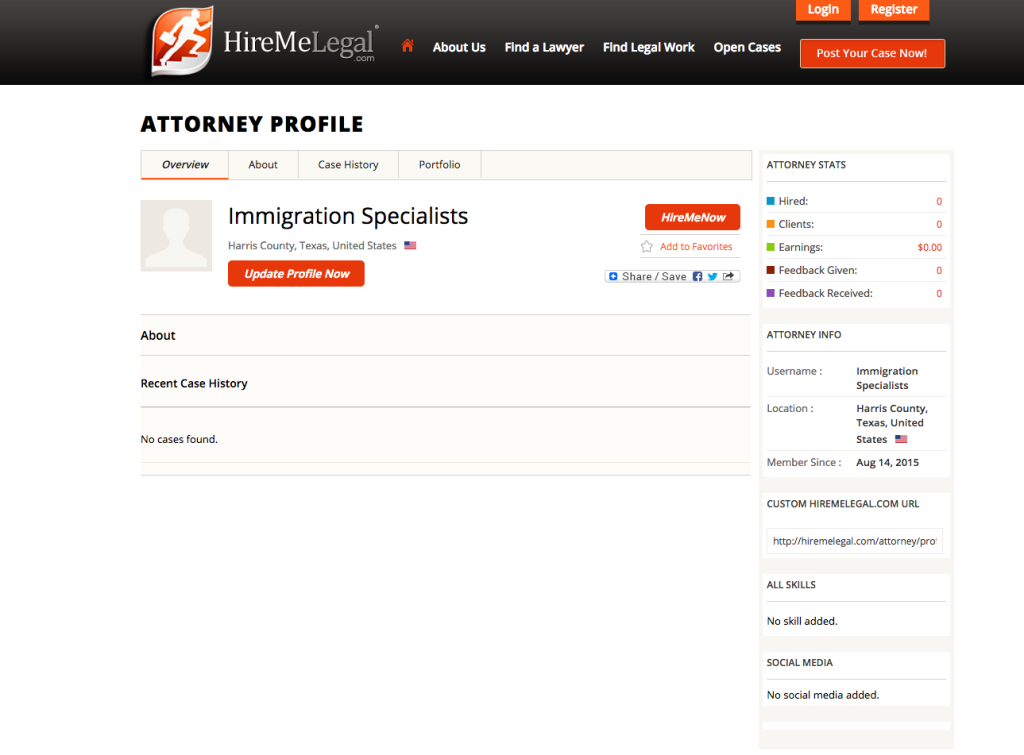 I hear he’s all the rage in Harris County. I wonder if Mark Bennett knows him? Anyway, as we all know, scraping personal information and plugging it into your service without permission always goes real well. Lawyers in particular are really taken with it.

Also, just throwing this out there, does having your name on a reverse auction site qualify as advertising under bar rules and regulations? Are requisite disclaimers (per state) there? Just curious.

Here we have another legal tech company, trying to gain traction and attention, by any mean necessary. My premise (that I now fear is going to outlive me) regarding lawyers and technology holds true here as ever:

It’s not that lawyers are anti-technology, it’s that they are anti-bullshit.

There is nothing wrong with coming into the legal industry with new ideas or technology. Come on in, tell me all about it. If it’s good, and will help lawyers practice, I want to hear about it and will sing its praises. But when your first contact involves puffery and extravagantly false claims, you’ve lost all credibility. It’s gone. And it’s nearly impossible to get it back. It’s one of the reasons if you ask any long practicing lawyer or judge they will tell you your reputation is the most valuable thing you possess as a lawyer. Don’t squander it. Especially don’t outsource it to a marketing hack.

Regardless, considering there are 24 open cases on the site, have at it if you want to compete with “250,000” other lawyers.