A Gentleman’s Watch: A Devotion to the Minutia 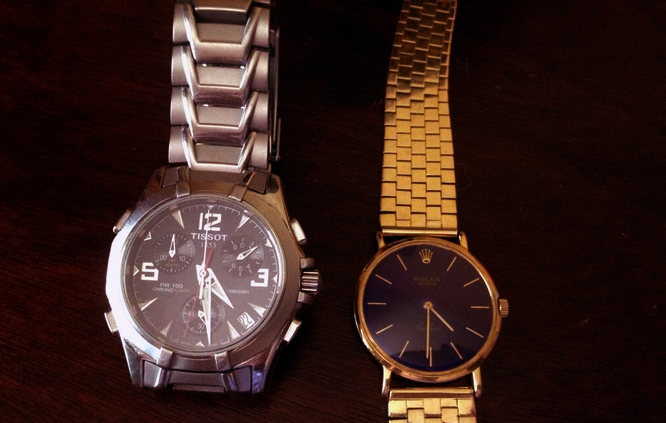 There has been a bit of a discussion in legal blogs over the appropriate attire for lawyers (particularly men). It began with a post on Above The Law by Joe Patrice, This Partner Wants You To Dress Up So You Can Be A Tool Just Like Him:

There’s something to be said for cultivating the ethos of a professional, and there is support for the theory that clothing choices actually impact the individual’s performance. But Gross doesn’t really sell those points. Lawyers already dress up when meeting with clients in a business casual setting, so the argument that business attire fills clients with confidence is moot. Once you get beyond that claim, there’s basically no argument for dressing up in this profile other than “look at how awesome I look,” which would be a better sell if the profile wasn’t totally goofy.

In response, Scott Greenfield posted A Fool, A Tool, and A Suit:

Don’t want to wear suits? Who cares. Wear whatever floats your boat. But the fact that Wayne Gross wears “that hilarious pocket square” that doesn’t rise to the level of Joe Patrice’s sartorial splendor neither makes Gross “comedy gold” nor a target for infantile snark.  It’s not that Patrice is just petty and mean-spirited in his use of ATL to attack Gross for having a different preference in lawyer dress, but that he calls Gross “a tool,” as is any lawyer who agrees with Gross.  Better that lawyers should take their style cues from Patrice?

Then today, tangentially related to the above posts, Greenfield posted, Boomers Love Watches (and you can too!):

…the wristwatch is one of the two (arguably three) things a man can wear without looking like a dandy. It not only enables you to take a quick glance at your wrist rather than pull out your iToy to tell the time, but it makes you a member of the elite group of people who appreciate the genius of the watchmakers who, somehow, figured out that a bunch of gears oscillating at just the right speed could actually tell time. What an extraordinary thing to do!

Wear a wristwatch. You don’t need to spend a fortune or wear one to impress the least knowledgeable person in the room. Know that there are people, a lot more than you think, who will see what’s on your wrist and know that you’re part of the club. And it’s a great club.

Perhaps one of the worst things you can be as a lawyer (in life really) is to be average. Who wants to be average? I don’t think anyone aspires to be just middle-of-the-road. If you want to find success, you can’t be average. Tremendous achievement requires tremendous effort. You can’t be a worker bee. And success is often not made up of a few grand gestures, but rather a devotion to the minutiae. The thousands of small things that add up to more than the sum of their parts.

Being a professional, being a lawyer, means looking professional. Maybe this doesn’t mean a suit every single day – but it does mean so most days. It also means paying attention to the accoutrement that go along with wearing a suit. The tie, the shoes, and yes, the watch.

My Tissot that I wear daily, and my Rolex, inherited from my Grandfather.

I am by no means a watch aficionado, but I do acknowledge and understand the importance of having a nice watch. As Greenfield notes, it’s one of the few pieces of jewelry that men can wear without looking silly. A nice watch signifies that you are a part of an an exclusive club.

A few years ago I was in a sauna at a ski resort in Bachelor Gulch. Other than a towel, the only things I had on were my wedding ring and my Tissot. An older gentleman was the only other person in the sauna. After sitting in silence for a couple minutes, the older gentleman asked “Is that a Patek Philippe?” I responded in the negative, then went on to discuss watches, the resort, our jobs, families, etc. We ended up sharing in Après-ski the following day. All because I happened to have on a nice watch.

A watch is a conversation starter. The watch you choose to wear can communicate volumes about the type of person you are. Another lawyer in the thread on Greenfiled’s watch post praises his Timex Ironman for its utility related to his running. It likely signifies that he is a physically active person. It presents an opportunity for someone else to engage with him as to why he wears it. The same holds true for a nice watch. A nice watch is a small detail that is likely not noticed by the majority of people who you meet. Only a small few, mostly those in the club, will look at your watch curiosity. But it is a means of connection, a way with which to find common ground among strangers – even adversaries.

And oddly enough, almost every successful lawyer I know wears a nice watch. Funny how that works.