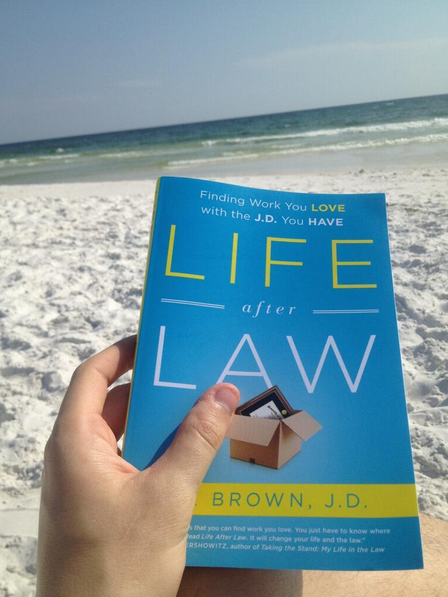 The beach felt like an appropriate place to read it.

This past week I received an advance review copy of Life After Law: Finding Work You Love With the J.D. You Have, by Liz Brown. Brown is a former litigation partner at a large international law firm.  She graduated from Harvard College and Harvard Law School. She eventually left practice and became the executive director of a large angel investor network in the United States, before finally settling down to teach business law at Bentley University. That is to say, she is someone who has found her own separate and unique life after being a practicing lawyer.

Life After Law pulls no punches from the start. It is part of a new generation of books for lawyers published in the post-2008 crushing legal market. Brown sets out right at the beginning that being a lawyer is hard and that many lawyers are miserable, often because they should have never gone to law school in the first place. All in all, Brown does not paint that rosey of a picture of the practice of law (albeit with caveats that some lawyers love their practice).

Before Brown launches methods of discovering alternative careers for lawyers, she does something I appreciate and wholeheartedly agree with – she hammers home the point of having developed tangible, valuable skills. Without spending significant amounts of time and effort in developing legal skills – writing, speaking, research, analysis – there is little point in trying to find an alternative career, because you won’t have anything to bring to the table (think: So Good They Can’t Ignore You). From that foundation, Brown goes on to lay out methodologies and plans wherein a discontent lawyer could explore different career alternatives. There are good activities here that I think could prove useful for a lawyer looking to make a graceful exit into a different job.

But the majority of the book is spent profiling thirty lawyers who left legal practice and went onto become writers, entrepreneurs, analysts, professors, consultants, advocates, and healers. The profiles are interesting, ranging from a lawyer who became a rabbi to Above The Law’s Elie Mystal, and provide examples of lawyers who turned away from practice and found rewarding alternative careers.

Here is where I have a few problems with Life After Law. I enjoyed reading the profiles, the ex-lawyers all had interesting stories about their exit from pratice. Yet, almost every single lawyer profiled followed the template of: Ivy League (or close) education -> big firm -> step away for a couple years -> find new job. That’s a fairly thin slice of the profession. Sure, someone who has a big firm job (and salary) can step away from practice after a couple years if they have built up reserves to cushion the loss in salary or they have a spouse to rely on. One lawyer profiled stated that after quitting her firm job, she spent six months living in Paris while deciding what to do next. Nice if you can manage it – but an unrealistic option for most lawyers. It would have been nice to see profiles of some not-so illustrious lawyers. A lawyer who had done DUI work in Spokane for eight years before becoming a librarian.

Also, every lawyer profiled went onto become an unmitigated success in their alternative career. I understand that Brown is trying to convey a message that it’s okay to leave a law job and find a different career, but it would have been nice to see some lawyers profiled who tried alternative careers and failed or had only marginal success to provide a more even handed perspective. Given the dismal employment statistics facing lawyers at the moment, it would have been nice to highlight the significant risk that comes along with leaving the practice of law.

If you’re looking for inspiring stories of lawyers who left practice and moved into rewarding new careers, look no further. Brown also provides a good framework and plan for exploring alternative careers paths if you’re thinking about walking away from the profession. But the book also paints a little too rosy of a picture for me. I would have liked to seen more on the tribulations involved in changing careers and hearing from average lawyers and those who have struggled with the transition. Still, recommended for lawyers who are looking for an alternative to practicing law.