Review: So Good They Can’t Ignore You 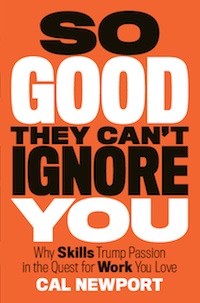 First off: God I hope this book becomes popular. It’s not perfect, but an entire generation needs to hear its message.

I recently received a review copy of Cal Newport’s “So Good They Can’t Ignore You.” Newport achieved a cult following in the past couple of years while finishing his computer science PhD at MIT with his blog Study Hacks. Study Hacks has chronicled Newport’s quest for developing a cohesive hypothesis as to how to:

The overarching, contrarian message of his blog, now distilled into So Good They Can’t Ignore You, is simple:

“Follow your passion” is stupid advice for most people. (He probably wouldn’t put it that way but I will.)

But “follow your passion” is perhaps the most loudly trumpeted career advice given to everyone under 30. “Follow your passion” and you’ll find fulfilling careers, engaging co-workers, financial success, etc. There’s an entire industry of banal lifestyle marketing gurus encouraging everyone to quit their jobs and pursue lifestyle careers. Have the courage to quit your job and follow your passion will lead to great work. But as Newport points out:

Newport gives the example of a woman who had a successful career in advertising and marketing. But inspired by moronic lifestyle gurus, she quit her job to follow her passion of practicing yoga. She spent $4,000 and took a 200 hour “instructor” course. For anyone who has obtained some degree of mastery in a complex skill set, the idea that 200 hours will propel you to the level of “instructor” is ludicrous. For example:

Traditionally, a black belt has only meant one thing: you were now considered a serious student. Everything before was playtime. Training wheels. Getting a black belt only signifies that you have mastered the basics and are ready to begin dedicated study. The same is true with a J.D. Having a J.D. doesn’t indicate mastery of the law. It doesn’t guarantee you success, a six-figure job, or celebrity. It’s just a signifier that you are ready to step onto the playing field. What follows is up to you.

And passion is probably not going to get you very far. As Newport notes:

“The downside of the passion mindset is that it strips away merit…launching a career that gives you control, creativity, and impact is easy…Career-capital theory disagrees. It tells us that great work doesn’t just require great courage [to follow your passion], but also skill of great (and real) value. When [the woman] left her advertising career to start a yoga studio, not only did she discard the career capital acquired over many years in the marketing industry, but she transitioned into an unrelated field where she had almost no capital.

The result? The woman texts: “‘I’m at the food stamps office right now, waiting.’ It’s signed: ‘Sent from my iPhone.’”

Newport instead suggests a completely different mindset. Don’t follow your passion, instead focus on your work. Become dedicated to what you do. Delve into deliberate practice and work. Become a craftsman. Devote yourself to your practice or profession. As Newport notes, working from “finding your passion” asks what the world can do for you. Working at being a craftsman asks what can you give to the world. How to achieve this?

A quote from comedian Steve Martin captures what is needed to build a working life you love. From a 2007 interview with Charlie Rose when asked what his advice was for aspiring entertainers:

To this end, Newport suggests 4 rules he and others have used to build their careers:

The book then delves deeply into each Rule, laying out example after example as to why hard work and deliberate practice are key to finding happiness and success in your work.

Is it a perfect book? No. Almost everyone Newport profiles are people who were already on successful trajectories anyway. Ivy Leaguers, etc. His prose is a bit rough around the edges and doesn’t exactly flow naturally from section to section. The book also sometimes feels assembled from individual components instead of one comprehensive narrative. But it’s message is clear and valuable.

You could probably get a lot of the same material and messages from spending hours navigating through his blog. But it won’t be structured and laid out for you in one convenient package. If you’re one of the millions of Gen Y floundering around searching for passion in your life, do yourself a favor and just buy this book.