Why You Probably Suck At Twitter (You Don’t Cheat) 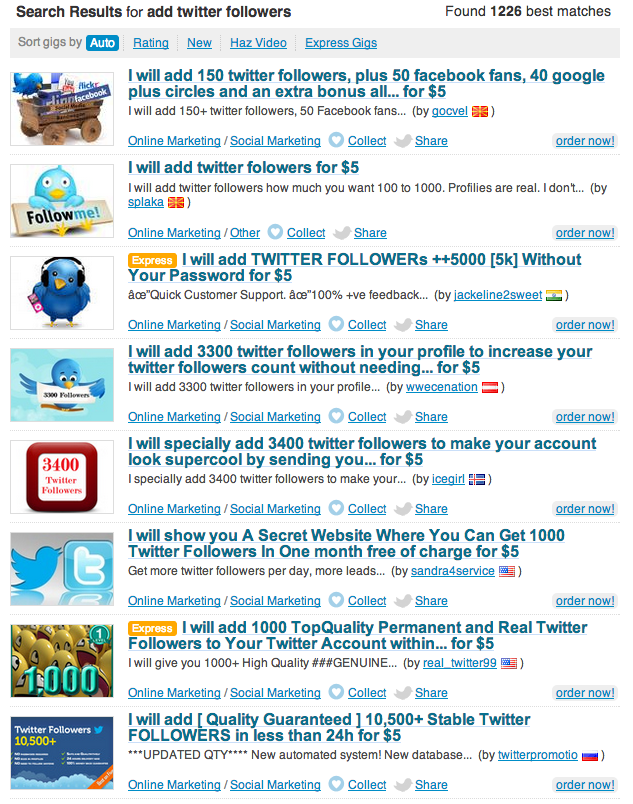 A couple of days ago I received an email encouraging me to cheat.

It was from Twitter. Here is the pertinent part of the message: 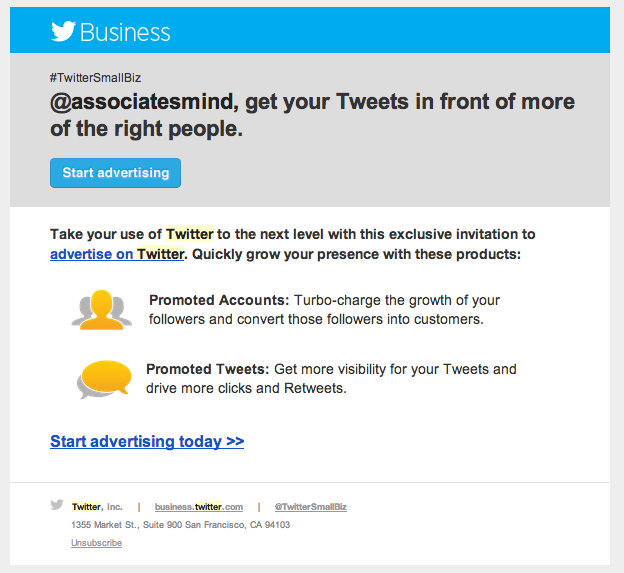 Twitter was offering two methods of advertising. Neither involved any sort of ad placement or banner placement. Rather they offered: 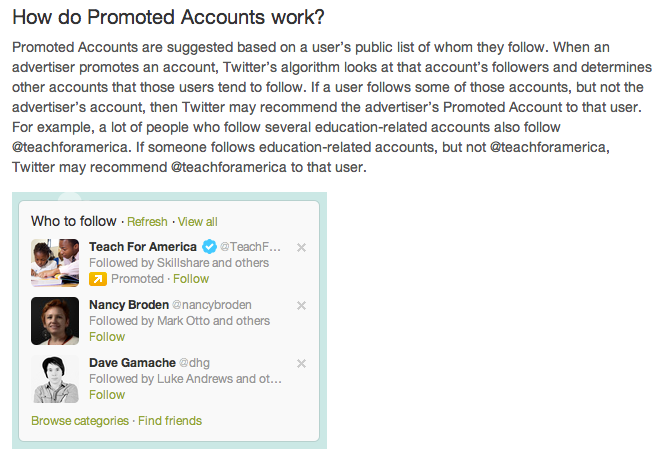 Why is this cheating? Because, whether you realize it or not, Twitter is a game. First some background:

In an early post I discussed the gamified state of Twitter, noting that through the use of engagement statistics and positive feedback loops Twitter further encourages interaction with the system:

By having its users engagement statistics publicly available, Twitter subtlety enables users to enter into a feedback loop with the service. Twitter does not separate out its gamification through leader boards or badges, rather, gamification is baked into the system itself.

Merely using Twitter may result in a user engaging in a self-perpetuating “game” / positive feedback loop. To help explain the concept for people unfamiliar with feedback loops, an illustration might be in order:

Player Action (User Action)
1)Player Action: A user sends out a Tweet (or Re-Tweets another users Tweet).
Simulation (System)
2a) BlackBox: This is the Twitter backend system.
2b) The Tweet is now in the System (a Token), wherein other users may either ignore, Re-Tweet, or reply directly to the user (State Change).
Synthesis and Filtering
3a) Feedback: The Twitter system communicates any state change back to the user.
3b) Useful/Useless info:

3c) Tools: New followers. The most powerful feedback Twitter can offer it’s users. When a user receives a new follower after a Tweet, it means that they have broadcasted information that a total stranger found compelling enough to follow the user’s future tweets. Thus giving the user a larger audience in which to broadcast information.

As such, the feeling of appreciation and sense of contribution generated from positive feedback, or the the feeling of neglect from no feedback both feed directly into the users next action in the system.

Later I discussed the psychology behind these systems, particularly their origins in game systems, and how it leads to the anticipation of being re-tweeted:

‘The brain is programmed, at a very fundamental level, to seek out surprising and unexpected rewards,’ says author Jonah Lehrer, who writes about neuropsychology in his book How We Decide and in publications such as The New Yorker and Wired. ‘One can see this phenomenon in action by looking at the response of dopamine neurons, which get much more ‘excited’ when exposed to an unexpected reward than when exposed to a reward they can predict in advance.’ Surprising pleasures, it turns out, are the most joyous of all because they highlight failures in our predictive predilections. It’s like the dopamine neurons were sitting up and yelling, ‘Hey! There’s something really good here! Let’s obsess over that until I can figure out why I didn’t see it coming!’

So after being conditioned by the feedback loops of social media services, when your finger hovers over your mouse, cursor floating above the “post” or “tweet” button, your brain is firing chemicals off left and right. Your lizard brain in deep anticipation mode. Will this be ignored? Will someone comment? Will I get new followers?

So we have a gamified social network, that encourages its users to anticipate deeper interaction with the system.

In gaming parlance, the method in which Twitter is functioning would be known as F2P or “free to play.” Anyone can use the system, but to get the elite bonuses and features, you have to pay for them:

Free-to-play refers to any video game or social or mobile application that has the option of allowing its players/users to play/download without paying. Since games using the concept are available at no cost to players, they use other means to gather revenue, such as charging money for certain in-game items (like powerful bonuses which are usually available for real money only) or integrating advertisements into the game. Free-to-play can be contrasted with pay-to-play, in which payment is required before using a service. Pay-to-play games usually offer equal gaming experience for all players while free-to-play games give advantage to premium players. Free-to-play games are similar to freemium, a more general term and a business model in which a product is offered free of charge while a micropayment is charged for users to access premium features and virtual goods.

Core gamers are well versed with the concept, with games ranging from Team Fortress 2 to The Lord of the Rings Online using the concept to great success. But as many people have only a  passing familiarity with core gamers, a more well known example is would be Farmville. Farmville is a classic F2P game whose purpose is not to be fun, but to encourage you to cheat the system. Players in Farmville, plant crops, raise animals, and tend to their farm. All these things take time and money. 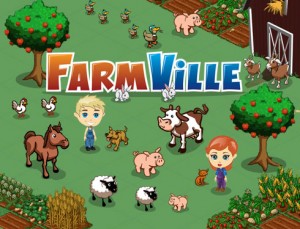 In Farmville, time moves rather slowly. You can’t just engage in activities again and again. Activities have “cool down” periods in which they need to re-charge before you can do them again. Your farm also earns money, which can then be used to purchase more farm equipment, crops, etc. But it earns money slowly. So players are forced to re-engage with the system again and again in order to make progress. This variable interval reinforcement ensures that you will keep coming back fro that dopamine drip. In gaming, this process is usually referred to as “grinding.”

Yet Farmville offers a way out of the grind, or rather, a means by which to fudge it a bit. Get ahead. Just pay $5 and you can get extra turns, better items, move things along more quickly. No need to grind.

Many people who have never played these games are now thinking, “why do people pay for that?” What they fail to realize is that Farmville is a deeply social experience built on top of Facebook. It uses social reciprocity and socially visible engagement statistics to encourage people to a non-stop race of keeping up with the Joneses. Farmville users want to be popular. And they’re willing to spend money to get there faster.

Starting to see where this is going? 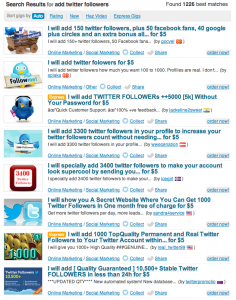 Cheating on Twitter has been rampant for some time. A quick search on Fiverr results in hundreds of offers to gain 10,000+ followers for only $5. These types of offers have been around for some time. Well before Twitter started offering advertising of their own. But what Twitter is offering isn’t really advertising, especially when looking at Twitter as a gamified system. An ad would merely sit on the side of the page on Twitter, which wouldn’t do much good as the majority of Twitter users don’t use the webpage. What Twitter is offering to its users is a buff (a temporary modification to a game character’s original set of stats that usually comes into play when special powers and abilities are used).

This isn’t advertising. Or rather, it’s advertising in some new form – an attempt at forcing viralization. Which just somehow seems insidious. It’s not an attempt to place something in front of us to look at. A commercial on TV, a billboard on the side of the road. Forcing viralization is attempting to force an advertisement to come out of your own mouth. Not something you see on the side of the road, but something you actively participate in regurgitating to others. It’s co-opting one of the most powerful forms of influence, social proof – the psychological phenomenon where people assume the actions of others in an attempt to reflect correct behavior for a given situation.

Oh your friend just re-tweeted something funny. So you re-tweet it, and so on down the line. But what no one down the line realize is that the alpha tweet was sponsored. Your friend unwittingly turned you into an amplifier for an ad. A mouthpiece for mindshare.

Which doesn’t really sound like that fun of a game to me.