Cicero on Conversation and Friendship 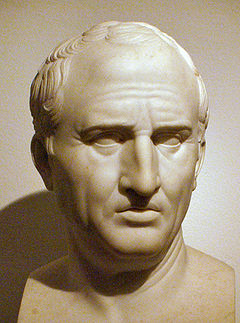 I had enrolled in The School of Life, an academy of “self-help” on Bloomsbury’s Marchmont Street, co-founded by philosopher Alain de Botton. For about £30 per session, students can take classes with resident “fellows” of the school on subjects such as “How to fill the God-shaped hole” or “How to make love last”. Tuesday’s topic was “How to have a conversation”.

Such is the topic of an article in the Financial Times this past week.

Has it really come to this? This wasn’t a clinical experience for those with social anxiety or psychological issues. It was the equivalent of going to a wine tasting.

A freelance television producer in her early forties, she was wearing a blue puffer dress covered in images of stars and planets. She was finding it hard to have meaningful relationships. Technology was partly to blame: “Sometimes you feel the BlackBerry is like a third person,” she said. This was a generational issue, too. Her nieces and nephews barely looked up from their gadgets when she entered a room. Another new acquaintance agreed, and described how Google had blocked off avenues of conversation with her boyfriend. “Before we would argue about this or that, but now we just look it up on Wikipedia,” she said.

Modern internet communication technology has enabled us to to live in a hyper-connected society – but it’s worthless if we can’t connect with those immediately around us. The knee-jerk reaction is to blame technology – “Oh it’s those blasted iPhones and the Googles!!” But as I’ve stated before, technology is just a tool.

Having an iPhone on hand doen’t automatically turn you into a introverted prick. Modern communication technology is a multiplier. It enhances and magnifies how we communicate. If you’re the type of person is self-involved – an iPhone is only going to make you more self-involved.

Is that really so difficult? Is there something there that is so monumentally difficult that people actually need assistance?

Interacting with other people is not about you. It’s a chance to interact, share, and grow from those around you. It’s an opportunity to learn. There is little in life as satisfying as a stimulating conversation among friends. As Cicero noted,

To begin with, how can life be worth living, to use the words of Ennius, which lacks that repose which is to be found in the mutual good will of a friend? What can be more delightful than to have some one to whom you can say everything with the same absolute confidence as to yourself? Is not prosperity robbed of half its value if you have no one to share your joy?

If your phone is such a problem – turn it off! Leave it at the house. Trash the phone if you have to. There’s nothing so important that you can’t devote a few uninterrupted hours with friends. But again, the phone is not the problem – it’s people’s lack of discipline or desire to know when to step away from it.

I spent this past St. Patrick’s Day like I always have for the past nine years – dawn to dusk at my local Irish bar with friends. Same group every year. But we were down a man as he’s in Afghanistan. He managed to get a phone call to us during the day (middle of the night for him) and let us know he was missing us. So what did we do? We spent the rest of the day taking pictures and video and emailing them to him and he responded as best he could. We used technology to reach out, connect, and have a conversation with a friend thousands of miles away from us because he couldn’t be there that day. Our day was better because we could share it with our friend – but not to the point that we ignored one another.

People don’t need a class on conversation. They just need the common sense to be a decent person, put other people first, and stick their ego in the back seat. Get that down and they’ll be have as many genuine, meaningful conversations as they’d like.