Flash Mob Riots: Crime in the Age of Twitter 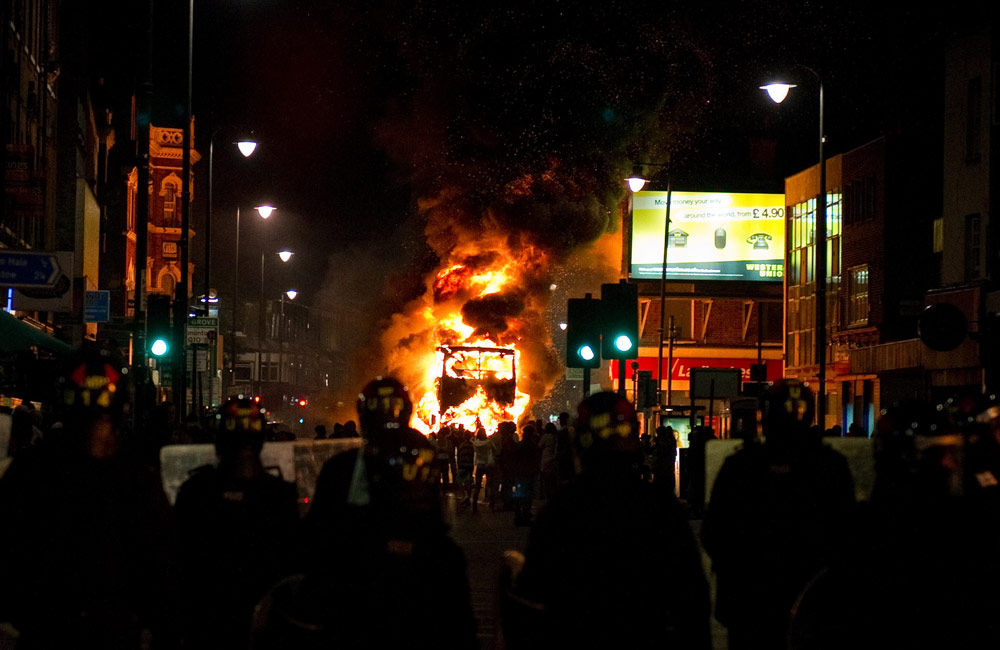 Crime, in the age of Twitter, comes to appear as a form of cartel – that needs busting.

– Will Davies, Research Fellow at Oxford University, in reference to the on-going riots in London.

Much has already been written about the role of social media in the riots in London, now on their third day. Publicity of the riots has spread on Twitter, Facebook, and other publicly open social media platforms. Meanwhile the organization of the riots seem to have taken place in the private platform of Blackberry Messenger (BBM). Blackberrys, being cheap and having a robust network in London are the mobile of choice for youth in London. By using the private network of BBM, rioters were able to quickly rally and organize outside of the purview of any authorities that might be monitoring publicly accessible social media.

One BBM broadcast sent on Sunday, which has been shown to the Guardian by multiple sources, calls on “everyone from all sides of London” to vandalise shops on Oxford street.

It said: “Everyone from all sides of London meet up at the heart of London (central) OXFORD CIRCUS!!, Bare SHOPS are gonna get smashed up so come get some (free stuff!!!) f**k the feds we will send them back with OUR riot! >:O Dead the ends and colour war for now so if you see a brother… SALUT! if you see a fed… SHOOT!”

A cartel usually refers to a tight organization based on a formal agreement among commercial enterprises with conflicting interests. Quite the opposite of what has seemingly been organized via social media. The London rioters are instead diverse groups of people loosely organized by ill will and real time updates. There is no formal agreement in place. Nor are they acting in any commercial fashion – unless agree with Davies argument that ” looting is a particularly aggressive form of shopping…”

Instead these riots are more akin to flash mobs. While the term “flash mob” has generally only be applied to irreverent acts of entertainment, flash mob riots are not without precedent. Philadelphia experienced a string of assaults and property destruction in 2010 that began with flash mobs:

In the past year, at least four of the flash mobs have broken out in the city, including one on Saturday in which roving teenagers broke into fights, several onlookers were injured and at least three people were arrested.

“It was like a tsunami of kids,” said Seth Kaufman, 20, a pizza deliveryman at Olympia II Pizza & Restaurant on South Street. He lifted his shirt to show gashes along his back and arm. He also had bruises on his forehead he said were from kicks and punches he suffered while trying to keep a rowdy crowd from entering the shop, where a fight was already under way.

But just as caring people organized after the riots in Vancouver following the city’s Stanley Cup loss earlier this year, the people of London have reacted to the flash mob riots just as quickly via social media. Immediately following the riots, the hashtag #riotcleanup exploded on Twitter. 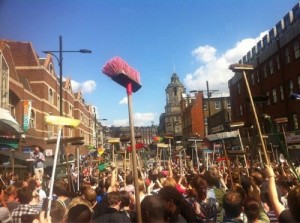 Following the link on the hashtag will bring up dozens of images of people in the streets, spontaneously lending a hand. Similarly, someone quickly set up Catch a Looter; urging people to report people to the authorities. Again, similar to the reaction to the Vancouver riots just months ago.

Despite the media’s desire to spin and classify social media as some unique agent of change in society – it’s just a tool. No different than a hammer. You can destroy a storefront with a a hammer – but you can rebuild it too. What matters is the hand that wields it.