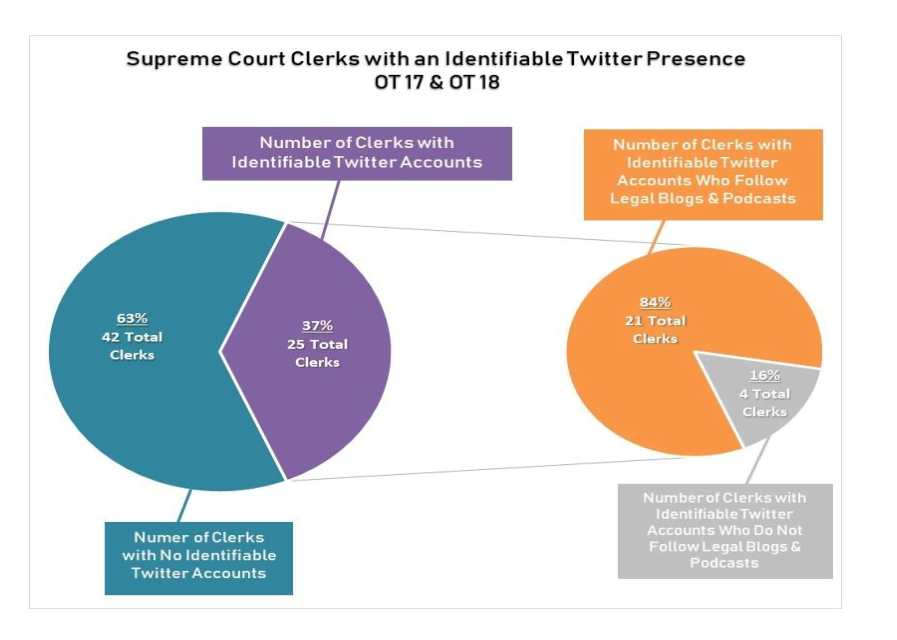 The Supreme Court of the United States (SCOTUS) is often seen as the land of philosopher kings. A handful of lawyers, educated in the same institutions, following a set path to donning the robes, cloistered above the legal system of the United States, doling out judgement from a perch removed from the rest of society.

And as rare and difficult as it is to become a SCOTUS Justice, it’s also quite difficult to argue and influence the justices. The SCOTUS Bar, while technically open to all lawyers, the number of lawyers who appear in from of SCOTUS with any regularity is small. As a SCOTUS appearance is the final measure of justice, clients almost always choose advocates with experience.

As such, only a handful of people ever deliver briefs or make arguments before the Court. And while a number of individuals and organizations routinely file amicus curiae in a bid to influence the direction of the Court in regards to a particular case, those that actually make it before the Court are slim. Through tradition, rules of practice, and exclusive access, the ability to influence SCOTUS is limited.

But the Internet has introduced a backdoor.

There has been speculation about the influence of the online legal commentary for some time1 See Lee, Rachel C. (April 2009). “Ex Parte Blogging: The Legal Ethics of Supreme Court Advocacy in the Internet Era” (PDF). Stanford Law Review.. But it’s a tough thing to measure. Lawyers have had blogs (and temporarily blawgs, yuck) for some time, but it’s difficult to link a lawyers blog commentary to influence on a SCOTUS opinion. Sure, you can show that a lawyer has written about a lawsuit, but there was never a way to show a connection between a blog and the Court.

Yet, a new law review article2yep, I’m still reading them even if no one else is. And other folks are not reading them with good reason, most law review articles are garbage. from Jeffrey L. Fisher & Allison Orr Larsen has done just that. Virtual Briefing at the Supreme Court 3 (May 14, 2019). 109 Cornell Law Review (2019, Forthcoming). Available at SSRN: https://ssrn.com/abstract=3388080 delves into the influence of online legal commentary and SCOTUS.

…publicly available records demonstrate that current Supreme Court law clerks are following these commentators, bloggers and podcast hosts on Twitter. Justice Kennedy, in fact, candidly said that he asked his law clerks to read the relevant blogs once the Court grants cert on a case.

The authors make a review of a number of SCOTUS lawsuits and the blog posts and podcasts produced at the same time as they were being argued. And while there is speculation that these posts may have reached SCOTUS in some manner, it is almost impossible to prove.

But the social media platform most preferred by lawyers, Twitter, makes it possible to draw a direct line between online commentary and the halls of SCOTUS – particularly, their clerks.

It is impossible to know in exact detail the number of SCOTUS law clerks on Twitter because many are likely anonymous. But Fisher & Larsen were about to find a fair number of clerks with identifiable Twitter accounts.

a surprising number were active on Twitter during the time they clerked at the Court—25 law clerks (out of 67 total law clerks for the two Terms, so 37 percent) had Twitter accounts we could verify. And, out of those 25 identifiable law clerk twitter accounts, 21 of them (84 percent) follow legal podcasts, blogs, and other sources of “virtual briefing” at the Court.

Using Twitter’s following/followers metrics Fisher & Larsen were also able to determine the most popular legal commentators among the clerks.4 LOL at Ian Samuel 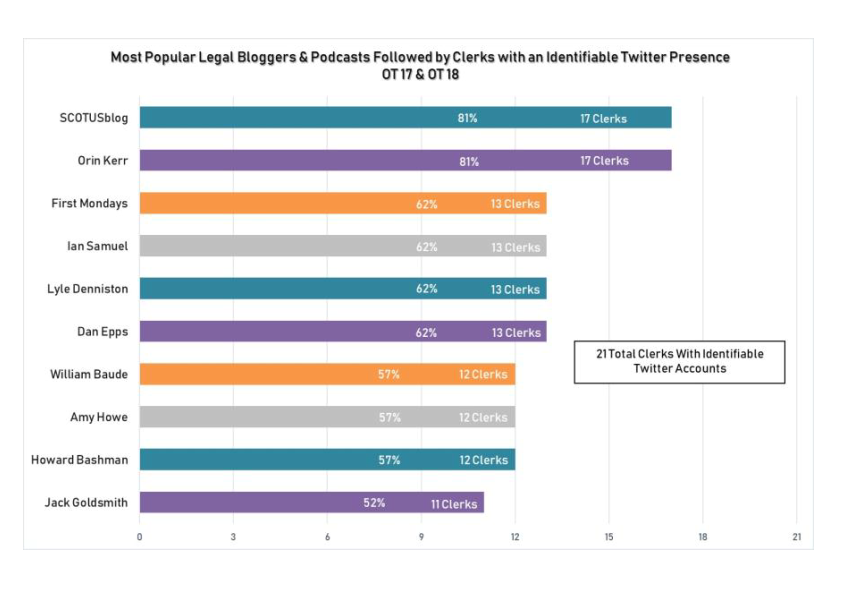 Of course, merely following someone doesn’t indicate influence. Yet,

One law clerk, for example (whose name and chambers we will protect) began to follow Al Jazeera News, Checkpoint (military blog), and Yemen Updates all while the Court was actively considering the travel ban case, Trump v. Hawaii, and concerned about the specific allegation in Yemen that the waivers for “hardship” were not really being used. Another law clerk started following “On Labor Blog”—a blog devoted to “workers, unions, and politics”—right around the time Janus v. AFSCME, the public unions case, was briefed and argued.

So it would seem that there is a more than passing connection between the news law clerks follow and their work and behavior at the Court. If you have an even passing desire to stay informed (and possibly influence) the Supreme Court – you need to be on Twitter.

Fisher & Larsen spend some time in their paper exploring what this means for the Court – and if it should even be allowed. I won’t re-hash their work, you can read it yourself if you’re interested. But the takeaway should be that it has never been easier to have some sort of subtle, backdoor influence on SCOTUS.

Welcome to the future.

And if you want to chat about SCOTUS, politics, lawsuits, or just how annoying OC is without people looking over your shoulder….