This past week there was a fair bit of noise as to whether Bitcoin is legal money or not, spurred on by Florida v. Espinoza, a recent case in Miami, Florida. This pithy line struck a chord with many:

The court is not an expert in economics; however, it is very clear, even to someone with limited knowledge in the area, the Bitcoin has a long way to go before it the equivalent of money.

Ouch. Tough to hear for proponents of virtual currencies. But is Judge Poole’s opinion actually relevant to the Bitcoin’s status as legal money?

But before we jump into a discussion on that topic, let’s briefly address:

I could try and type out some lengthy description of exactly what Bitcoin is and why it’s significant, or you could just watch these two brief videos (5 minutes each).

These two videos should get you up to speed on exactly what Bitcoin is, how it works, and why it’s important. If you really want to go deeper, you can checkout this Lawyerist Podcast with Marco Santori, a lawyer who specializes in virtual currencies.

Now we have a basic familiarity with Bitcoin. But to understand Judge Poole’s opinion (PDF) in context, we need to understand:

What Is Judicial Precedent? 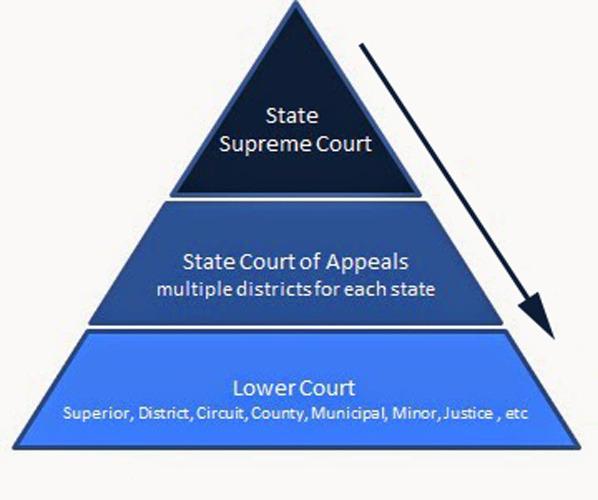 The United States legal system is a common law system. It is built upon by case law developed by judges, courts, and similar tribunals. Judicial opinions in each case have the potential to establish precedent for cases that follow it. It’s also a hierarchical system. The opinions of higher courts must be followed by those of lower courts. Further, State courts must also follow the opinions of their respective Federal Circuits and other superior Federal courts.

The higher the court, the more significant and important (precedential), it’s opinions are. 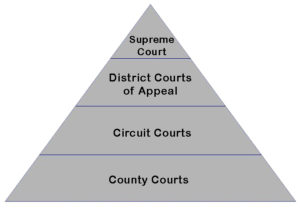 Florida’s court structure is similar to the pyramid above. The Espinoza trial took place in a state criminal circuit court, the second lowest tier of courts in Florida. Again, it’s also a state court, not a part of the larger Federal system.

All that’s to say the Espinoza opinion is precedential on two things:

What do Federal Circuit courts, the ones that usually establish binding precedent, have to say about Bitcoin’s status as legal money?

Finally, with respect to Count Four, the defendant alleges that he cannot have engaged in money laundering because all transactions occurred through the use of Bitcoin and thus there was therefore no legally cognizable “financial transaction.” The Court disagrees. Bitcoins carry value—that is their purpose and function—and act as a medium of exchange. Bitcoins may be exchanged for legal tender, be it U.S. dollars, Euros, or some other currency.

Bitcoin clearly qualifies as “money” or “funds” under these plain meaning definitions. Bitcoin can be easily purchased in exchange for ordinary currency, acts as a denominator of value, and is used to conduct financial transactions. See, e.g., SEC v. Shavers, 2013 WL 4028182, (E.D.Tex. Aug. 6, 2013)

It is clear that Bitcoin can be used as money. It can be used to purchase goods or services, and as Shavers stated, used to pay for individual living expenses. The only limitation of Bitcoin is that it is limited to those places that accept it as currency. However, it can also be exchanged for conventional currencies, such as the U.S. dollar, Euro, Yen, and Yuan. Therefore, Bitcoin is a currency or form of money, and investors wishing to invest in BTCST provided an investment of money.

Given that three separate Federal Circuits have already described Bitcoin as money, the Espinoza opinion is not actually that important.

Statutes, Codes, and Other Regulatory Opinions

With that being said, there are other factors aside from the court system that have an impact on Bitcoin’s legal status as money.

As noted by “Taxgirl” Kelly Herb at Forbes, the IRS decided that Bitcoin was a “convertible” currency to be treated as a capital asset.

This is in line with a 2013 opinion letter from the United States Department of the Treasury, Financial Crimes Enforcement Network (PDF):

And in September 2015, the United States Commodities Futures Trading Commission held that Bitcoin is a commodity for the purpose of regulation (PDF).

Section 1a(9) of the Act defines “commodity” to include, among other things, “all services, rights, and interests in which contracts for future delivery are presently or in the future dealt in.” 7 U.S.C. § 1a(9). The definition of a “commodity” is broad. See, e.g., Board of Trade of City of Chicago v. SEC, 677 F. 2d 1137, 1142 (7th Cir. 1982). Bitcoin and other virtual currencies are encompassed in the definition and properly defined as commodities.

As Bitcoin is new and evolving, I expect that a variety of other U.S. regulatory agencies, as well Congress, will continue to bounce around Bitcoin’s exact legal status.

This discussion is also limited to the United States. Other countries’ regulatory bodies have differing opinions on Bitcoin’s status as legal money. The website BitLegal has an interactive map you can use to explore the legal status of Bitcoin in various countries. You can also find a frequently updated spreadsheet on Bitcoin legal status per country at Wikipedia.

So Is Bitcoin Legal Money?

But three separate federal opinions say it is. Yet even with those cases as established precedent, it’s probably going to take either some hard and fast regulations or further guidance from higher courts before people feel comfortable. Regardless, I wouldn’t be sweating the opinion of a circuit criminal court in Florida, unless you’re actually in that jurisdiction.

If you found this description of Bitcoin unsatisfying, think about how much more disappointed you could be if you bought my book on what it’s like to be a new lawyer.