Patrick Zarrelli Attempts To Blackmail Me

I was going about my morning internet routine, reading news, checking email, Twitter and the like. I usually swing by Reddit as well, but it was down this morning so I skipped it. I came back to it later and I noticed that I had a private message in my account. Nothing too out of the ordinary. But when I opened it, it was from none other than Patrick Zarrelli! You may not have heard of him. Or it may have been awhile so I’ll help you refresh your memory:

In the aftermath, Zarrelli seemingly went into hiding. Like a dog whose bark was much bigger than its bite, he tucked tail and ran. I hadn’t given him any thought until I received this message: 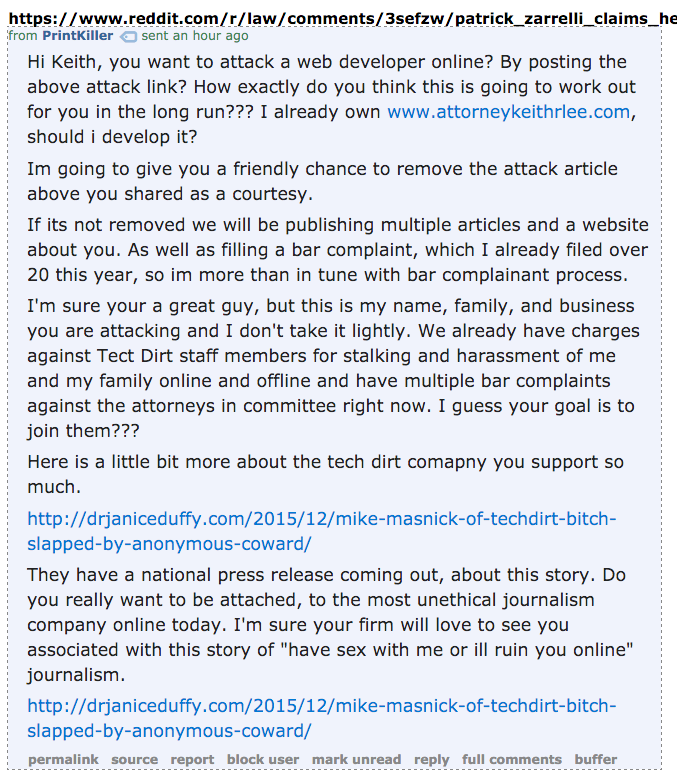 The article in question I had submitted to r/Law was from TechDirt, about Zarrelli’s supposed “criminal charges.”  This was from two months ago. No one was giving it any thought or consideration. Except Zarrelli.

I suppose Zarrelli thought he could intimidate me into pulling the link down? Threaten to develop a website about me where “there will be multiple articles about me?!” There are charges out there!?!! Bar Complaints!!! OHHH NOOO!!!!!

I don’t want to drag this out too long because a) dealing with dipshits like this guy violates Bennett’s Rule #1, and 2) I’ve got a lunch appointment.

File your bar complaints. They’ll fall apart and do as little as the ones you filed against everyone else. File more “criminal charges,” they’ll be dismissed like they were last time. Make a big, scary website about me! We can all see how that went when you tried it with everyone else. We all laughed it off and made fun of you.

Patrick Zarrelli, you are a parasite. Attempting to suck away the life from others. Maybe you can intimidate, bluster, and threaten some weak and unknowing people, but I ain’t one of them. In case it hasn’t gotten through your thick skull at this point, threatening lawyers is like wrestling a pig in the mud. Throwing Rabbit in the Briar patch. We don’t give a shit and we actually like it.

So develop away! Just be ready for the consequences.

I sent a link to this post in reply to Zarrelli’s message. He responded:

TIL – Threatening people with blackmail is a courtesy! Who knew!

Going to do a live webinar/broadcast about this incident and managing online reputations next week. Details here.