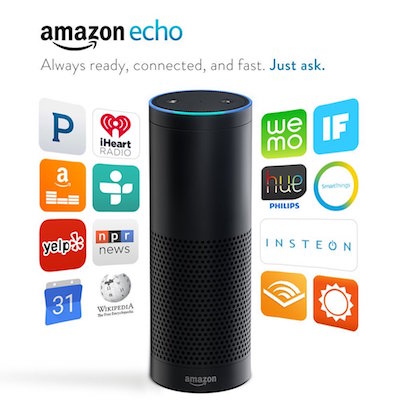 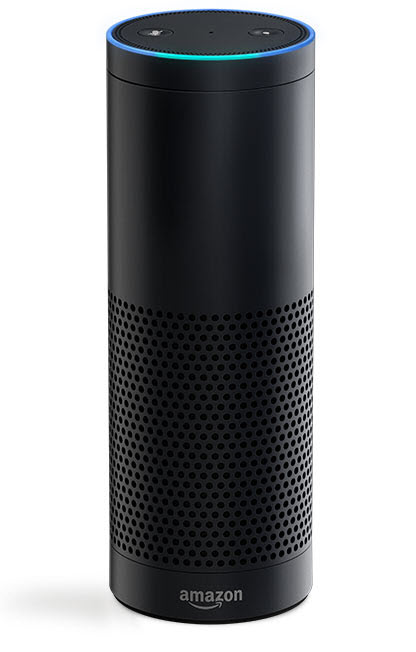 For Christmas, I received an Amazon Echo. It’s a little plastic cylinder made by Amazon, with a speaker and some microphones in it. At 9 inches tall and 3 inches wide, it’s unobtrusive. It’s meant to be placed somewhere central in your home. After that, you’re never meant to touch it again.

The Echo is connected to Amazon’s vast array of services and works exclusively by voice command. Just say: “Alexa,” the action word the Echo recognizes, then give it a command. After having used it for nearly a month now, it seamlessly worked itself into my daily routine. The Echo achieved what Amazon wants and expects: I rely on the Echo for a great deal in everyday life.

I wake up first in our home. Far earlier than my wife or our son. Before dawn, I walk softly from the back of the house to the kitchen.

Keith: “Alexa tell me the news.”

Alexa rattles off news from NPR and the BBC (a dozen news options are available to choose from). Then she tells me the weather for the day, while I’m preparing coffee. I make a French Press everyday because I’m not some heathen drinking drip coffee. I set the kettle to bring the water to 200 degrees.

I rummage around in the pantry and refrigerator for breakfast. It’s Saturday, which usually means “pancake day” to my son. I start getting everything together. The kettle dings. I pour water into my French Press.

She goes back to playing Bach. In five minutes, an alarm will go off. Then she’ll continue playing Bach while I press the plunger into my French Press. Eventually everyone else in the house wakes up. We eat breakfast. If it was a weekday, we’d ask Alexa what traffic was like. She’d tell us how long it would take for my wife or I to get to work. Because Alexa knows where we work. She knows a lot of things about us really.

What type of music we listen to. The average time we wake up. What we search for. It knows when meetings are scheduled on my calendar. Right now, Alexa likely thinks we’re horrible at math. My 6 year old son loves running into the kitchen:

Gales of laughter follow. It doesn’t balk at his high-pitched voice or sometimes mispronounced words. It just recognizes things and moves on.

Day after day, you come to rely on the Echo. More than any other computing device with voice command I’ve used. Apple’s Siri pales in comparison. For one, the Amazon Echo seems to work every time I use it. In the hundreds of commands I have given it, it has only not recognized something a handful of times. And as opposed to a phone, it’s just sitting there, ambiently listening all the time. It becomes part of your home.

It also changed how I think about and interact with my home. The other day I cooking dinner, moving about the kitchen. I think I was making pizza. I pulled it out of the oven and brought everything to the table. Ready to sit down to eat, I noticed I forgot to turn the oven off. I opened my mouth, the words “Alexa, turn off the oven,” already formed in my mind.

I stopped myself before the words could come out. It was an odd moment. The Echo is so firmly ingrained in my daily use that I’ve come to expect other items in my home to be responsive. If that’s not a testament to its success, I don’t know what is.

Alexa can do much more of course. Tell you facts from Wikipedia. Tell you the schedule of your favorite sports team. Read events from your calendar.

Keith: “Alexa, who is the governor of Florida?”

Alexa: “The political leader of Florida is Richard Lynn Scott.”

I wish they would change that one. The “political leader” thing weirds me out a bit.

The Echo’s functionality is constantly expanding as well. As I said in the beginning, it’s just a dumb plastic cylinder with a speaker and some microphones. Its seemingly magical properties are actually being done in “the cloud.” New services are being added all the time. Recently, the ability to read Kindle books was added. Buy a Kindle book, read 20 pages. Next time you’re around your Echo, say “Alexa, read my book,” and she’ll pick up right where you left off using Amazon’s Whispersync tech.

But the biggest, not surprise really – adjustment, realization, epiphany? Came late in the evening while I was in the kitchen making tea. It’s Winter and cold. Well, cold for the South. The week prior, I ordered a small space heater for my home office. Whatever TheWirecutter recommended because that’s just how I buy things like that these days. Anyway, I had been considering ordering another one. For a bedroom or just to have around. I paused.

Alexa: “Okay, it’s ordered. You can track your purchase in the Alexa app.”

It was on my doorstep two days later. The experience was a bit surreal.

But that’s technology for you. It’s changing and evolving so fast that it can be difficult to keep up. Right now I can speak to the air and some distant computer will tell me about the traffic, weather, or news. It can play me almost any song I want, tell me any fact I want, do any math I want. It can have almost anything I want to buy on my doorstep within two days. All I have to do is ask.

Being part of the last generation to remember what it was like before the Internet, it still seems amazing. To my son, it’s nothing special. For my son, Alexa is there for math and to play “Everything Is Awesome” on demand. She’s a fun thing to have in the house, nothing out of the ordinary. And the Echo is not the Echo, nor an it. She is Alexa.