No Navigator, No Parachute, No Problem: An In-Depth Look at Flying Solo 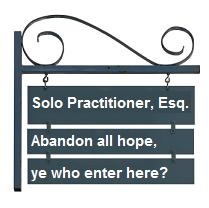 I graduated from University of Florida College of Law in 2011, and like most of my classmates, I already had my entire career planned out: I would work as an associate for a few years at a small-to-moderate sized firm, climbing my way up the ladder as I built up my knowledge base, contacts and book of business. After a few years, I would leave to open my own firm and use the experience (and clients) I brought over from my time at the firm to make it an instant success.

Life threw a few dozen curveballs my way, and I wound up working as a law clerk for two years before taking and passing the bar exam.  My boss then told me that he wasn’t interested in hiring an associate, leaving me to become the only attorney I’ve ever known to be fired for passing the bar exam. I remembered my dream of someday owning my own practice, but I immediately dismissed that thought. After all, I didn’t have years of experience, I wasn’t a member of the area’s Legal Good Ol’ Boys Club and my book of business was less “War and Peace” and more “Famous Jewish NBA Legends.” There’s no way I was prepared to be a solo attorney, and if I tried, I’d crash and burn for sure.

My wife and I talked it over, and after a lot of discussion and soul-searching I realized that if I didn’t go out on my own now, I wouldn’t get another chance to do it until 20 years down the road after our imaginary kids were heading to college. The decision was made: I was going to hang my shingle.

As part of my preparation, I started combing the Internet for any and all information I could find about starting a firm. I was looking for hard data: what are the costs involved in starting a firm, how much do new solos bring in, what works and what doesn’t when you’re starting out, and so on.  Unfortunately, there was almost nothing like that. Instead, nearly everything I found fell into one of two very unhelpful categories: One was the “LAW SCHOOL IS A SCAM!  BURN YOUR J.D.!  YOU’LL NEVER MAKE IT!” crowd which has taken over many popular law blogs and message boards.  The other was very basic, generalized stuff like “Network, do good work and if you make it through your first year, you’ll probably be okay.” Neither was much help.

One exception to this came from Greg Doucette, a North Carolina attorney whose blog I stumbled across one day. Greg did something I hadn’t seen any other attorney, new or established do: he put up a one year “postmortem” of his new firm with hard numbers, showing exactly what he made and spent, along with examples of what he did wrong (and right!) that first year and the changes he planned to make going forward.  This information was just what I was looking for, and was much more helpful than pretty much anything I had found before.

Fast forward a few months, and I’ve just finished my first three months as a solo attorney and am in a position to do for others what Greg did for me: provide some hard numbers and talk about the mistakes I’ve made so far, in an effort to give new and prospective solos an idea of what this experience is really like. My next post will detail my first quarter, then I’ll continue every month with a new update. Follow along, and fire away with any questions, comments or hate-filled mockery you might have. Also, please make sure your seat backs and tray tables are in their full upright positions; if there’s one thing I’ve found so far, it’s that you can’t fly solo without occasional turbulence.