Anticipating The Future Of Law 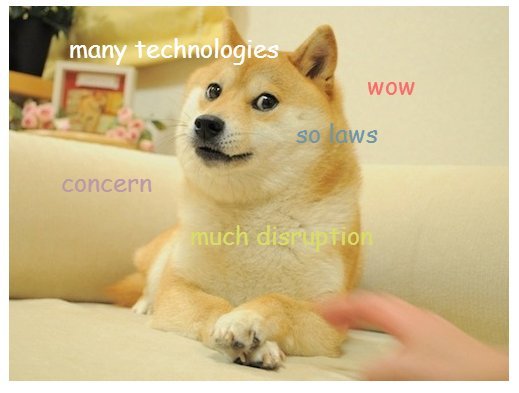 If you’re a lawyer who spends any amount of time online, you’ll soon discover that the “future of law” has become a cottage industry unto itself. There are professors, pundits, lawyers-turned-consultants, all peddling their version of the future of the legal industry. There is also a new start-up every 3 months that swears up and down that they are going to disrupt the legal industry, only to never be heard from a year later.

The reason for doing so is often that many of these people have skin in the game. They want to offer consulting services to firms, or sell their iToy, or license their software as a service. They want to be seen as prognosticators and predictors of the future so you will give them cash. Their pitches are often tied into the notion of “disrupting” some aspect of law practice.

Last week over at Lawyerist, Sam Glover, put up a post entitled The Practice of Law Does Not Need To Be Disrupted, that highlighted the growing absurdity over the use of the word “disrupted:”

Setting aside the question of whether or not it is a good idea to disrupt (or reinvent, if you like) the legal industry, the law is impressively resistant to disruption. I do not mean that lawyers themselves resist disruption (though many do), but that the practice of law itself is difficult to disrupt.

There are many reasons for this. The practice of law is regulated, making it difficult for non-lawyers to provide legal services without breaking the law. And every jurisdiction is regulated differently, meaning a disruption in one state may not spread across the border. Those regulations are mostly well-intentioned, too, structured to protect consumers (even if they sometimes seem not to be doing a particularly good job of it).

In law practice, experience often matters more than brilliance. So does reputation, which, combined with experience, can lead to faster and better resolutions of legal problems than any software we can imagine. An app cannot replicate those things.

Law practice is also, at heart, a personal-service industry. (Nobody talks about disrupting the massage industry — at least not that I have ever heard of.)

And Scott Greenfield offered his thoughts on disruption as well over at Simple Justice:

Yes, the word “disruption” has been used to the point of rendering it meaningless marketing fluff. Sure, most new law start-ups are lame ideas in search of a problem.  It’s absolutely rare that a new thing can be dropped into the middle of law and change everything.  Law has been remarkably resilient for eons in rejecting change, not because (as the haters claim) lawyers are just averse to change, but because we all bought Beta Max when it came out, and we’re now stuck with a useless machine…

So is there disruption?  You bet there is.  Are you disruptive?  Not very likely. Disruption is a rare event, and it should be.  Evolution, on the other hand, is and always has been constantly happening.  Will your new start-up succeed? How should I know?  Chances are poor, mostly because your idea is based on some child-like vision of cooliosity rather than utility, or you delude yourself by praying at the altar of reinvention, but that doesn’t mean you won’t somehow come up with an idea that catches fire.

To me, this strikes at the heart of the matter – most ideas just aren’t that good. Sure, on occasion there will be technologies or devices that are introduced that can instigate massive change across the industry, but they are few and far between. Instead, the legal industry will go on evolving in small, incremental changes as it has done for hundreds of years.

Prediction Of Future Events Is Futile

In his book, Managing For Results (affiliate link), famed management thinker Peter Drucker posited that the starting point, “know the future,” can be approached from two complementary approaches:

Most of the legal prognosticators seem to be fixated on latter option, making the future happen. The futurists are enamoured with the large forces in the technology world and want to imagine themselves in the image of Google, social media, etc. But very few companies have the impact of Google or Facebook. Most technology companies are small things. They identify a “a discontinuity in the economy and society and its full impact” and iterate on a product that helps solve a specific problem that a segment of the population faces on a regular basis. This is what legal technology companies should be focusing on. But instead most of these companies are offering “a solution in search of a problem” as Sam noted. They should instead be focusing on problems real, practicing lawyers have.

In the meantime, as I said in my comment over at Lawyerist: