Keiko: To Meditate Upon The Old 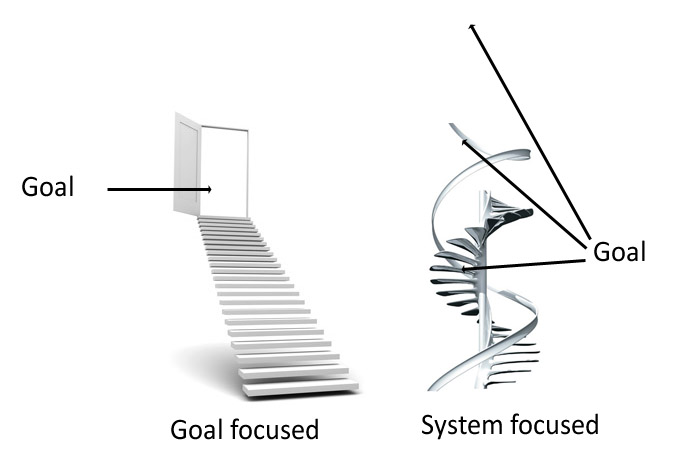 A couple weeks ago, I made a post entitled Goal Are For Losers, commenting on Scott Adams’ essay in the Wall Street Journal, Scott Adams’ Secret of Success: Failure, in which Adams posits:

To put it bluntly, goals are for losers. That’s literally true most of the time. For example, if your goal is to lose 10 pounds, you will spend every moment until you reach the goal—if you reach it at all—feeling as if you were short of your goal. In other words, goal-oriented people exist in a state of nearly continuous failure that they hope will be temporary.

If you achieve your goal, you celebrate and feel terrific, but only until you realize that you just lost the thing that gave you purpose and direction. Your options are to feel empty and useless, perhaps enjoying the spoils of your success until they bore you, or to set new goals and re-enter the cycle of permanent pre-success failure.

I went on to describe how I agreed and my focus on systems in my life. A couple days ago, Alex Craigie made a post critical of my statements, entitled A System Without A Goal Is Not A Good System:

What is a system without a goal? It’s just an exercise. We wouldn’t “consistently write and receive feedback,” as Lee suggests, for the sake of writing and receiving feedback. We use this system to help reach the GOAL of becoming a better writer. If you were going to take time out of your otherwise busy life to “set up an informal meeting/group devoted to affording . . . the opportunity to engage in oral arguments and receive feedback,” you would do so in order to reach the GOAL of becoming a better oral advocate. (Brief aside: don’t bother “setting up” any such thing, just join Toastmasters.)

There are perpetual students who obtain multiple degrees and never really leave school. But they have a system–just no goal. Goals are the key to success, as the authors’ own success aptly–but perhaps unwillingly–illustrate.

The key here is not to abandon goal-setting. Rather, once you set a goal, develop a system to reach that goal. And be flexible about adjusting that goal if it begins to seem unrealistic or you suffer a major set back, which is reasonably likely.

On the other side of the coin, when you achieve a goal, don’t spiral into depression, feeling “empty and useless, perhaps enjoying the spoils of your success until they bore you.” Set a new goal! Reach higher and farther.

Which is fair criticism. I was being somewhat hyperbolic with my statement that “goals are for losers” (and I think Adams was as well), but I stand by my opinion that people would be much better off if they focused on systems instead of goals.

I often come back to the training structure, methodology, and practice of martial arts when thinking about, well, everything really. Life, the universe, etc. In particular the focus on training for the sake of training. In Japanese martial arts, training is referred to as keiko. Which is distinct from exercising or playing a game (taiso – “conditioning”).

Keiko is an interesting word. If you were to ask a Japanese speaker what it means, you would likely be told that it means “a process.” But if you delve into the kanji, you get something a bit different.

The kei of keiko, written at the top, is a kanji rarely used today; it means “to cogitate,” “to think,” or “to consider.” Ko, brushed at the bottom of the word, is written with the numeral “ten” atop a “mouth.” Ko is the spoken wisdom of ten generations, that is, “old.”

Keiko means “to meditate upon the old.”

So to train in martial arts is not to have a goal (“I’m going to get my black belt”) but rather to be immersed in a system far larger than oneself. To be a part of a larger tradition. To study, learn, and integrate it into yourself. Hopefully, with enough dedication and practice, you might be able to put a bit of yourself into the art.

Here’s a secret that most people don’t know about martial arts as practiced in United States. The majority of people who attain the rank of shodan (1st degree black belt) – quit. The statistics that get bandied about are usually that 10% of people who begin training martial arts get to shodan, and then only 10% attain the rank of nidan (2nd degree black belt).

People become attached to the goal. Once it’s obtained, they lose interest because the place emphasis on external validation (“I got my black belt”), instead of personal development. They are goal focused instead of systems focused. The purpose of martial arts is not to obtain ranks but to cultivate oneself – mentally, physically – into a better person. Ranks are things to be achieved, but not become attached to.

If you focus on goals, you limit growth because you are having to constantly rebuild your system from scratch. It’s why so many people bounce from fad diet to fad diet. They start the newest diet fad craze – the watermelon sriracha diet – manage to lose 10 pounds then quit the diet and go back to eating like they were before. Four months later they’ve gained the weight back and start searching for another fad diet.

If instead people focused on a diet as it’s original meaning – from Greek diaita, originally “way of life, regimen” – they would lose weight and keep it off because they need to adopt a lifestyle that supports moderate eating and regular exercise. The “goal” of losing weight disappears and instead a system of healthy living takes its place.

That’s why I emphasize being systems focused. Not because I don’t have goals – but because I have so many goals that I need a reliable way to continually achieve them. I’m happy to achieve goals. They are helpful motivators. Become a lawyer, start a blog, write a book, run a marathon, etc.

But in the end, if my overriding purpose is to continually to improve myself as human being, then goals are merely milestones that denote a successful system.