A Judge’s Mind or 5 Cognitive Illusions of Judges 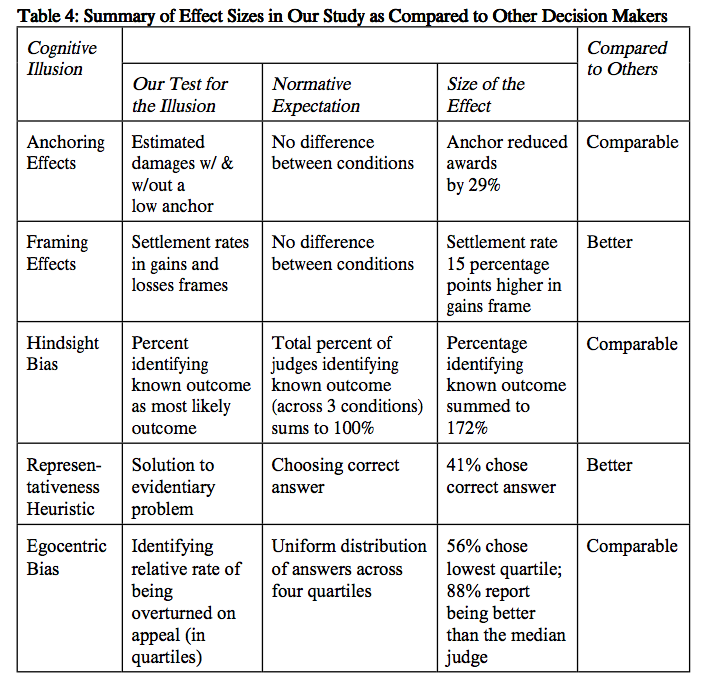 I recently got around to reading a whopper of an old law review article that I had been wanting to read for awhile entitled, “Inside the Judicial Mind.” From the introduction:

…we conducted an empirical study to determine whether five common cognitive illusions would influence decision making of a sample of 167 federal magistrate judges. These five illusions are:

We found that each of these cognitive illusions influenced the decision-making processes of the judges in our study…In short, our study provides empirical support for [the] assertion that when all is said and done, we must face the fact that judges are human.

Essentially, the study looked what common heuristics Judges might be caring over onto the bench. Theoretically, Judges would approach each case in a state of tabula rasa – but we all know this isn’t the case.

Of particular note is that judges do actually score better than other experts and laypeople in two of the cognitive tests.

Why Does This Matter?

Heuristic methods are short cuts. They are used subconsciously by our brains in order to speed up the decision making process. They are the basis of Gladwell’s Blink: The Power of Thinking Without Thinking. Useful in setting where you need to make a authenticity regarding a statute – but not so useful when weighing the authenticity of evidence. As the study notes,

Judges obviously can use the resources they have to obtain better research and background information to inform their decisions, but their time and resources are not infinite.

And by all accounts, judges are being asked to do more and more with less time and a smaller budget. Just last year in Alabama, the courts in the largest city in the state were almost completely shut down due to budget concerns:

Recent budget cuts have affected courts in nearly two-thirds of the states, but the impact may end up being most severe in Jefferson County, officials said.

Layoffs of security personnel due to recent state and county budget cuts has led Jefferson County court officials to say they will close public access to two, and possibly three, of the county’s five courthouses…until adequate protection can be provided at them.

At some point, you’re cutting budgets to the bone and there is nothing left except overwhelmed courts. In this environment, think it is more likely that judges are going to approach each case tabula rasa or fall back on heuristics when they look at the overflowing docket?

And the problem isn’t limited to Alabama. Type “your state” + “budget cuts affecting courts” and look at the number of articles since the Great Recession hit noting the effect of budget cuts on state court systems. At some point, the judicial system is going to be overwhelmed. We can’t keep asking more and more of the courts while giving them less and less.

Outside of properly funding the court system and ensuring that there are enough judges to properly handle all the cases coming into the system, lawyers would be wise to familiarize themselves with the three heuristics that judges fair no better on than laypeople. They can have a massive impact on the decision making process. For example, the study’s anchoring example found the following:

Suppose that you are presiding over a personal injury lawsuit that is in federal court based on diversity jurisdiction. The defendant is a major company in the package delivery business. The plaintiff was badly injured after being struck by one of the defendant’s trucks when its brakes failed at a traffic light. Subsequent investigations revealed that the braking system on the truck was faulty, and that the truck had not been properly maintained by the defendant. The plaintiff was hospitalized for several months, and has been in a wheelchair ever since, unable to use his legs. He had been earning a good living as a free-lance electrician and had built up a steady base of loyal customers. The plaintiff has requested damages for lost wages, hospitalization, and pain and suffering, but has not specified an amount. Both parties have waived their rights to a jury trial.

A simple, completely meritless Motion To Dismiss resulted in a nearly half million dollar difference in award from the judges. All because the $75,000 jurisdictional minimum for a diversity had been introduced which “anchored” the judge to a lower valuation.

The other examples from the study are just as pronounced, I’d suggest you take the time to read them.

Regardless, lawyers who are going to be presenting matters before judges need to take the time to properly frame any written or oral material they intend to be read or heard by a judge in order to minimize the judge’s reliance on heuristics and help the judge focus on the matter at hand as a unique situation that requires full consideration and examination.