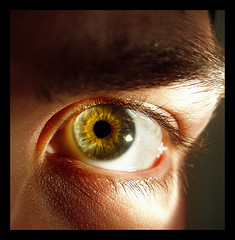 Scott Greenfield has a post today entitled Eyeballs Without Purpose. An excerpt:

I had a nice chat the other day with a young lawyer who has a very popular legal website. His site is a business, intended for profit and designed to maximize the number of eyeballs its draws. He was disgusted, well, concerned (actually, I was disgusted, so I’m projecting my own feelings about his website onto him. He didn’t hate his website anywhere near as much as I did), that in the zeal to create the website and draw the eyeballs, he might have lost a critical ingredient. Purpose.

If you ask most people who blog, they tell you they want to be relevant and meaningful. They just don’t want to risk losing the love of readers. After all, what good is being meaningful if no one reads what you write, and so they put their efforts into trying to collect eyeballs, as if a day will come when they will have enough, sufficiently own them that they can then, finally, offer a real contribution to thought. They’re still waiting for that day to come, but it never does.

So the young lawyer with whom I chatted asked me what I thought he could do to improve the quality of the content on his website. His actual words were, “what can I do to not suck?” I offered him a few suggestions, including that he make certain that the articles/posts that appeared not make anyone stupider for having read them. This was a major problem for him.

But more importantly, he had things to say, things he had learned between his third year of practice, when he knew everything there was to know about the law, and his eighth year, when he recognized how much he still had to learn. He was aching to get these things out, to tell others what he had learned. But he was afraid that he would offend his readers by telling them they were ugly and dressed funny, and they would run away from him and never come back. He would lose their eyeballs.

But you’re better off just going and reading the whole thing. It got me thinking about when I started blogging, and how I came to a point where I felt like I needed to make a choice between continuing to SEO/modify my writing or just “screw it” and write however I want and not care about the rest.  I left a comment on SHG’s blog about it, but thought it might interest readers, so I’m re-producing it here:

There’s definitely a pull towards writing that will be parsed/interpreted well by Google, as well as formatting articles in “list” fashion. I know when I started blogging, I was dutifully going down the SEO checklist of “how to produce content” or whatever. But it took me all of a few weeks before I got tired of doing it, said “screw it,” and began writing about whatever *I* wanted to write about, regardless of whether or not it would index well, or be easily shareable on social media, etc.

This is also precisely when my blog began to attract interesting comments and interaction with people who did more than comment “cool post!” or whatever. Substantive discussion in regards to what I was posting began to grow, and I started getting a lot more out of blogging. That’s not to say that it’s been perfect. There are occasions when I’ve taken the time to write something substantive that I thought was interesting and was hoping to get some feedback on – but no one replies. The next day I’ll bang something out without thinking about it – and it goes viral (relatively speaking for a law blog). But that’s just part of blogging.

I want eyeballs as much as the next writer. But I realized that a smaller number of quality eyeballs over a larger quantity of eyeballs results in a more enjoyable blogging experience for me. I’d much rather have fewer readers, if those readers are engaged, informed, and will push me with my writing and generate interesting discussion.

Interesting discussions don’t always happen, but when they do, it’s much more gratifying than a spike in traffic could ever be.