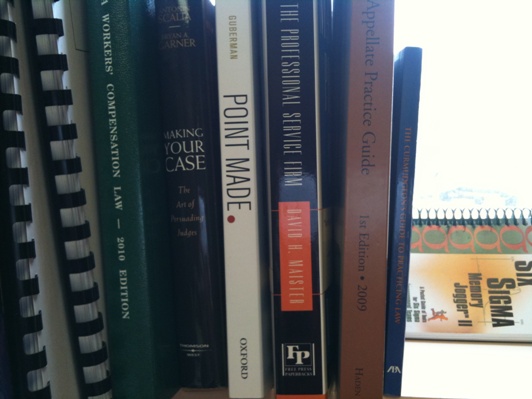 I’m rather passionate about legal writing. In particular, I’m looking for ways to improve my own. I think my writing is pretty good (I was number one in legal writing in my class for what it’s worth), but I know I have a long way to go to get it to “great.” As such, I follow a number of legal (and non-legal) writing blogs look for advice, tips, and deconstruction of good writing. I also regularly consume books on legal writing and general guides on how to become a better lawyer. One of the books I had been meaning to pick up for some time is Ross Guberman’s Point Made: How to Write Like the Nation’s Top Advocates, based upon the critical acclaim it has received.

A couple of weeks ago I came into my office to find a book-shaped package from Amazon in my chair. My first thought was that my brother-in-law MBA had sent me a book he thought I should read as he often does. Upon opening, I was surprised to find Point Made. I didn’t think I had mentioned it to him, but it was on my Amazon Wishlist of books to read. Did he see it there? Had I ordered it and forgotten about it?

Upon inspection of the invoice, I find that Mr. Guberman himself sent me a copy of his book. I was quite pleased to have received a copy of a book I was planning on purchasing anyway directly from the author. So, full disclosure, what follows is based upon a free, “review” copy of Mr. Guberman’s book. With that being said, it’s one of the best legal writing books I have ever read. It now sits snugly next to Antonin Scalia and Bryan Garner’s Making Your Case: The Art of Persuading Judges on my shelf.

Receiving the book when I did could not have been more fortuitous – I had a lengthy brief to write in support of a petition for a writ of mandamus due shortly. Point Made became a constant companion as I was writing the brief. For those not familiar with Point Made, it does not provide generic advice in regards to legal writing. It does not provide an introduction to legal briefing or describe the IRAC method. Instead, Point Made provides distinct writing techniques to be used in a legal brief, with examples from the writings of some of the top advocates in the nation. For example:

Brass Tacks: Explain “who, what when, where, why, how”

“Too often lawyers jump right into the legal nuances of the case without explaining, in clear terms, the legal context in which the case arises. ” -Wisconsin Supreme Court Chief Justice Shirley Abrahamson

The deeper you are into your litigation, the easier it is to forget what Chief Justice Abrahamson calls the “context in which the case arises.” That’s why so many lawyers’ preliminary statements make you feel as though you’ve been hit over the head with a hammer…

When Attorney General Eric Holder was in private practice at Covington & Burling, he once litigated a high-profile civil case involving bananas, American missionaries, and extortion in Columbia. He and his team started their introduction to a motion to dismiss with a Brass Tacks paragraph telling the court who the parties are, what happened to the plaintiffs, and when and where it happened when they brought their claim, what they want, and why they shouldn’t get it. Holder also squeezes in what the claims are not, highlighting the weakness of the plaintiffs’ case.

Plaintiffs in this action are relatives of five American missionaries who were abducted for ransom and tragically murdered in the mid-1990s by a communist guerilla group in Columbia, known as the Fuerzaz Armadas Revolucionarias de Coumbia. Now, more than a decade later, they seek to hold Chiquita Brands International, Inc. Liable for those deaths under the Antiterrorism Act, and Florida and Nebraska tort law. There is no allegation, however, that Chiquita was involved in the kidnaping and murder of the decedents, that Chiquita intended that these despicable acts occur, or that Chiquita even knew about them until plaintiffs brought this law suit. Instead, plaintiffs allege that Chiquita is liable for decedents’ deaths solely because Chiquita’s former Columbian subsidy made payments extorted by the FARC when this radical Marxist group controlled the remote banana-growing regions of Columbia in which Chiquita’s subsidiary operated.

Point Made is built around such examples. The book is broken into five sections: creating a theme and a compelling introduction (“The Theme”), laying out the facts and crafting a narrative (“The Tale”), structuring your argument (“The Meat”), livening up your style (“The Words”), and crafting a strong conclusion (“The Close”). In each section, Guberman uses examples like the above from some of the best legal writers in the nation to give real world examples of the techniques he describes.

Point Made is not an introductory level book. If you’re not familiar with basic legal writing, you might be better off starting somewhere else. But it might be the best technique oriented legal book I’ve ever read. Where Making Your Case provides what I think is broad, strategical approaches to writing; Point Made is a tactical book. Point Made provides granular-level advice that can immediately be implemented in your writing. I am loathe to come across so effusive in my praise of the book, as to appear biased.  But I can’t help but highly recommend the book, it’s that good. If you want to improve your legal writing, pick up a copy of Point Made.