How Young Lawyers Should NOT Conduct Themselves Online 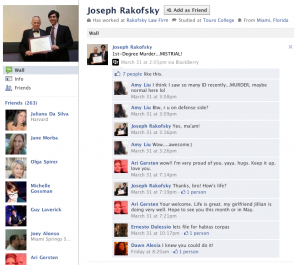 In a follow up to my post, How Young Lawyers Should Conduct Themselves Online?, here we have how young lawyers should not conduct themselves online.

In case you missed it, about a month ago a young lawyer by the name of Joseph Rakofsky, gained notoriety around the web after he received a reprimand at trial. From the ABAJournal:

A Washington, D.C., judge declared a mistrial in a murder case Friday, saying he was “astonished” at the performance of the defense lawyer who confessed to jurors he’d never tried a case before.

Judge William Jackson said lawyer Joseph Rakofsky did not have a good grasp of legal procedures, citing as an example the attorney’s rambling opening statement in which he told of his inexperience, the Washington Post reports. Rakofsky graduated from Touro law school in 2009 and obtained a law license in New Jersey less than a year ago, the story says.

Rakofsky had repeated disagreements with his local D.C. counsel, causing his client, Dontrell Deaner, to become “visibly frustrated,” the Post says. On Friday, Deaner told the judge he wanted a new lawyer.

The judge declared a mistrial after reviewing a court filing in which an investigator had claimed Rakofsky fired him for refusing to carry out the lawyer’s emailed suggestion to “trick” a witness, the story says. Rakofsky’s suggestion allegedly read: “Thank you for your help. Please trick the old lady to say that she did not see the shooting or provide information to the lawyers about the shooting.”

But that’s not the end to it. Afterwards, Rakofsky jumped on Facebook and proclaimed (via Military Underdog):

Wow. Well, no lawyer can be proud of this result, right? After all, you’re called incompetent, and the case is a mistrial as a result (meaning that the client has to spend a year or so in pretrial confinement waiting on the retrial). Plus, you are shown to be attempting to fabricate evidence. Clearly, you’re not proud of this, right?

Apparently Rakofsky was and bragged about it on Facebook.  There was a rapid withdrawal of Rakofsky’s online presence as soon as the ABA Journal, the Washington Post, and numerous popular law blogs began to take him to task.

Seemingly the whole thing had dropped off the radar a month ago.

Click here to access SCROLL, the online system of the Supreme Court of New York.  It reads like a who’s who of the blawgosphere, plus other traditional journos. Courtesy of Mark Bennett, you can read the complaint for yourself of what is already being referred to as Rakofsky v. The Internet*.

The attorney, 33, a 2009 graduate of Touro Law School, admitted to the judge that Deaner’s case was his first trial ever in a “rambling” opening statement, according to the Post. That revelation seemed to directly contradict the bio on his website, which claimed that he’d worked on murder, embezzlement, and conspiracy cases.

Rakofsky says both are true. Deaner is the first client he’s ever gone to trial for, but he’s got plenty of experience. “When I say I’ve worked on those cases, that doesn’t mean I’ve worked on those cases on my own,” he says. “I was working with other lawyers, interning and stuff.” The Post points out that though the website says the cases were filed in New York, Rakofsky isn’t licensed there.

5/13/11 12:30 CST Update: From the above story, a commenter claimed to be a juror on the trial. I had reached out to try and confirm but SHG (Rakofsky v. the Internet, TM) over at Simple Justice beat me to the punch, here is a relevant quote from the article:

Right now, I am looking at a letter adressed to me from Judge William M. Jackson, thanking me for my jury service on the Deaner trial….and I feel obliged to set the record straight as just that “indsider”. Additionally, I’d like to thank the judge for his extreme tolerance of Mr Rakofsky’s antics…..to those of us on the jury, we were stupified and, having sat on many trials in the past myself, Judge Jackson gave Mr Rakofsky as much “leash” as was professionally possible. It’s Mr Rakofsky’s own fault, and frankly narcissism, that allowed him to “hang” himself with that leash and draw a mistrial.

It was obvious from the opening statements that Mr Rakofsky was way out of his league and poorly trained for a proper court defense. Whatever momentary empathy any of us on the jury may have felt for Mr Rakofsky’s absolute ineptitude, were quickly absolved by our knowledge that a young man’s entire life was at stake. The absolute amateurish antics displayed by Mr Rakofsky were repulsive and oddly narcissistic. He had very little command of the law, and now hearing that Mr Deaner’s family actually hired him is truly upsetting. Most of us assumed that this was a court ordered public defender that may just have been too young and overwhelmed by a huge docket of cases to put together a proper defence.

Additionally, the quotes above from Rakofsky [as well as the Facebook entries] make my stomach absolutely turn. His poor performace was much much more than a lack of training and time….he truly had no grasp for how to handle a proper criminal court trial and it was obvious to EVERYONE in the court that he had trouble even putting a proper thought together, often repeating and repeating himself over and over to the audible gasps from the jury. Now, hearing his responses on facebook, I am truly repulsed that this “attorney” could defend his own actions while he wasted the time of the court, those of us on the jury, the money of DC taxpayers and most importatly jeopardized the life of the person he was defending. It’s an absolute travesty and mockery of the fragile system that protects ALL of our rights.

[The complaint] implicitly posits a standard of practice that I think is fairly labeled as The Rakofsky Standard.

I feel as though this is as good as place as any to put Mike’s reaction (of Crime & Federalism):