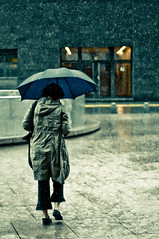 Here is the final excerpt from Dr. Robert Jeffery Sternberg’s book, In Search of the Human Mind, written in 1994. In it, Dr. Sternberg lists what he believes to be the twenty reasons why intelligent people fail. Now, regardless of public perception or personal anecdote, lawyers are intelligent people. Certainly some are more intelligent than others, but as a whole, they are intelligent people. Lawyers have: graduated from college, completed a graduate degree, and passed the bar exam. One might say this only makes them educated and not intelligent (a distinction not without merit), however for my purposes I am going to say that lawyers, in general, are intelligent.

Here are the top 5 reasons Why Lawyers Fail (my comments in bold):

5. “Inability to translate thought into action. Some people seem buried in thought. They have good ideas but rarely seem able to do anything about them.”

A lawyer is a knowledge worker. Lawyers are retained and paid because of their their knowledge and experience, but also on the ability to apply that knowledge and experience to problems and provide solutions. It can be easy to get so wrapped in the complexities and nuances of a legal challenge, that is difficult to actually put a pen-to-paper in order to craft a solution. Take careful consideration with your processes, but know when to wrap it up and take action.

4. “Using the wrong abilities. People may not be using the right abilities for the tasks in which they are engaged.”

‘When your only tool is a hammer, every problem looks like a nail.’ Don’t get caught in the trap of over-specialization. As lawyers develop, there is a tendency to narrow one’s skill and abilities to certain sub-sections of the law and with the broad spectrum of the law and dearth of lawyers, this is inevitable. However, make sure you approach a problem with correct focus and be mindful of the types of tools you will need to solve the problem.

3. “Lack of perseverance and perseveration. Some people give up too easily, while others are unable to stop even when the quest will clearly be fruitless.”

Law is hard. It can require long hours and sacrifice of one’s personal time. It can eat away at the rest of your life. Maybe you feel like you were tricked into the profession in some way. Grow up. You choose this path, walk down it with your head held high and persevere despite the obstacles in your way.

2. “Lack of impulse control. Habitual impulsiveness gets in the way of optimal performance. Some people do not bring their full intellectual resources to bear on a problem but go with the first solution that pops into their heads.”

This seems to be an increasing tendency in the Outlook/Blackberry/Text/Email/Twitter/etc world. People have come to expect such immediate responses to problems that often times whatever is offered as the first solution, is seen as the best solution – which is likely to not be the case. Lawyers solve problems, often times very complex and difficult ones. Take the time to give the problems in front of you their due consideration and not try to speed off to the next in the name of client service or billing.

and the number one reason is…

1. “Lack of motivation. A talent is irrelevant if a person is not motivated to use it. Motivation may be external (for example, social approval) or internal (satisfaction from a job well-done, for instance). External sources tend to be transient, while internal sources tend to produce more consistent performance.”

Motivation: it is the single most driving source that determines whether or not a lawyer succeeds or fails. The world is filled with bright, talented lawyers who have all the skills necessary to succeed at their craft but fail time and again because of a lack of motivation. What determines whether someone is motivated or not is the stuff that fills psychology tomes and graduate courses. The inner workings of someone’s mind and what motivates them to act is often a mystery – not just to others but to themselves.

Is it intrinsic or learned behavior?

Are lawyers not motivated because they might fail? Or because they might succeed? After which, people will expect them to succeed again and again and they don’t feel as though they are up to that task. They fear, not failure, but their own success, so they never motivate themselves to meet the challenge.

—————————-
So there we have the Top Twenty Reasons Lawyers Fail. In case someone wanted to review these at a later date, I thought it would be easier to compile them into one place as opposed to forcing readers to jump all around the website. As such, I compiled the list into a free PDF available below and at the right hand menu. (Adobe Reader or equivalent required. Free download. That being said, most everyone should have this software installed on their machine already. But you never know)

If you’ve enjoyed this post, please consider subscribing via email or RSS on the menu to the right. I won’t ever spam you or disseminate your email address. An Associate’s Mind puts out at least one genuinely valuable article for attorneys a day and periodically features free printable guides like the below and subscribing is the one way to be sure you don’t miss out.