Reason.com has a great article focusing on innovation up that is adapted from Matt Ridley’s book, The Rational Optimist, entitled Ideas Having Sex. An excerpt:

Innovators are in the business of sharing. It is the most important thing they do, for unless they share their innovation it can have no benefit for them or for anybody else. And the one activity that got much easier to do after about 1800, and has gotten dramatically easier recently, is sharing. Travel and communication disseminated information much faster and further. Newspapers, technical journals, and telegraphs spread ideas as fast as they spread gossip. In a recent survey by the economists Rajshree Agarwal and Michael Gort of 46 major inventions, the time it took for the first competing copy to appear fell steadily from 33 years in 1895 to three years in 1975. And the speed has increased ever since.

When Hero of Alexandria invented a steam engine in the first century A.D. and employed it in opening temple doors, news of his invention spread so slowly and to so few people that it may never have reached the ears of cart designers. Ptolemaic astronomy was ingenious and precise, if not quite accurate, but it was never used for navigation because astronomers and sailors did not meet. The secret of the modern world is its gigantic interconnectedness. Ideas are having sex with other ideas from all over the planet with ever-increasing promiscuity. The telephone had sex with the computer and spawned the Internet. 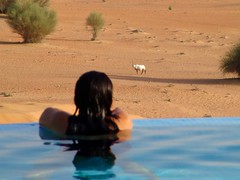 As the article highlights, innovation is fueled by openness and exchange. I think it’s easy for lawyers to fall into the trap of trying to protect and guard their knowledge and experience. I’ve said before that many older lawyers don’t seem to like blogging, etc because they’re not receiving any consideration for them freely sharing their experience. This is understandable as the effort to become a lawyer and then further specialize in a certain practice area is no easy task.

However, the reality is that change and innovation are going to happen regardless. The only rational option is to embrace innovation and make it a defining characteristic of the type of lawyer you want to be – to do anything less is to be left behind by those who are defining the future.