Here we have part III of Postcards from the Bar Exam – Ithaca Law Grad 1988 (Part I here Part II here), kindly provided to me by Carolyn Elefant ofMy Shingle. Ms. Elefant’s advice to herself in 1988, remains true for law students today.

When in Rome, do as the Romans… When traveling, I prefer to emulate the natives; if not merely to avoid standing out, but also because cultural immersion makes my vacations more exotic and exciting. When taking the bar exam, I have no choice but to do so as the bar examiners would do – or fail the test. 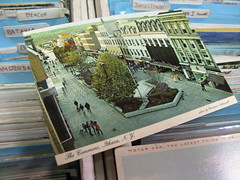 Doing what the bar examiners would do on the bar is not of itself an inherently disturbing task. But often, what the bar examiners would do (as I have learned after countless practice questions) runs so counter to my sense of reason and justice that I’m offended. For instance a recent question asked what an attorney’s best defense would be for his client, who had been accused of rape. The correct answer was that the client should admit that he had committed the rape, since if he had actually compelte the act, he could not be convicted of merely attempting to do so. While such an answer may be analytically pleasing, pursuing such a course of action would be stupid and shameful. After all, what sort of competent attorney would ever try to defend a client accused of attempt by counseling him to admit to the crime?