The Inverse of Informative 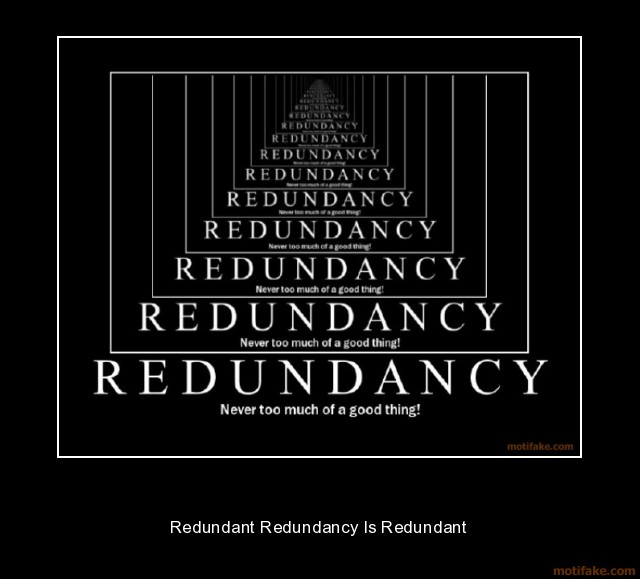 At first blush, I imagine many will lament the latter as a denigration of speech by young people immersed in text messages and Twitter. It certainly resembles such communication – truncated and stripped of the niceties of language. And although the latter message is abrupt, it also fully conveys the same information as the former. They are essentially the same message.

The above messages weren’t thumb’d by a distracted teenager, but written by Richard Dawkins in an article for the Skeptic in 1998, titled The Information Challenge (the mention of the Concorde should have at least clued you in that the message was a bit dated). The article discusses information theory and its application to the question of whether information content of genomes increases in evolution. Leaving the evolutionary question aside, here is the excerpt on information theory. 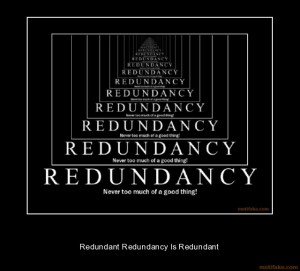 The technical definition of “information” was introduced by the American engineer Claude Shannon in 1948 (Note: See A Mathematical Theory of Communication Warning: PDF & contains math). An employee of the Bell Telephone Company, Shannon was concerned to measure information as an economic commodity. It is costly to send messages along a telephone line.

Much of what passes in a message is not information: it is redundant. You could save money by recoding the message to remove the redundancy. Redundancy was a second technical term introduced by Shannon, as the inverse of information. Both definitions were mathematical, but we can convey Shannon’s intuitive meaning in words.

Redundancy is any part of a message that is not informative, either because the recipient already knows it (is not surprised by it) or because it duplicates other parts of the message.

Shannon wanted to find a mathematical way to capture the idea that any message could be broken into the information (which is worth paying for), the redundancy (which can, with economic advantage, be deleted from the message because, in effect, it can be reconstructed by the recipient) and the noise (which is just random rubbish).

It is related to the other sense — “that which is not duplicated in other parts of the message” — because repetitions lose their power to surprise. Note that Shannon’s definition of the quantity of information is independent of whether it is true. The measure he came up with was ingenious and intuitively satisfying.

So then information that is surprising or reduces ignorance is of high value, while redundant information is of little to no value. For people and companies that produce content (information to be consumed) – whether it be blogs, video, magazines – it is worth deconstructing the content in a surprise-value/ignorance-reduction context. To do so, merely ask two questions:

If the answer to both questions is “no,” then the content is likely redundant and not very interesting to anyone; i.e. – it is not valuable information.

Unfortunately, content that would not answer in the affirmative to either of the above questions litters the internet. SEO gurus and Social Media Marketers flitter about generating low value content in bulk, in hopes to overcome Google with volume, competing for PageRank and that elusive “first page” status in Google search results. This is a universal problem that Google and other search engines combat daily – how to cull the wheat from the chaff.

They do a remarkably good job of it really. But the web is immense, and Google and other sites must rely on bots to scour the Internet to present information its users. The bots are not asking the the above questions when they scan content, but rather:

This is where people try and “game” the system. Marketing gurus/lifestyle entrepreneurs/hucksters construct networks of blogs, social media accounts, podcasts, and videos that all point back to a central landing/lead-capture page. The lead-capture page will either be lined with ads or affiliate links, or directed sales copy that is an extension of the search phrase. The goal of these pages is to not to convey information, but to convert searches into sales.

While deceptive and distasteful, it’s really not that big of a problem if all you are doing is selling Empty White Boxes. 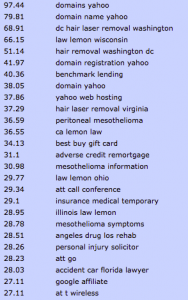 But if you look at the top paying search phrases for Google AdSense, you’ll notice that many of them are legal related (See right). That is, advertisers pay extremely highly when someone clicks on an ad related to that search phrase. The underlying idea is that these people have been potentially wronged in some way, are under legal duress, and in search of a lawyer.

So marketers, and law firms themselves, create elaborate multi-layered marketing strategies to target users searching for these phrases. Lawyers without the deep pockets to pay for Google Ads and marketing firms (or aiming for disintermediation),  turn to low cost methods of targeting these search phrases. The easiest and often most effective is blogging.

Blogs have come to be seen as trustworthy sources of information by many consumers. The general look, feel, and informal tone are perceived by many as somehow more “authentic” traditional forms of broadcasting information. Lawyers have taken to blogging in droves. Some for the purpose of attracting clients, others to display expertise, while others see it as a means to discourse amongst their peers and provide a public forum for the education of citizens regarding the law.

But “Mainstream” blogs hardly qualify as blogs any longer. Sites like SCOTUSBlog have ceased to be blogs and have become full-on news destinations. The personalities and marketers are perhaps better classified as blawgers and flawgers.

At some point, someone thought it would be cute to use the term “blawg” to define those blogs which focus on substantive legal content, generally written by lawyers or law students in order to separate them from blogs written by those without a legal background.

These blawgs seek to answer the surprise-value/ignorance-reduction questions in the affirmative. They provide detailed analysis of case law and current events in the legal world. Blawgs like Simple Justice, Technology & Marketing Law Blog, Kennerly’s aforementioned Litigation & Trial, and many others all seek to offer “new information” and “reduce ignorance” with their content.

On the flip side are flawgs. Coined by Canadian lawyer Antonin Pribetic, flawgs are “legal blog(s) without any substantive legal content that is created, monetized and promoted exclusively for profit.” These flawgs attempt to be relevant to the search phrase entered by a user of Google, not provide information or reduce ignorance.

While nominally an advertisement for a marketing firm, the below video perfectly illustrates what flawgs are and why they are looked upon as insulting and unethical (video via My Law License):

Flawgs similar to those in the above video define redundancy. They do not transmit new information and they certainly do not reduce ignorance. They are meant for one thing only: conversion. It is a sales page in the trappings of expertise, duplicitous in nature, and meant to take advantage of those seeking assistance in a time of crisis.

They’re everything wrong with legal marketing and a great example of the difference between something that is genuinely trying to engage in ignorance-reduction with its readers (blawg) and something that’s just a thinly veiled sales pitch (flawg).