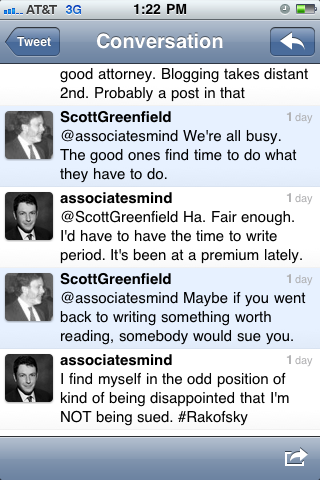 So, as I’m sure most of you probably already know, Joseph Rakofsky has once again emerged from the shadows to test the bounds of reason, good sense and the law by filing…whatever the hell this is. If you’re not familiar with Jo-Jo, you can read my initial accounting of the whole thing here. For an update on the current situation, I’d suggest you read George M. Wallace’s Rakofsky v. Internet update at Declarations & Exclusions.
I was driving at the time the news dropped on Twitter. I asked if I was one of the added defendants as yet, and was told I was not.  In response I stated,

I find myself in the odd position of kind of being disappoint that I’m NOT being sued.

Which resulted in the following exchange between myself and Scott Greenfield of Simple Justice (read in reverse order):

Read in reverse order, from bottom to top. 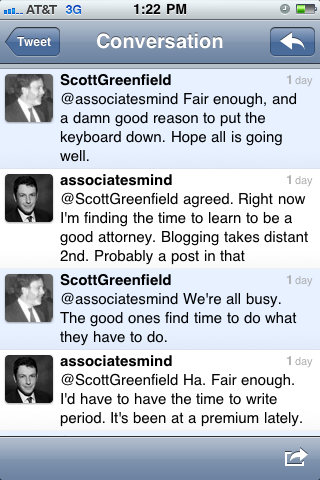 Read in reverse order, from bottom to top.

I haven’t had as much time to write and update this blog of late. But I refuse to let it lie fallow and try to put up at least 1-2 posts every week as a matter of principle and discipline. But the posts have not been as in-depth as they have been in the past as my time and energy have been focused of late on one simple, over-riding goal: becoming a good lawyer.

Becoming a good lawyer requires failure. It requires screwing up a motion and having to re-draft the entire thing. 3 hours of research down the hole only discover a new case that destroys your argument – then writing off that time from your billing and not charging the client because it’s your fault. It’s mis-communication between lawyer/client/opposing counsel/third-party counsel/doctor/court reporter throwing everyone’s schedule out of whack.

It requires 6 hours of round-trip travel in the car for a 20 minute hearing. Early mornings and late nights at the office. Hours away from your family and friends. Time away from your hobbies, projects, and past times.

It’s a 100 little errors and cracks and slip-ups that come through your work when you first start out as a lawyer. You’re learning the ropes. You can’t anticipate exactly how things are going to go. You fall on your face again and again…all at the expense of your client. Your mistakes become their loss.

Or not, if you are as fortunate to join a firm as I was. My failures never leave the office. They are purely internal. My work is reviewed, scrutinized, edited, and improved. I’m sent back and told to try again. I receive advice on how to handle matters. I have fellow associates with who I can commiserate and bounce ideas off of.

Even if I had not joined a firm, I have lawyers that I could rely on. Outside of the office, I maintain relationships with lawyers that I have come to know and respect from the past few years of law school who I can meet for lunch or pick their brain. Every lawyer in the city knows of the 3 or 4 buildings downtown next to the Courthouse that are the typical “starter homes” of new solos and more established small firms. Generally speaking, they’re all willing to “pay it forward” – offer advice or lend an ear to a new young lawyer in need. There are even a (very) small group of lawyers online that that I have solicited non-legal advice from on occasion.

Simply put, new lawyers need a support structure that allows them to fail, learn, and grow in order to develop into good lawyers.

Or at least…that’s what I think right now. What I think could, and probably will, change in the following years. The truth is, I don’t know what it takes to be a good lawyer. I’m too new, still learning the ropes. All I can do now is bare down, be prepared, communicate well, struggle with balance, seek feedback, learn from my mistakes, and do everything like I give a damn.

In many ways “experience” is merely an accumulation of our mistakes and what we learned from them. How we handle these mistakes is what determines our growth and improvement as lawyers – as human beings.

But, you can also learn from the tribulations of others. SHG speculates that Jo-Jo traveled too far down the rabbit hole and in the clutches of pathological obsession. Brian Tannenbaum asks what if Jo-Jo had a mentor? I can’t speculate on Jo-Jo’s mental state or lack of mentorship, but new lawyers should hopefully be able to learn from his mistakes.

Don’t bite off more than you can chew. Know that you don’t know it all. Find other people who you can rely on for advice and perspective.

Know when to let it go.

If you want more advice, insight, and thoughts on what it takes to find success as a new lawyer, consider picking up my book, The Marble and The Sculptor: From Law School To Law Practice. A partner at an AmLaw 150 firm described the book as: “[a] how-to manual for newly-minted lawyers [that] would not require much revision to serve as a how-to manual for success in any career, or even in life.”